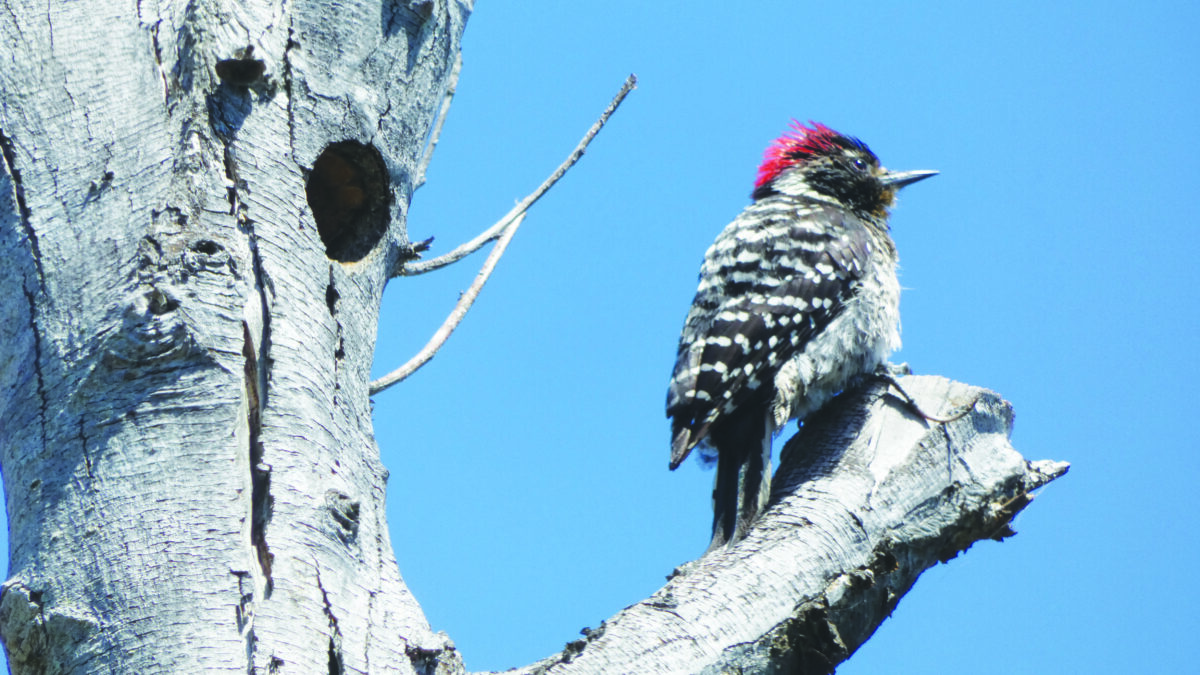 A male Nuttall’s woodpecker on guard duty at the entrance to the nest. The male helps incubate the nest at night and keeps a watchful eye on things during the day while his mate is in the nest. Males of this species have that beautiful red panache of feathers; females are plain black and white. Photo by Suzanne Guldimann

No one sends them cards for Mother’s Day or Father’s Day or buys them flowers or ties, but there are some outstanding parents in Topanga’s animal kingdom. Species that raise their offspring cooperatively include a wide range of birds and Topanga’s two native wild canine species.

The male western bluebird not only helps build and guard the nest, he shares feeding and janitorial duty with his mate, bringing caterpillars and grubs to feed rapacious hatchlings and carrying away droppings to keep the nest clean.

Male great horned owls hunt food for the female while she incubates the eggs and while the chicks are too young to be left alone. Later, both parents share the task of feeding their chicks, and continue to keep a watchful and protective eye on fledgelings as they leave the nest.

The male Nuttall’s woodpecker is the sole architect of a mated pair’s treetop home. He uses his powerful bill like a jackhammer to excavate a nest hole in a dead tree. The cavity he carves out can be the size of a basketball. Inside, woodchips form a soft nesting material to cushion the eggs.

The male shares incubating duty with the female, often sitting on the eggs through the night. Both parents work together to feed their hatchlings and keep watch on the nest, which they defend from other birds looking for a turnkey apartment, and marauders like squirrels who will prey on nestlings or eggs.

Acorn woodpeckers also carve out nest holes for themselves and males and females share parenting duties, but they have help from family members. These colorful woodpeckers live in large, multi-generational family groups and help each other raise and guard their young and gather and store acorns.

A food storage tree, officially known as a “granary tree,” may have hundreds of carefully drilled holes, each one just the right size to store a single acorn. These trees are used by generations of birds, every family member helping to find and store a treasury of acorns.

Male and female crows not only cooperate to raise their young, older siblings often stay with the mated pair to help raise the next generation of hatchlings, learning critically important parenting skills. Crows also come together to protect each other’s nests from potential predators like hawks and owls, ganging up to mob an enemy.

William Kilham, a virologist turned birdwatcher, spent more than 8000 hours researching crows in the 1980s. He was one of the first researchers to document previously anecdotal accounts of crow behavior like young crows helping with all aspects of raising their parents’ next brood.

“Crows are something special,” Kilham wrote. “Crows, and with them I include ravens, seem as though by convergent evolution to have something in their psyches corresponding to something in our own.”

Kilham published more than 90 scientific articles on bird behavior. His book The American Crow and Common Raven includes many of his groundbreaking observations. Kilham describes how the male crow and the pair’s helpers bring food for the female while she incubates the eggs. He documented the male and the helpers bringing sticks and nesting material to the female, who was the main architect of the nest, and how crow parents and their helpers continue to feed young birds after they leave the nest.

Crows fledge at five or six weeks, but unlike many bird species that are on their own once they are out of the nest, young crows continue to be watched over by their parents for months or even years.

A crow behavior study led by Kevin McGowan of Cornell found that crows only struck out on their own to mate and breed after a minimum of two years. In some instances young crows stayed with their family for as long as five or six years.

Among native mammals in the Topanga area the parenting prize goes to gray foxes and coyotes.

The male gray fox protects the den and brings food for his mate and cubs. He also helps teach the young foxes to hunt and look out for themselves. Gray foxes are solitary for much of the year, but pairs are often monogamous, coming together each year to mate and raise their young.

Coyote pairs may stay together for their entire lives. Males help feed and care for pups, and if one parent is killed, the other will continue to care for the young. There are documented cases of coyotes adopting orphaned pups.

Coyote pups depend entirely on their parents for the first several months. The parents continue to teach and protect the young for nine months. Adventurous young coyotes may disperse in the autumn when they are fully grown, but young coyotes often stay with their parents to help raise the next litter of pups and learn parenting skills.

There are documented cases of young coyotes on their own and coyotes who have lost their other family members being adopted by the alpha pair of another family.

Coyotes are not always loved by their human neighbors but they are more like us than most people realize.

Unlike coyotes, mountain lions are loners. The female raises her young on her own. The National Park Service recently announced the discovery of three new mountain lion kittens in the Santa Monica Mountains—P-82, P-83, and P-84, the offspring of P-63 and female mountain lion P-54.

P-63 is one of only a few mountain lions to successfully cross over the 101 Freeway from the Simi Hills into the Santa Monica Mountains. P-56, the only other male mountain lion in the Santa Monica Mountains portion of the NPS radio tracking program, was shot and killed earlier this year after the Department of Fish and Wildlife issued a controversial depredation permit, leaving P-63 as the only identified male in the local range.

While P-63 will take no part in raising his kittens, he brings much-needed genetic diversity and has given new hope for the future of this small and fragile population of mountain lions.

Coronavirus stay-at-home orders have given many of us an opportunity to get to know our wild neighbors better as we spend more time at home and in our gardens. Observing wildlife reveals that their lives are not unlike our own, and that family is at the heart of all of our worlds.

We can help our wild neighbors by slowing down on canyon roads, making sure domestic animals stay indoors or are securely fenced, and having patience with crow babies screaming for food first thing in the morning, or songbirds nesting in that hanging plant on the patio. Wildlife is one of the things that makes Topanga special, and all around us this time of year animals are raising their families alongside our own.

Angels and Aliens: Encounters with Zooplankton