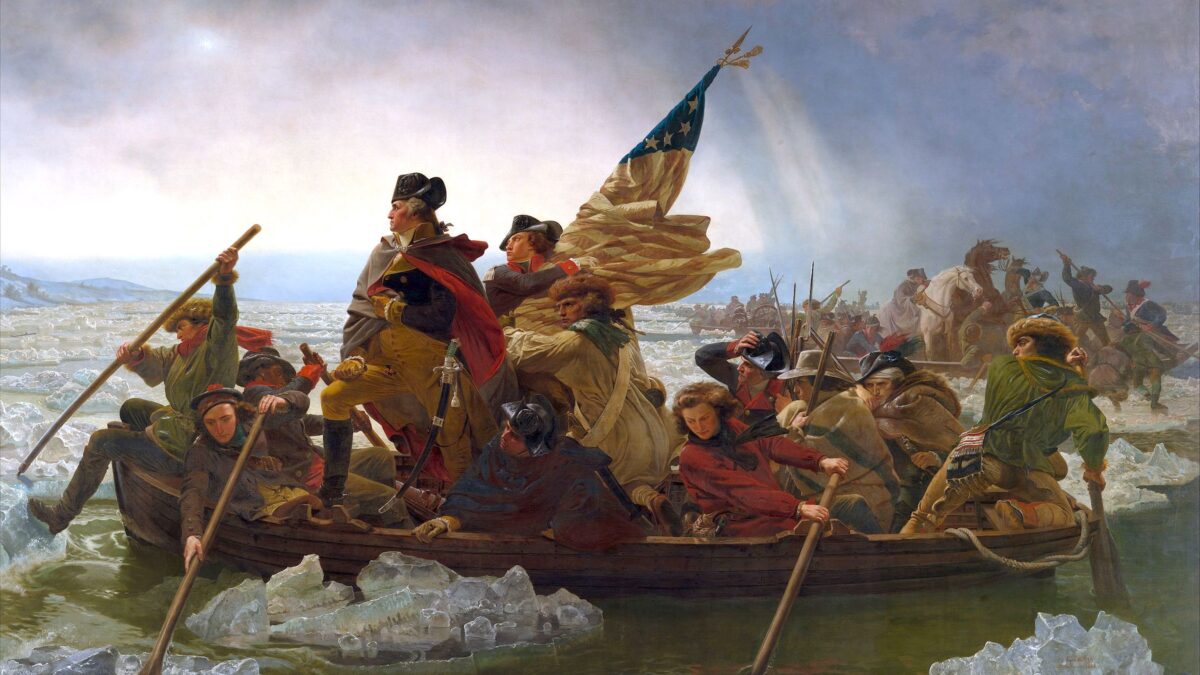 Emanuel Leutze’s romantic painting of George Washington’s crossing of the Delaware River has become a defining image of the Revolutionary War. It’s a great example of how artists, writers, and filmmakers interpret, popularize, and even redefine history. This painting has a history of its own worthy of a novel or a film. The original, painted in 1851, was destroyed in a bombing raid in Bremen, Germany, during World War II. Leutze, however, had created two additional copies of his popular painting later in life: one is now in the Metropolitan Museum of Art in New York City. The other is in the collection of the White House, in Washington, DC.
Feature, Storyland

Historical Fiction Brings the 4th of July to Life

On Independence Day the nation reflects on its war stories. Stories about the revolutionaries who stood up to tyranny, and who handed down to us the precious experiment in self-governance. These stories are the fabric of our national patchwork quilt. Longfellow immortalizes Paul Revere’s ride in an anapestic tetrameter that beats like a galloping horse. Patrick Henry defies death with fiery oration. The thinkers, John Adams, Ben Franklin, and Thomas Jefferson, hash out the wording of a treasonous Declaration of Independence—while men of action, Ethan Allen and the Green Mountain Boys, capture Fort Ticonderoga unawares. A shot is heard around the world. Betsy Ross sews a flag, as apple pie cools on the window ledge.

How do these stories seep into our collective mind and influence our world perspective? Artists have interpreted these stories for us, as much as historians. Here are some of the sources.

Narrative nonfiction can be engaging, but sometimes it can be a chore to read, dry and stale, lacking detail and personal connection.  On the other hand, when novelists, poets, illustrators, filmmakers, bards, and painters tell us a story, it’s entertaining. After interest is piqued, readers can come back to non-fiction sources to fact check and learn more.

Vietnam veteran and bestselling author Tim O’Brien tells us this from The Things They Carried:

“A true war story is never moral. It does not instruct, nor encourage virtue … If a [war] story seems moral, do not believe it. If at the end of a war story you feel uplifted, or if you feel that some small bit of rectitude has been salvaged from the larger waste, then you have been made the victim of a very old and terrible lie. … you can tell a true war story by its absolute and uncompromising allegiance to obscenity and evil. … in any war story, but especially a true one, it’s difficult to separate what happened from what seemed to happen. … When a booby trap explodes … the pictures get jumbled, you tend to miss a lot.  … a true war story cannot be believed. Often the crazy stuff is true and the normal stuff isn’t. … a true war story, it’s just beyond telling.”

Experiencing history from the perspective of a fictional character, as if you are there in the past with them, creates an emotional connection to past events. Historical fiction puts faces on statistics.

When immersed in a novel, people tend to be open-minded, less entrenched in their opinions. Historical fiction can be a palatable way to digest complex information and gain understanding of nuanced issues— not everything is black or white—not everyone is just a good guy or a bad guy.

Be Swept Away by a Period Piece

In film and television, settings are created to evoke a bygone world filled with enough detail to convince you that history is happening as you watch it. The combined talents of the actors, set designers, prop masters, costumers, dialect coaches and others recreate a moment in time and the characters that inhabit that era, with contemporary storytelling sensibility.

Hamilton, An American Musical—the hip-hop phenomenon. (2015) Lin-Manuel Miranda.  The show won both the 2016 Pulitzer Prize in drama and the Tony Award for best new musical.  A live capture of the stage show will stream on Disney Plus beginning July 3.

Botanical Gardens Are Open and in Bloom