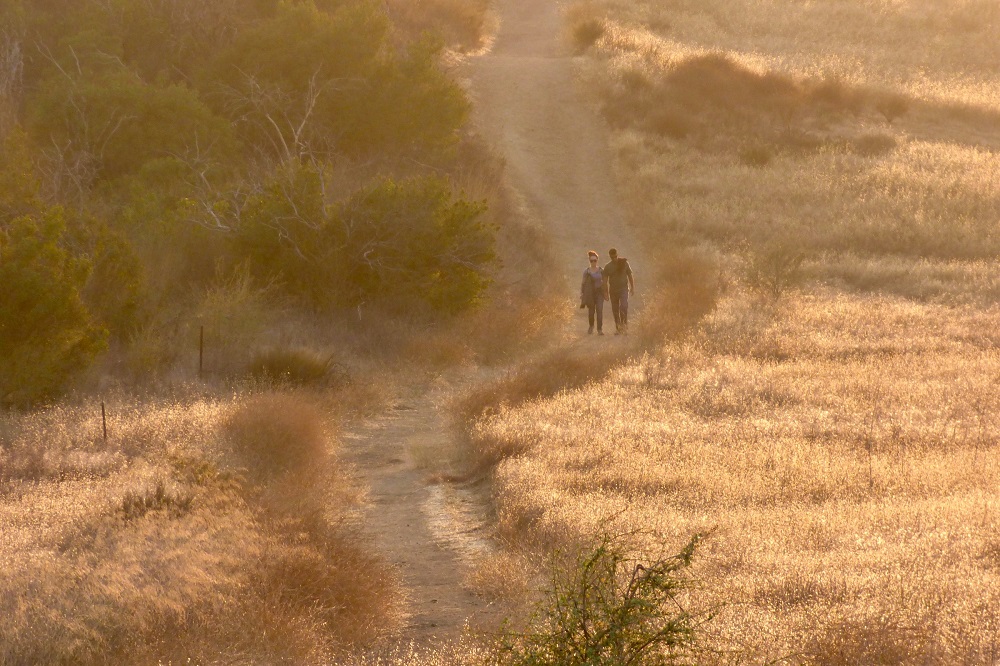 Trails have been crowded throughout the Santa Monica Mountains this summer, but one often has even the most popular trails to ones’ self in the late afternoon, and this is arguably the most beautiful time of day in late summer. Photo by Suzanne Guldimann
Engage

On the Trail in August

Late summer in the Santa Monica Mountains is a season of morning fog, scorching afternoons, and tropical sunsets—the perfect time of year for a late afternoon hike.

Although this is the peak of the dry season, a scattering of wildflowers still create a blaze of color in the canyons. Look for the pale purple stars of the California aster (Corethrogyne filaginifolia), the vivid red tube-like blossoms of California fuchsia (Epilobium canum) that are a favorite source of nectar for hummingbirds, and the small but vivid flowers of the aptly named sawtooth goldenbush (Hazardia squarrosa). The most abundant late summer flower is California buckwheat (Eriogonum fasciculatum), which covers the hills with cream-colored or dusty pink clusters of tiny flowers and blooms well into autumn. This is a critically important source of food for pollinators, and its rusty red seeds are a staple food for a wide range of insects, birds, and small mammals.

There are a surprising number of butterflies this time of year, too. The anise swallowtail and the monarch are the largest and most colorful late summer butterflies, but cloudless and copper sulfur butterflies are also on the wing, along with a host of tiny hairstreaks and marine blue butterflies.

A late August evening is the ideal time to catch a glimpse of one of Topanga’s more elusive residents, the tarantula. This gentle giant of the spider family is usually only seen in late summer, when male tarantulas, responding to biological need, leave the safety of their burrows to look for a mate. The local species can deliver a painful bite if provoked, but its venom is not dangerous and this spider is rarely aggressive.

The constellation Scorpio dominates the night sky in August, and its terrestrial counterpart is also active at this time of year. There are at least three species of scorpion in the Santa Monica Monica Mountains. None of them are highly venomous, although they can all sting if they need to defend themselves.

A UV flashlight is ideal for looking for scorpions after dark—they fluoresce a vivid turquoise color. It’s a good idea to look carefully before sitting down outside this time of year, and not to leave shoes or other clothing out overnight.

Topanga residents may be more likely to find the resident mule deer nibbling the rose bushes in the garden than on the trail this time of year, but late summer is a great time to look for the footprints of deer and other wildlife. The thick dust on the trails holds an entire chronicle of unseen lives.

A record number of hikers have hit the trails in the Santa Monica Mountains this summer, resulting in a record number of rescues. Heat exhaustion is at the top of the list for emergency calls (followed by falls and people getting lost after nightfall). A late afternoon or early evening hike avoids the hottest part of the day and peak crowds.

It’s a good idea to be aware of the symptoms of heat exhaustion —headache, dizziness, fatigue, feeling cold and clammy despite the heat, and to bring plenty of water, no matter what time of day one heads out.

Wearing layers of clothing can help to weather fog or heat. Always bring a flashlight in addition to a cell phone on evening hikes. It’s never a good idea to stray off the trail, but the hazards, including encountering a rattlesnake or turning an ankle are greater at dusk, when visibility is poor.

Cloth face coverings remain de rigueur, even out in nature. Many trails are too narrow to pass oncoming hikers while maintaining six feet of distance. Expect to encounter more fellow travelers this summer than in previous years, and be ready to step aside to let other hikers pass.

Topangans are blessed with miles of trails within easy reach, and for many this year, those trails have become a lifeline—a place of peace and refuge. Even with increased crowds and during the hottest time of the year, they offer a welcome respite from worries and the world. Timing a walk to take advantage of cooler evening temperatures and diminished crowds can help increase that sense of peace. n

For information on trails in Topanga and throughout the Santa Monica Mountains National Recreation Area, visit nps.samo.gov

The Great Outdoors, Back to School & FocusFish