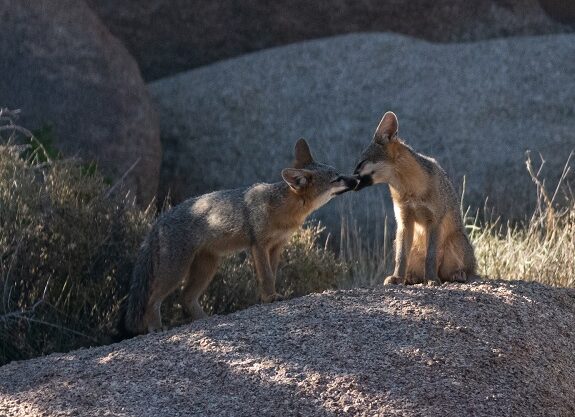 This pair of gray foxes was photographed in Joshua Tree National Park, but the same species lives right here in the Santa Monica Mountains. Gray foxes are shy and good at avoiding humans, but they still make their home here. Photo: Alessandra_Puig-Santana, NPS
Discover

Topanga’s resident coyotes make their presence known, and the local mountain lion population has gained celebrity status in recent years, but there are several native predators who are so secretive and rare many people are unaware that they still live among us.

Like the coyote, the gray fox (Urocyon cinereoargenteus) is also a member of the canine family, but this animal is much smaller and more elusive than the coyote. The gray fox is often described as “the cat of the dog family,” because it has semi-retractable claws that make it an expert at climbing fences and even trees. Like cats, gray foxes hunt mice, rats, insects, and lizards, but they also have a taste for fruit.

Gray foxes are rarely seen but it is not unusual to hear their harsh barking cry at night, especially in the spring and early summer, when mated pairs work cooperatively to raise their young.

Everyone who has ever spent time in the Santa Monica Mountains has encountered the resident raccoon population, but like the coyotes, these clever and feisty omnivores have a smaller, shyer, seldom seen cousin. Bassariscus astutus, the ringtail, is a small carnivore with a pointed, fox-like face and an enormous, bushy, striped tail that is longer than its body. The ringtail has a much wider range of vocalizations than the raccoon, which tends to limit its remarks to growls and snarls. The ringtail’s vocabulary ranges from growls to metallic clicks and a banshee-like ululation. The unusual noises and distinctive appearance have led more than one observer to think they have caught sight of an escaped exotic.

Wildlife authorities say that a “lemur” on the loose that was reported by Calabasas media several years ago was almost certainly a ringtail and not some wealthy eccentric’s illegal pet.

The ringtail is nocturnal, intelligent, solitary and extremely shy.  Its preferred food consists of rodents, small reptiles and insects, but it will also eat native fruits and berries. Roadkill can tempt this increasingly rare animal on mountain roads where it is, in turn, vulnerable to being struck. The ringtail appears to be declining in California due to habitat loss and fragmentation but they still have a toehold in the Santa Monica Mountains. This species is classified as a fully protected species in the state.

Like the coyotes and the raccoons, the common striped skunk also has a smaller, rarer relative in the Santa Monica Mountains, Spilogale putorius, the spotted skunk.

Arguably one of the prettiest native mammals in the local mountains, this little omnivore has become vanishingly rare, but it still finds a home deep in Topanga’s canyon terrain.

Spotted skunks hunt for mice and other small rodents. They also eat insects. Like their larger cousins they are armed with a powerful scent weapon, and like other skunks, they also have poor vision, leaving them vulnerable to vehicle strikes.

The American badger (Taxidea taxus) is another mountain resident that is seldom observed by humans. Instead of being the smaller version of a better known species, this is a bigger, fiercer relative of the charismatic European badger.

Never present in large numbers, this member of the mustelid—weasel—family has been severely impacted by habitat loss. The badger’s preferred prey species include gophers and ground squirrels. Powerfully built and large—about the size of a cocker spaniel dog, the badger is a fierce fighter who can usually stand up to dogs, coyotes and even bobcats, but it is no match for traffic and is at risk from rodenticide poisoning.

Badgers prefer the less developed portions of the Santa Monica Mountains but are occasionally sighted on the outskirts of more urban areas. This species’ population continues to decline and they are currently listed as a species of special concern by the state of California.

The long-tailed weasel is a distant relative of the badger who also makes its home in the Santa Monica Mountains. Small and long, swift and agile, this sleek mustelid is a ferocious hunter and can tackle woodrats,  gophers and ground squirrels bigger than itself. It often stores or caches part of a kill for later, keeping a larder in different locations throughout its territory.

Although it prefers to stay away from humans, the long-tailed weasel has been observed hunting in backyard wood piles or even under outbuildings. Each adult roams over a surprisingly large territory—sometimes as much as 80 acres. Although they are incredibly fierce for their size, the long-tailed weasel is no match for a house cat and is also at risk from rodenticides.

All of these species live unseen in Topanga’s backyard, but like the area’s more high profile wildlife, they are also increasingly at risk from habitat loss, secondary rodenticide poisoning, and vehicle strikes.

Topanga residents can help local wildlife by remembering to slow down on the road, eliminating toxic rodenticides and making sure cats and dogs are safely inside at night.

One of the things that draws people to this community is the abundant wildlife, but many don’t realize just how many species live here. We share our mountains with some amazing creatures, even if we never see them.