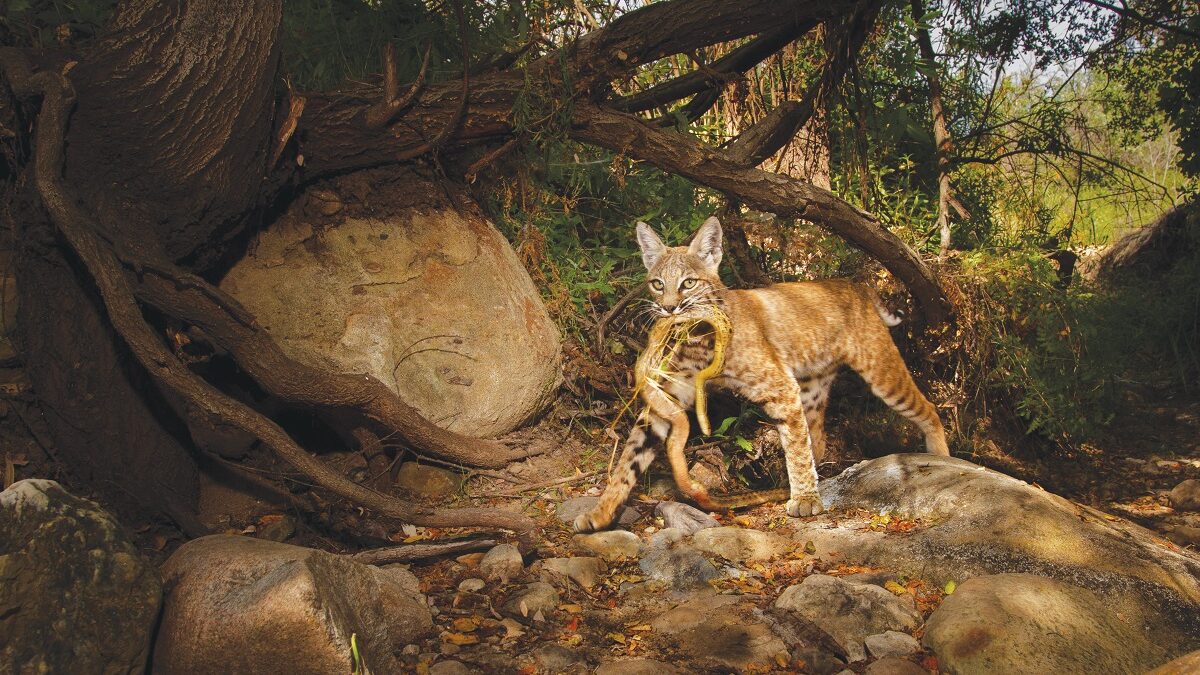 Jasper Baur, nature camera trapper, says this of his final bobcat shot: “Mouthful. Here is my last shot from the bobcat series. A female bobcat with a 4ft gopher snake. This was an incredible way to wrap up this camera trap set up that was out in the field for three months straight. I will make sure to continue keeping a close eye on this pair of bobcats!” Photo by Jasper Baur
ArtBeat, Discover, Topanga Life

Jasper Baur and the Digital Art of Camera-Trapping

“Every moment I spent hiking in Topanga was a learning experience,” Jasper says. “Under every oak canopy, in the winding creeks, and in all the dense thickets of chaparral were mysteries to uncover. Photography became my way of preserving the beauty in Topanga Canyon.”

After archiving his personal work for some time he realized that his digital photography could play an important role in environmental conservation.

“Photographs of local seldom seen wildlife like bobcats captures unseen behavior that is useful for conservationists.”

For the past four years he has been participating in an independent studies block with an opportunity to explore photography. His junior year he began developing and designing new ways to enhance camera trapping with the end goal being to photograph a bobcat. These photographs in large volumes can significantly contribute to scientific research.

“Camera trapping is a method used to photograph seldom seen wildlife in their natural habitat without influencing their behavior,” Jasper explains. “In order to camera trap you need to have a DSLR* camera, multiple external flash units, a motion sensor, and a lot of patience.”

Every camera-trapped image frame includes useful information such as the date, time, temperature and even the lunar cycle.

“I managed to find a male and female bobcat who followed the same web of game trails. Over the course of a month I was able to learn their behavior and their preferred trail. I set my camera out where I knew they would be traveling and captured an image of the female. Ever since then I have been monitoring and photographing the same pair of bobcats.”

Jasper considers his teachers at Manzanita School to be some of his greatest guides. “I am so lucky to attend a school where we practice various forms of nature connection,” he says. “A naturalist and one of my great mentors, Delmar has shared many stories from his incredible nature encounters. His stories and teachings are the reason I have become so passionate about nature connection practices. Delmar has taught me important skills to have as both a naturalist and wildlife photographer. He has taught me how to identify flora and fauna and track wildlife.”

We wanted to share in his own words more about the digital art of camera trapping, and why this volunteer led study is essential to conservation.

Do you feel digital nature photography can compel individuals to participate in protecting natural habitats?

I fully believe that photography can be an essential tool used for environmental conservation. Photographs reveal so much of the unseen world, they can help conservationists understand unseen wildlife behavior. The beautiful thing about photographs is that they can be shared and used to educate people on local wildlife populations that they may have never seen before.

What are some of the most memorable encounters or captures out in the field?

I have memories as a kid being out in the state park at blue hour. I remember laying on a sandstone boulder watching the first stars appear in the sky. The air was warm and the bats were zipping around catching the mosquitoes and moths. I was amazed by the occasional dusk chorus of poorwill . As the night grew darker the poorwill chorus faded and the distant chatter of coyotes sent chills down my back. All noise was quickly flooded out by the symphony of crickets.

What do you wish to convey in your work?

I love the idea that my images can build a bridge between the human and not human world. I hope that by seeing my images people can build stronger connections and learn about the local wildlife they share the Canyon with.

A local landscape photographer, Don Holtz, captures incredible images of Topanga. I also was able to be his apprentice and we taught a photography class. @donholtzphoto

I highly suggest a kid who lives in Southern California named Nicholas Hess. He mainly photographs reptiles and amphibians but likes to capture other animals when he gets the opportunity. Really exceptional work! @greatwhiterattlesnake

Growing up or living in Topanga we encounter a strong community bond. What advice would you share with Topangans during these challenging new times?

It’s important that we take this moment in time to develop a connection with the natural world. We are incredibly fortunate to live in the Santa Monica Mountains in a time like this. There are mountains, creeks, and sandstone caves to be explored, there are mammals, reptiles, and insects to be seen. We have the time to dive deep and educate ourselves about the wild place we call home.

By observing Topanga’s ecology we can begin to notice when the environment is impacted negatively. As bobcat and mountain lion populations dwindle we can see the direct impacts of highways, rat poison, and residential expansion. As we see the chaparral become bone dry and our reptile and amphibian populations suffer we can understand that we are experiencing a drought. The sooner we begin to notice the negative impacts we have on nature the sooner we can make a change in these new times.

* According to DigitalTrends.com a DSLR camera is a digital single-lens reflex camera. Inside the camera body is a mirror that reflects the light coming from the lens up into an optical viewfinder, by way of either a prism (in higher-end DSLRs) or a series of additional mirrors (usually in lower-end models). This is how you can see what you’re shooting, right through the lens, and is where the term “reflex” comes from — referring to a mirror’s reflection.

Fire Season is Here: What to Know