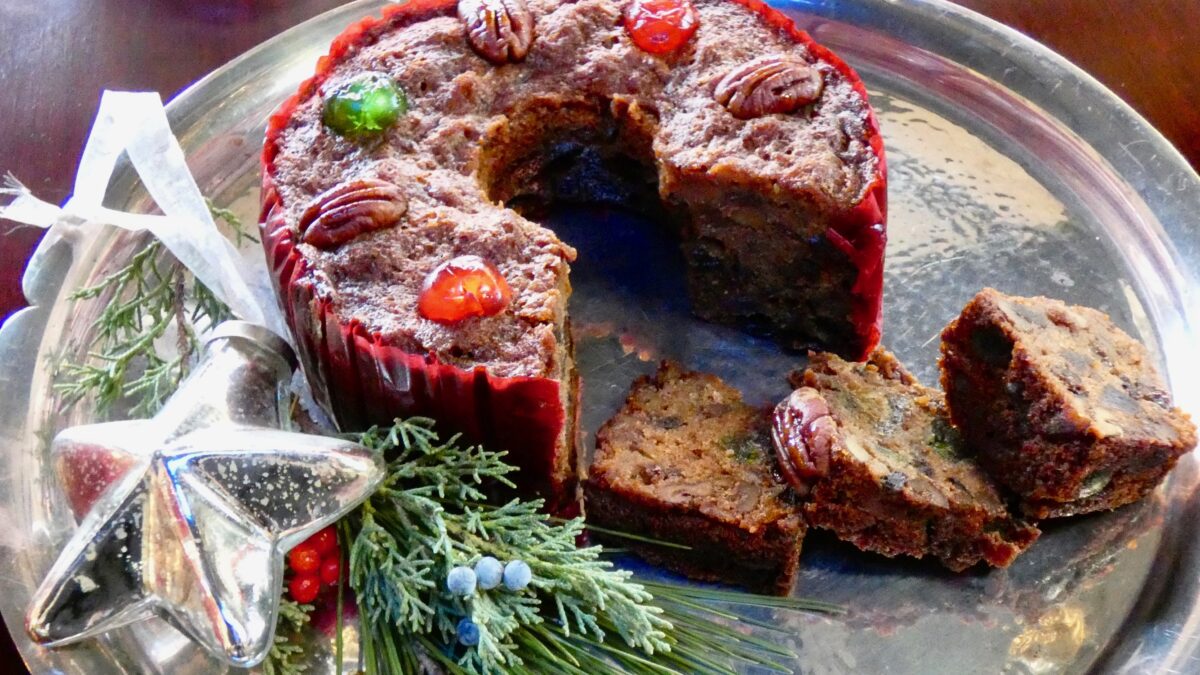 Assumption Abbey’s fruitcake is the author’s favorite. It’s a dark fruitcake that is heavier on the nuts than the fruit. Photos by Suzanne Guldimann
Discover

“It’s always the same: a morning arrives in November, and my friend, as though officially inaugurating the Christmas time of year that exhilarates her imagination and fuels the blaze of her heart, announces: “It’s fruitcake weather!

Fruitcake is almost as ancient as bread itself. Some of the ingredients haven’t changed in thousands of years—dates, raisins and figs would all have been available to the ancient Egyptians who left loaves of bread and dried fruit in the tombs of the dead to provide nourishment in the afterlife.

Fruitcake encompassed a large family of breads and cakes that include German Stollen, Irish Barmbrack; Italian Panettone, Eastern European Keks, and Spanish Bollo de higo. Cakes made with dried fruit were a winter tradition throughout Europe going all the way back to Roman times, when luxury goods like spices and dried figs were available throughout the empire.

The modern fruitcake evolved in the 18th century, when large quantities of refined sugar, spices, oranges, pineapples and other exotic fruit began arriving in Britain and throughout Europe from the far-flung corners of the world (there’s a thesis in there for someone about the relationship between Christmas fruitcakes and imperial colonialism).

By the 19th century, this kind of cake, iced with marzipan and royal icing, was not just for Christmas, it was the traditional wedding cake in Britain and the United States. The custom of saving some of the cake to celebrate the first anniversary and of sending a slice home with guests or to relatives or friends who could not be present at the festivities, originates with this sturdy, long-lasting cake and not with the fluffy white cake and buttercream preferred today.

Queen Victoria’s massive, 300-pound wedding cake, baked in 1840, was the quintessential British fruitcake, a culinary showcase of luxury ingredients from all over the British Empire. A slice of that cake in its original commemorative box sold for £1,500 at auction in 2016. Fruitcake’s longevity is not an exaggeration.

This kind of iced dark rich fruit cake has fallen out of favor for weddings but is still a Christmas tradition in Britain. However, somehow America became disenchanted with this storied dessert.

The artificially colored neon-bright candied fruit and corn syrup that began to fill cheap, mass-produced American fruitcakes in the post WWII years are often blamed for the declining popularity of this traditional dessert, but a deep dive into the California Digital Newspaper Collection reveals that the fruitcake’s descent into infamy is much more recent.

The newspaper record reveals that the fruitcake’s fall from favor was abrupt. The extinction event for this venerable dessert appears to have occurred in the mid 1980s, and the death blow appears to have been the combined wit and sarcasm of columnist Erma Bombeck and comedian Johnny Carson. Bombeck spent the early ’80s bashing fruitcake in her column and making fun of her mother’s devotion to the dessert. Carson had a running gag on the Tonight Show about how there is only one fruitcake and it is regifted over and over again.

As recently as 1984, headlines proclaimed the fruitcake an ideal gift, promoted new recipes, and advertised fruitcake fundraisers hosted by service organizations like the Kiwanis Club with a complete lack of sarcasm or snark. After 1985, fruitcakes are approached ironically or apologetically, with the inevitable disclaimer that the author knows many people do not care for them and a reference to Carson’s there-is-only-one-fruitcake schtick.

The fruitcake remains infamous but is no longer ubiquitous. However, for those who love it, there are still a number of great options.

For the kind of fruitcake with so much candied fruit in it that a slice resembles a stained glass window, try Claxton’s. For more than a hundred years, this Georgia-based bakery has made its popular loaf-shaped fruitcake encrusted with candied fruit and full of Georgia pecans. www.claxtonfruitcake.com

The Collin Street Bakery in Texas has been baking fruitcake since 1896. Their deluxe cake is flavored with honey and more heavy on pecans than candied fruit. Collinstreet.com

Frog Hollow Farms, in Northern California, makes an all-natural fruitcake with organic ingredients, including dried peaches and plums, and plenty of rum, and with absolutely no artificially colored fruit, corn syrup, or other questionable ingredients. It’s expensive but good. www.froghollow.com

Some of the best traditional fruitcakes available in the U.S. today are baked at monasteries—a return to the fruitcake’s medieval roots. There are four outstanding American monastery fruitcake makers, and all four abbeys rely on fruitcake sales to help raise funds for their programs:

The monks of the Abbey of Gethsemani in Kentucky add Kentucky bourbon and pecans for a traditional Southern fruitcake in the spirit (no pun intended) of the fruitcakes Truman Capote remembered making as a child with his cousin in his much-loved short story “A Christmas Memory”. www.gethsemanifarms.org

Assumption Abbey is a community of monks of the Cistercian Order in Ava, Missouri. The Assumption Abbey fruitcake is the author’s personal favorite. The ingredients include raisins, pineapple, cherries, lemon peel, orange peel, walnuts, and rum. www.trappistmonks.com

The 29 Benedictine monks of the New Camaldoli Hermitage in Big Sur had a close call with wildfire this year—the Dolan Fire burned practically to their doorstep, but it didn’t affect their cake baking operation. Their fruitcake features cherries, pineapples, California raisins, walnuts, dates, Georgia pecans, and brandy. They also make a classic date nut cake that is also flavored with brandy that has absolutely no neon-colored cherries or candied fruit. https://www.contemplation.com

Our Lady of Guadalupe Trappist Abbey is located in Oregon’s Willamette Valley. This is the only monastery bakery we know of that bakes a retro Hawaiian-style fruitcake, with a light cake base, papaya, mango, pineapple and macadamia nuts, flavored with spiced rum. They also bake a fruit-heavy traditional fruitcake and a candied-fruit-free ginger cake with dates and nuts, both flavored with brandy. www.trappistbakery.com

Love it or loathe it, fruitcake is a storied and varied holiday tradition, one worth revisiting. And if you’re not going to eat it, we will. The cake stops here.