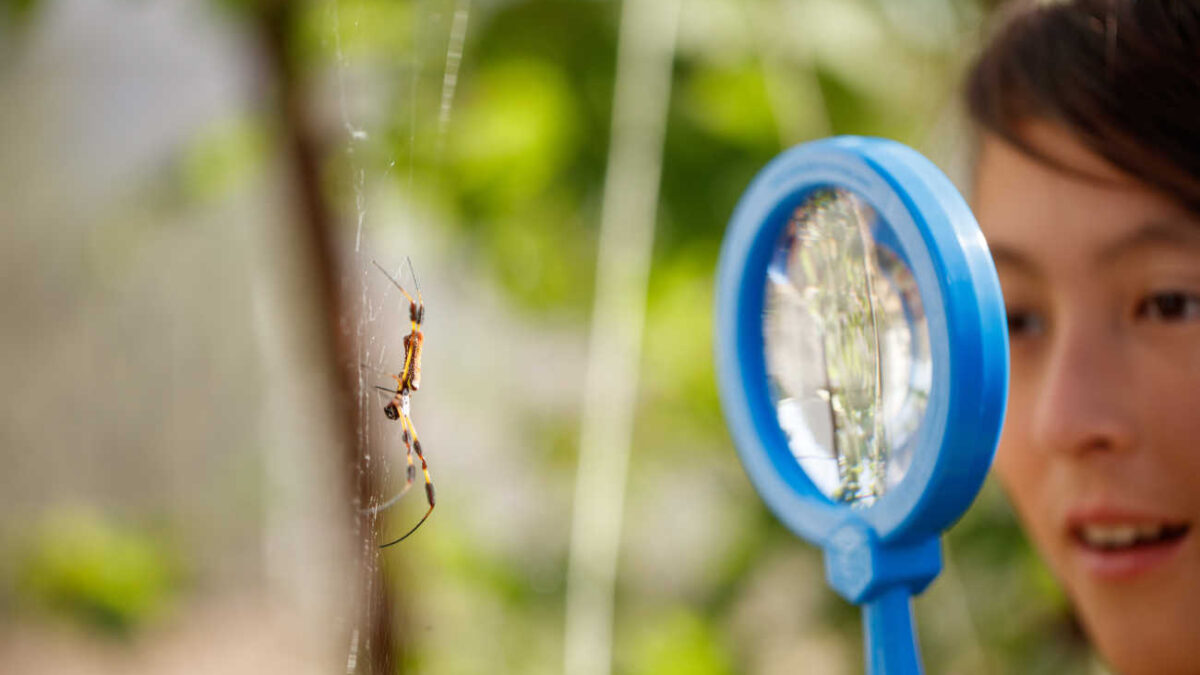 “What’s miraculous about a spider’s web?” said Mrs. Arable. “I don’t see why you say a web is a miracle—it’s just a web.”

“Ever try to spin one?” asked Dr. Dorian.

The webs appear everywhere in late summer, frail spirals of impossibly fine gossamer silk. Everywhere one goes, one risks walking face-first into a tough and sticky net, intended for very different prey. These are the beautiful and effective webs of the orb weavers, a family of spiders that are masters of the weaver’s art.

Orb weavers hatch in early spring, but they usually don’t make their presence felt until late summer, when they are big enough to spin conspicuously large webs. By the middle of autumn, the host of smaller spiders has mostly vanished, replaced by the season’s survivors. The largest orb weavers have bodies the size of a grape. They have grown large on a diet of winged insects. These giants wait for their dinner to arrive at the center of webs the size of tablecloths. They have the strength and tenacity to subdue butterflies, dragonflies, wasps and even the occasional ill-fated hummingbird.

Orb weavers are adaptable, highly successful, and can be found almost anywhere that there are flying insects to eat and vegetation or structures that will support a web. They aren’t fussy: trees, shrubs, grass, fence posts, the space between your parked car and the nearest vegetation are all potential anchorage points for a web.

The silk, or spidroin, is produced by special glands in the spider’s abdomen (Spiderman really can’t do everything a spider does). Orb weavers produce multiple types of silk, including the draglines cast to anchor and create the “spokes” of their webs; the sticky glue that entangles prey; the tough material used to wrap it up once it’s caught; and special silks for weaving egg cases.

Orb weaver silk really is stronger than steel and tougher than kevlar—that’s not just a myth. Every strand is made from many nano-fibers of silk protein—a miniature, biological version of the kind of flexible steel cables humans make to support bridges.

Each spiral web begins with a single strand of silk, a dragline. The spider lets the wind or air currents carry it to an anchor point. It can then begin building the web, adding the spokes, then working inward towards the center of the spiral.

Research has recently revealed that the silk of spider species like orb weavers can dissipate energy, preventing the spider from spinning out of control when suspended from a single line, and enabling it to perform astonishing feats on the high wire. A 2017 study published by the American Institute of Physics suggests that biometric fibers that mimic this quality could eventually lead to better helicopter rescue ropes, parachute cords and even violin strings.

Artificial spider silk also has potential for medical uses that range from sutures to wound healing, including diabetic ulcers, burn injuries and other deep wounds, and potentially even the manufacture of artificial tendons.

New research indicates that orb weavers can use their webs like an antenna to amplify and collect sounds. Research published earlier this year in the Proceedings of the National Academy of Sciences, offers evidence that orb weavers use the strands of their web to detect the “nano-scale” movement of air particles as they are agitated by sound waves, greatly enhancing the spider’s ability to hear, which it does through organs in its feet.

The big spider in the center of that web in the garden or patio is probably the same spider you’ve watched grow large all season, and the child of the previous season’s backyard spider, and it is probably a female. Female orb are the big web weavers, and tend to remain in the same area throughout their life. Some species mend their webs as needed, others remake their web each night.

Males are less concerned with web weaver than females. Once they reach maturity they devote their energies to finding a mate, and usually die once they have achieved their goal. Females have slightly longer lives. After mating, they weave a special sac to protect their eggs. Once the eggs are laid and the sac is secure, they also die, leaving the next generation to hatch on their own in the spring, and disperse on the wind to start the cycle over again.

Walking into a web may not be much fun, but orb weavers play a critically important role in the ecology of the Santa Monica Mountains. They are apex predators that consume insects that humans regard as pests, and are themselves an important source of food for birds and other wildlife. Orb webs can be inconvenient, especially when they are woven outside the front door or across the driveway, but peaceful coexistence is possible. It takes a spider a long time and a lot of resources to build a web, time away from the important task of catching and consuming insects like mosquitoes and flies. Avoiding webs when possible, instead of removing them is the most merciful approach. When that isn’t possible, removing the web but sparing the spider is the next best option. Like E.B. White’s fictional Charlotte, these are complex creatures. They may be difficult to love, but they deserve respect and compassion.

All of the local orb weaver species are mild-mannered arachnids. They can reportedly bite if threatened but they do not have venom that is dangerous to humans or pets, and they prefer to simply avoid humans.

Some of the largest common orb weavers in the Santa Monica Mountains include Argiope aurantia, the golden, or yellow garden spider; Araneus gemma, the gem-shaped orb weaver, also known as a cat-faced spider; and Neoscona crucifera, the almost impossibly large spotted orb weaver.

Most residents of the Santa Monica Mountains need look no farther than their own backyard to find orb weavers at work, but for a truly extraordinary spider experience, check out the Natural History Museum of Los Angeles County’s Spider Pavilion. This Halloween season exhibit is a favorite with families. It features an open air pavilion that is home to hundreds of orb weavers, and a special spider exhibit with dozens of live spider species, from jumping spiders to tarantulas. The NHM Spider Pavilion is open through November 27 at the Natural History Museum of Los Angeles County, 900 Exposition Blvd., Los Angeles. Free for Members. Tickets required for the general public. Visit NHM.ORG