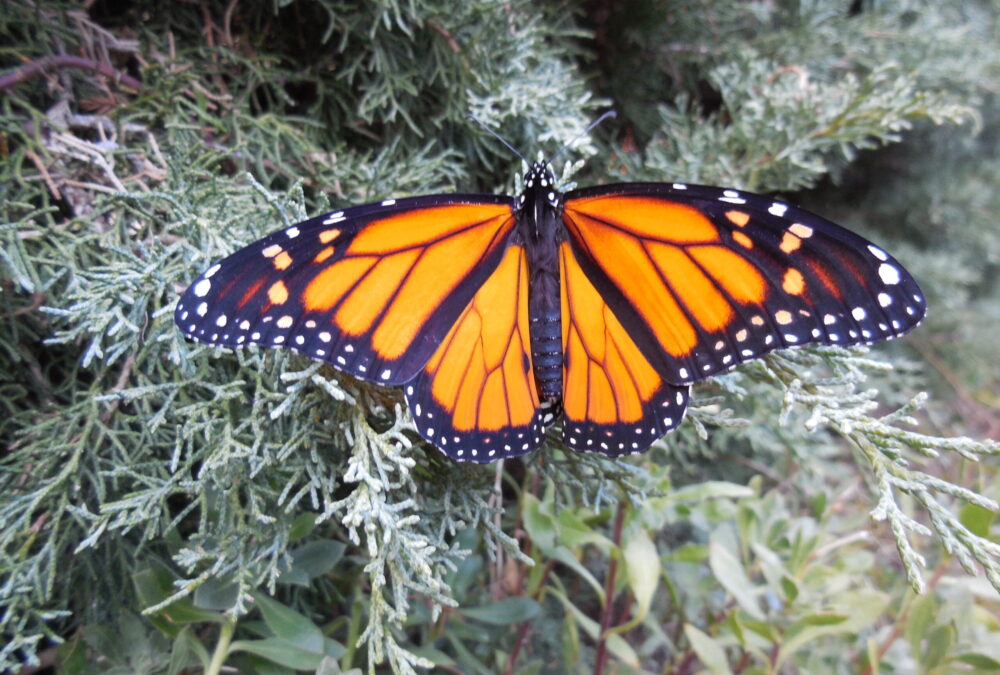 There was a time not long ago when millions of Western monarch butterflies filled the sky in autumn, migrating south for winter along the California Coast. It takes multiple generations of these remarkable butterflies to make the round trip journey. The butterflies that migrate north in the spring transmit the knowledge to their offspring, which will make the return journey and arrive at the ancient overwintering sites. Even though they have never been there before, each butterfly knows the way.

While Pacific Grove in Monterey County and Natural Arches State Park in Santa Cruz County are world famous for their tree groves filled with overwintering monarchs, the colorful migrants also once flocked to the Santa Monica Mountains.

Zuma Canyon in Malibu was a traditional overwintering destination, and so was Santa Ynez Canyon on the eastern side of Topanga State Park. But colonies of butterflies also returned year after year to trees in people’s gardens or along the roads, where the olive green leaves of the old eucalyptus trees, planted as windbreaks in the early twentieth century, would be covered with the illusion of autumn gold from a million butterfly wings. An estimated 4.5 million monarchs overwintered in California in the 1980s. By the mid-2010s, the population had declined by 97 percent.

Richard Rachman is a plant ecologist and the western monarch count coordinator for Los Angeles County. He’s gearing up for the annual Thanksgiving Monarch Butterfly Count, sponsored by the Xerces Society.

“We have around 27 historical monarch overwintering sites we monitor with the help of community scientists, and we are in need of more volunteers,” he told the Topanga New Times.

“2020-2021 was a fairly dim year for monarchs, as we observed less than 2000 overwintering monarchs in the whole state,” Bachman said. “This is due to a variety of issues, particularly loss of habitat and their larval food source, milkweed, but also due to pesticides, and parasites. The next year, we counted over 250,000 monarchs in the whole state during the Thanksgiving count. That number did drop down to 150,000 during the New Year’s count, but these are still high numbers. We are hoping with this year’s Thanksgiving and New Year’s count we also capture better numbers, but this only shows how important monitoring is.”

Bachman encourages everyone to sign up and participate in the count. “Becoming a community scientist is really easy. You sign up to volunteer on this website and adopt a site close to you.”

The only requirement for participating? A willingness to get up early.

“Volunteers go out at sunrise, while temperatures are low enough for monarchs to display their clustering behavior—around 55 F,” Bachman explained. “The butterflies look like Dorritos hanging out on the branches and can be kind of hard to spot in low light. We use binoculars and cell phones to record data. This information is then used by scientists to understand monarch butterflies better and hopefully influence policy to manage their habitat and protect them.”

Bachman will be helping train volunteers in person at workshops offered in collaboration with Theodore Payne theodorepayne.org/. For volunteers who can’t attend in person, there are training videos and more information on the website:

To learn more about how to volunteer for the monitoring program, visit https://westernmonarchcount.org/volunteer

Bachman invites anyone who is interested to reach out to him directly at richard.rachman.872@my.csun.edu, or on Instagram and iNaturalist @a_wandering_ecologist