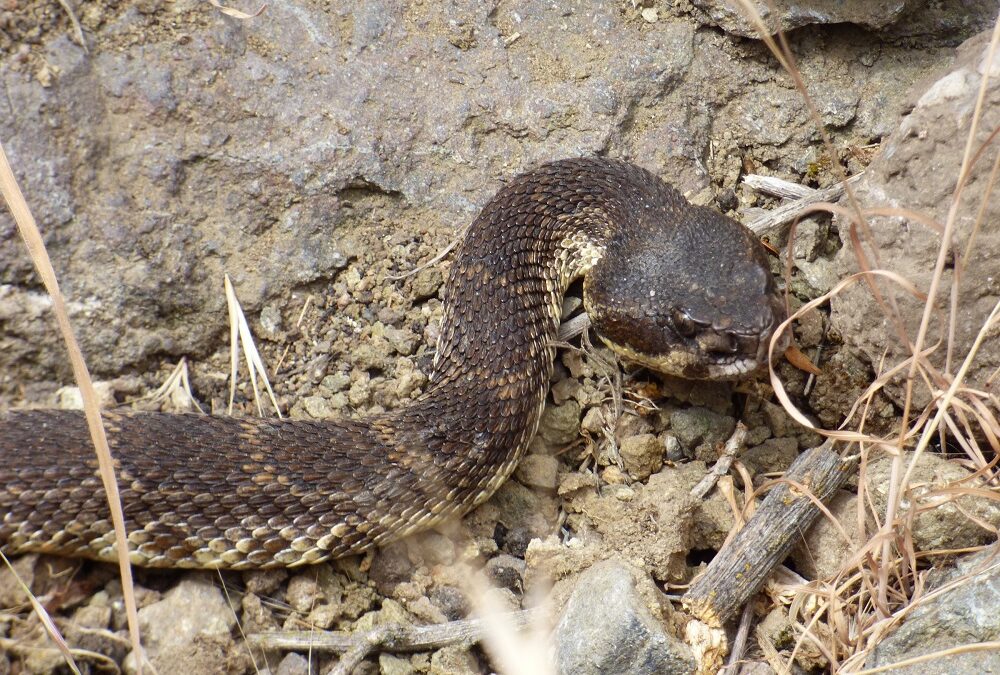 If you are close enough to see the vertical pupil in the rattlesnake’s eye, you are probably too close. That diamond-shaped head is equipped with fangs that contain a powerful neurotoxin, but the resident species of rattlesnake, while potentially dangerous, is rarely aggressive. Photo by Suzanne Guldimann
Discover

It’s snake weather in Topanga! Most reptile species in the Santa Monica Mountains don’t hibernate, they brumate—becoming inactive during cold weather and active during warm weather. On summer days when there is a heavy marine layer, snakes may only be out during the warmest part of the afternoon, but during hot weather, when the ground retains heat, they can remain active late into the night. That can be a problem for their human neighbors, and never more so than when so many of us are spending more time outdoors on decks and in our gardens.

There are 14 native species of snake in the Santa Monica Mountains but only three or four are commonly seen, and only one has venom that is hazardous to humans and pets: the Southern Pacific Rattlesnake (Crotalus viridis).

Rattlesnake bites usually involve accidentally stepping on or disturbing a snake while reaching into brush, rocks or a woodpile, or during an attempt to handle or move a snake. Dogs, cats and horses are also at risk from rattlesnake bites. Not all bites result in venom being injected into the wound, but a rattlesnake bite is a serious medical emergency that requires immediate professional treatment.

Staying on trails and away from deep brush, grass or rocks is the best way to avoid encounters with rattlesnakes. It’s a good idea to regularly check tempting hiding places like patio furniture and children’s play equipment. Rattlesnakes are also attracted to concrete or brick driveways that hold the heat of the sun. They have been known to make their way into Topanga homes through open doors or even pet flaps. Make sure doors are shut at night and that screens fit well and don’t have gaps or holes.

Rattlesnakes don’t always rattle and it can be difficult to tell at first glance what kind of snake one is dealing with. It’s a good idea to treat all snakes with respect and give them plenty of room. It’s also helpful to know how to tell a rattlesnake from its closest look-alike, the harmless and benign gopher snake (Pituophis catenifer).

Rattlesnakes can be vividly patterned with black and yellow diamonds or an almost uniform dull charcoal color, but they all have large scales and a big triangular head—the glands that produce the venom are responsible for the shape. The rattlesnake’s eyes have a vertical pupil, but it may be hard to see, since the eyes can appear dark. Adult rattlesnakes are chunky, tapering dramatically at both ends.

Gopher snakes are never chunky, even when they grow large. They have smaller scales in a more muted pattern and they taper to a long skinny tail. Unlike rattlesnakes, this species has a small head with round pupils. Black patches under each eye create the illusion that this species has the rattler’s distinctive vertical pupil, but that is just a disguise, as is this snake’s ability to flatten its head and shake its tail in an effort to fool potential predators.

The two-striped garter snake (Thamnophis hammondii)  is another frequent backyard resident, together with the California striped racer (Coluber lateralis lateralis). They might surprise an unsuspecting human, but these slender and speedy snakes are harmless to humans and neither one resembles a rattlesnake.

There are several snake species that are almost never seen, even though they are common backyard species that live alongside their human neighbors.

You have to look harder to find the shy and retiring ringneck snake, a small constrictor that lives a quiet life under stones and in woodpiles, where it hunts for beetles and slugs, and the worm-like western blindsnake, or threadsnake (Rena humilis), which spends most of its life in the soil, where it hunts ants.

Most of us coexist peacefully and often unknowingly with our snake neighbors, and unless it’s a rattlesnake in the wrong place, their presence is another amazing aspect of life in the canyon and not an issue, but it is good to be aware of their presence, especially in early summer when encounters are more common.

People who live in snake hotspots might consider buying a snake pole—a sort of shepherd’s crook for safely picking up snakes. There are also a number of local snake wranglers who will remove rattlers and safely relocate them away from human habitation for a fee.

Snakes are critically important for keeping a healthy ecological balance. They are also beautiful and amazing—from a safe distance!

Need to relocate a rattlesnake? Try professional snake wrangler Bo Slyapitch, rattlesnakewrangler.com Or check out our collection of other snake wranglers in and around the Topanga area in our Resource section

Have you encountered a snake in your garden or on the trail this spring? Send us a photo: hello@topanganewtimes.com

Musical Community Show is a Hit with the Community and with the Musicians!