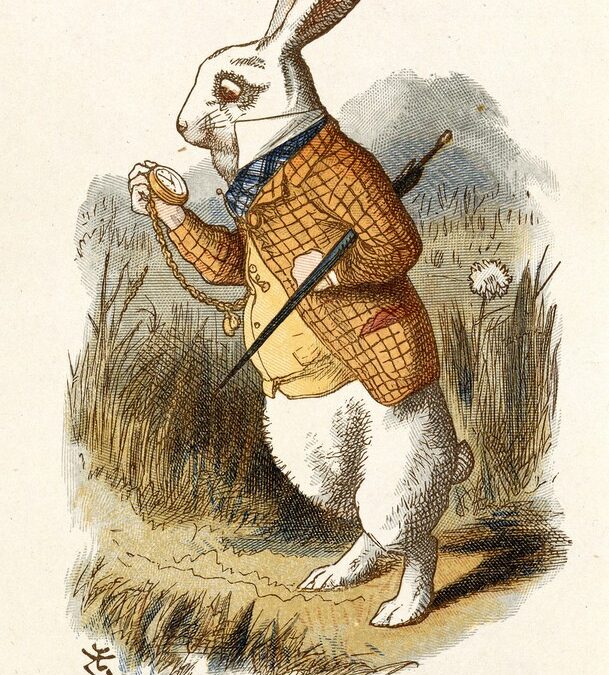 The White Rabbit, by John Tenniel
Books & Such

One of my earliest experiences with the internet was a demonstration made by a colleague named Archie, who giggled like a child as he watched a blurry image emerge from his printer; of a woman sunbathing without her top.

I don’t really want to imagine what the internet did FOR Archie. More importantly, a recent New York Times-sponsored podcast called Rabbit Hole explores what the internet has done TO all of us. While it is easy to cast judgments upon that seamier part of the internet that piqued Archie’s curiosity, more disturbing is Rabbit Hole’s endeavor to uncover the political pornography of the “alt-right.”

In a study conducted by Columbia Journalism Review in cooperation with Harvard University, researchers discovered the alt-right universe to be populated by “a network of mutually-reinforcing hyper-partisan sites… combining decontextualized truths, repeated falsehoods, and leaps of logic to create a fundamentally misleading view of the world.”*

A young man named Caleb and his YouTube history of 12,000 videos viewed in five years is featured in Rabbit Hole. His road map for this malicious and profane journey down the alt-right rabbit hole is the algorithms invented by YouTube to achieve a singular goal: increase video “watch time”— aka $$$$. Early on, the algorithm encouraged “more of the same.” More cat videos, more self-help videos, etc… As the algorithm evolved, however, it began to accurately suggest altogether new content that might increase watch time.

One of Caleb’s first steps—a treacherously dangerous one when near a rabbit hole —was viewing a video by InfoWars host Alex Jones who claimed that the December 2012 Sandy Hook Elementary School Massacre—26 dead, 20 of them six and seven years old—was a manufactured hoax with actors pretending to be involved in a murderous rampage. By the time the algorithm took hold of him, Caleb was watching hours of similar politically explosive garbage every day: the “soundtrack” of his life, he called it.

Early YouTube content went primarily unchecked as many YouTubers—some of them becoming extremely wealthy in the process—operated on an unregulated platform delivering untethered and largely unchallenged arguments against immigration, gays, and feminists; where rants against radical Islam—and therefore, Muslims, in general—are situated as a threat to American sovereignty; where unfounded proclamations of racial hierarchy and IQ resemble those of the eugenics theories that underscored Nazi Germany’s worst instincts; and where the slaughter of children can be twisted into a leftist conspiracy to confiscate guns.

And, as much as many of these alt-right sites would like to imagine a countervailing “alt-left,” there is no equivalent set of forces on that side. This is not to say that far left ideologies are not out there, but that they—socialists, communists, Marxists, whoever—typically underscore their beliefs with facts and their interpretations can be subjected to argument.

This is just not true of someone who claims that the Sandy Hook Massacre didn’t happen, or that Hillary Clinton runs a global pedophile ring, or that there exists such a thing as “The Great Replacement,” an effort to undermine Western (white) civilization.

I certainly come at all this from the left; and so do the New York Times and most mainstream outlets, for that matter. The truth is that journalists as a whole tend to be tolerant of divergent views, sympathetic to oppressed groups, and willing to see that many individual problems are the result of societal problems; and society, largely through our government, should do something about it.

This left-of-center reality in journalism—and in academia, as well—is just the sort of verifiable fact the alt-right sinks their teeth into; that small kernel of truth upon which is constructed the narrative of a wholly corrupted mainstream media in lockstep with elite leftist powers bent upon ruling the world; facilitated by similarly corrupted battalions of college professors deployed across the country to brainwash young people.

In another episode of Rabbit Hole, the CEO of YouTube explains how the platform’s video-suggestion algorithm evolved into a beast of political division; although she doesn’t quite describe it that way. And, only recently, she confesses, YouTube and other social media platforms have begun to address the internet’s toleration of hate speech, misinformation, and the promulgation of outrageous conspiracy theories. As a result, many of the alt-right’s most famous celebrities have been banned from these sites.

Indeed, Facebook only recently announced the removal of 790 QAnon groups from its site. QAnon is perhaps the grandest of all right wing conspiracies and is the focus of episodes seven and eight.

Despite cries of censorship from these banned forums, the First Amendment does not protect as “free speech” the cry of “fire” in a crowded movie theater and many have argued that the alt-right is doing just that. However, attempting to stifle this kind of ugly speech only fertilizes their toxic soil.

Instead, ugly speech should be countered with thoughtful speech: The alt-right is not only the enemy of liberalism, it is also an affront to conservatism; because the alt-right is not really participating in the conversation, they are blowing it up. Most disheartening is that traditional conservatives, at one time, appeared to support an older sense of family values, fiscal responsibility, a focus on individualism, and a healthy and deserved skepticism regarding the utility of large government. Unfortunately, in the Age of Trump, the voice of rational conservatism has been lost in the din of Twitter tirades emanating from Pennsylvania Avenue.

In short, the alt-right abuses social media, disseminates pseudo-science, completely fails to back up conspiracies with evidence, and eerily resembles previous waves of fascism that have taken hold among the vulnerable masses. To me, the real problem is not the purveyors of twisted ideology but that we live in a society with so many willing to buy it, so many willing to happily and confidently float down the rabbit hole, all the while turning hot air into ideology.

Two Local Educators on the Digitization of Learning Environments

Some Friends of Mine

Three Takes on the 19th Century