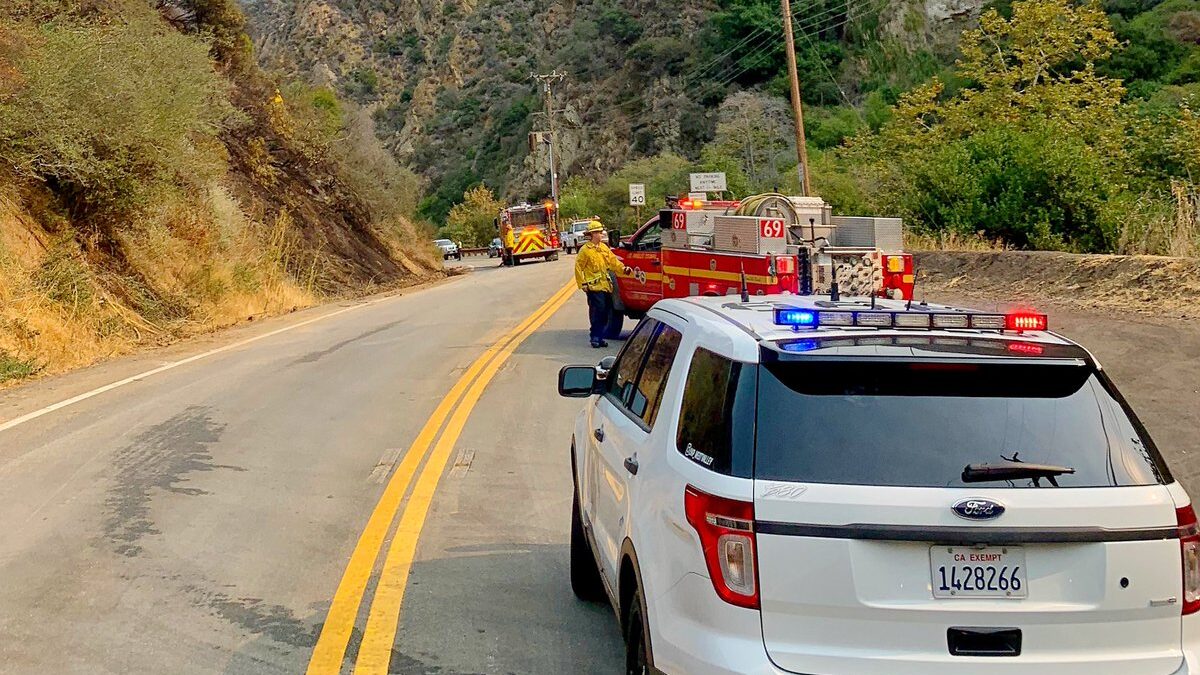 September 8 was almost the day that Topanga burned. The community had a close call, when a reckless driver involved in a police pursuit reportedly started multiple fires when his trailer, which lost the wheels on one side, generated what has been described as a “rooster’s tail” of sparks.

Numerous witnesses watched in horror or struggled to get out of the way as the driver, pursued by law enforcement, fishtailed down the canyon trailing sparks, side-swiping parked cars, striking fences, trees, and even the canyon wall.

Anabel Simer was one of a number of residents who rushed to extinguish sparks. She was walking her dog when she saw flames by the side of the road. She stomped the fire out with the help  of passersby, and called 911.

As the pursuit continued, small fires were randomly sparked and physically stomped out by other Topangans and drivers in the vicinity. Near the S-curves, the sparks broke unhindered into flames that climbed the canyon wall.

The pursuit hampered emergency response from the Pacific Coast Highway side of the canyon, and a rock fall caused by a previous fire reportedly further complicated access to the lower canyon, but it didn’t interfere with helicopter crews, who drew water from 69 Bravo to combat the one major blaze.

Initial estimates indicated that the fire had the potential to rapidly spread to 200 acres in deep brush, but the water-dropping helicopters and Los Angeles County’s massive fixed-wing Quebec fire-fighting planes held the blaze at around 10 acres.

Ground crews worked through the night putting out hotspots and securing the perimeter. The forecast called for Santa Ana winds, making the mop-up process even more critically important than usual.

The suspect was taken into custody after a tense stand-off on Pacific Coast Highway at Carbon Beach. Pacific Coast Highway was closed in both directions during the extended confrontation. Topanga Canyon Blvd. remained closed all night. The boulevard has reopened, but travelers can expect occasional delays on Wednesday, as crews continue to work.

This time, against all the odds, Topanga escaped almost unscathed. Next time, we may not be as fortunate. The incident is a good reminder for all Canyon residents to review emergency plans, especially in a year when an estimated  two million acres have already burned throughout the state. Check out our updated list of Fire Resources in the Resources menu drop-down list. TCEP—Topanga Coalition for Emergency Preparedness—can help, particularly for emergency status updates that include up-to-the-minute information on local emergencies, like the September 8 fire.

On Sunday, September 13, at 8 p.m., TCEP will test its new, more capable, Top-of-the-Hour (TOTH) report transmitter on FRS radio channel 15. Topanga residents are encouraged to take part in the test.