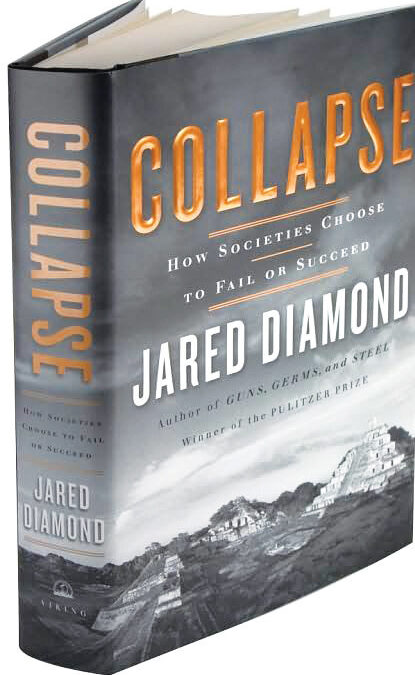 By the time Jared Diamond published Collapse in 2005, he was ranked as one of the leading public intellectuals in the world; which is my way of saying that this is not the type of book one carries in a beach bag.

As the second in a trilogy, Collapse follows Guns, Germs, and Steel (1997), which asked, among other things, why it is that Native Americans didn’t sail to Europe and conquer that continent, instead of the other way around. In turn, Collapse asks, among other things, whether investigating the collapse of once-powerful and thriving societies can help us avoid one of our own (in case you didn’t notice, Diamond asks big questions).

This is a book about how societies manage their environment, yet Jared Diamond is no tree-hugger; he’s not blind either. He begins Collapse by describing the damage human activity has done—in an example he has witnessed himself—to southwestern Montana, a landscape dramatically altered by a long history of mining, logging, and agriculture. Interestingly, Diamond does not blame the huge mining interests or the logging companies that used clear cut practices to denude the landscape. Instead, he lays the blame directly at the feet of the electorate, collectively allowing the degradation of their environment (if you hear a little bell going off, you’re not alone).

Diamond provides repeated examples of long-gone societies collectively doing the same thing; with varying degrees of awareness of the impact of their actions. Proving the maxim that much can be learned from failure, Diamond focuses on the Anasazi who once flourished in what is now the southwest US; the Maya, whose empire spanned parts of modern Mexico; the sea-faring Vikings of Scandinavia who, for a time, established settlements in Iceland, Greenland, and the coast of North America; two related societies in the islands of the South Pacific that faded, one due to isolation, and the other to interdependence; and several more recent instances of societal breakdown in Rwanda, Haiti, and more.

Diamond applies equal measures of hard science and educated speculation to document the decline of these societies. Indeed, much of the detail in the book evaluates the archaeological record in terms of natural climate change through dendrochronology, dietary habits through midden analysis, changes in flora through palynology, and the passage of time through glottochronology—tree rings, garbage/waste dumps, pollen footprints, and relative changes in language among related peoples, respectively (vocabulary quiz in the morning).

Despite the clear message of despair implied by the title, many of Diamond’s examples of collapse did not follow a cataclysmic event but, rather, a long series of decisions that favored short-term gains over long-term sustainability: Hence, the book’s subtitle: How Societies Choose to Fail or Succeed.

To make his point, Diamond contrasts the fates of the Vikings and the Inuit who occupied the harsh environment of Greenland at roughly the same time. In the example offered by the Vikings—and certainly relevant to us—cultural dispositions contributed to their failure. They dedicated resources to honor political and religious elites when resources were in short supply. And their clearly racist attitudes toward the Inuit blinded them to readily apparent methods of acquiring food and shelter without degrading the fragile environment. In short, the Vikings failed because they chose to.

To make wise decisions, then, Diamond offers a framework to evaluate collapsed societies: understanding the resilience or fragility of an environment, adapting to natural changes related to hot/cold and wet/dry cycles, dealing with potentially hostile neighbors, and dependence upon trading partners.

With these four sets of factors, we see an important emphasis on the relationship between human societies and their environment. For instance, dependence on trading partners makes a society dependent on the partner’s ability to deal with changes in their own environment. Or, having a fruitful trading relationship can enhance a society’s prospects for success. Remarkably, there is little evidence that the Vikings engaged in trade with the environmentally successful Inuit. Also, an environmentally weakened society may also become vulnerable to hostile neighbors—the Inuit?—who may not have been a serious threat before the weakening.

Of course, like any good historian, geographer, or anthropologist—and Diamond is all three—the point of all this is to make sense of our own world. Unfortunately for us (as humans, not Americans), Diamond sees the collapse of Easter Island society—which existed from about A.D. 900 to 1700—as the most prescient lesson; isolated in the Pacific Ocean as we are now isolated in space.

To Diamond, modern globalization has made us, in effect, a single society of 7 billion and growing, scrambling for dwindling resources, and stubbornly refusing to change our ways. In the case of Easter Island, they cut down all their trees; in our case, we are extracting resources at an unsustainable rate, polluting the air and water, and altering the climate. Yet, out of the grim news, there is hope; Easter Islanders could have behaved differently and now, according to Jared Diamond, so can we.

The key to Collapse, then, arises from his fifth set of factors: the variability of a society’s response to environmental challenges. In the end, Diamond argues that the essential element to survival is cooperation among members of a society who have a vested interest in maintaining the environment in the long-run. That, my dear friends, is a whole lotta work.

At one time, it seemed as if the United States was poised to lead the planet down a healthier and more sustainable environmental path. Unfortunately, our current political system falls woefully short of that ideal. Indeed, Diamond cites a 90-day frame of reference within our nation’s capital where political decisions are made in deference to an American attention span blinkered by scrolling Facebook posts and tribal instinct.

In the end, Diamond calls himself a “cautious optimist,” primarily because we have what these collapsed societies lacked: we know what happened to them, and now, thanks in part to Jared Diamond, we have begun to understand why. Of course, that was 2005. His latest book, the third in this trilogy, is titled Upheaval: Turning Points for Nations in Crisis (2019). Someday, I’ll try to muster up the courage to read it.