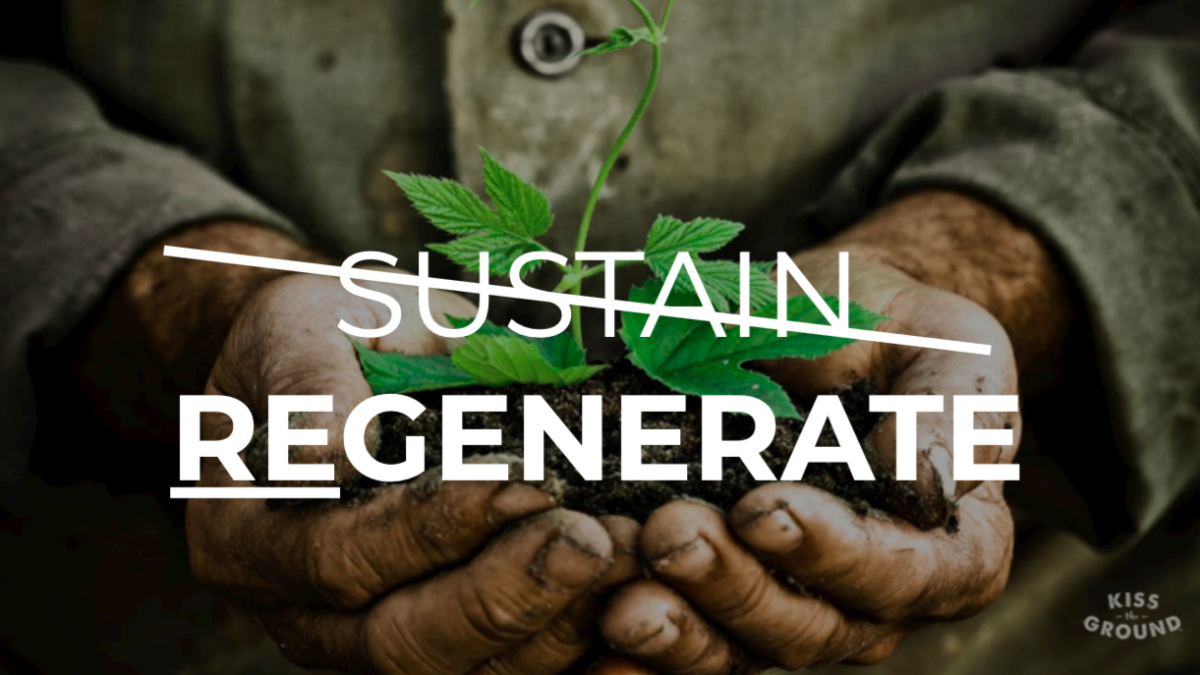 Kiss the Ground is an organization dedicated to restoring and maintaining healthy soil and soil microbes. It is now also a documentary, narrated by and featuring Woody Harrelson, that reveals a viable solution to our climate crisis: regenerating our soil.

I worked on the documentary Island Earth (2016), directed by Cyrus Sutton, a film that  explored indigenous agricultural systems and GMO’s. It made one thing quite clear: fostering an intimate connection with our surroundings and with the living organisms that lie beneath — our soil, is the most important step in solving our climate crisis.

I first came across Kiss the Ground—a learning community, book, and now documentary film—through cross pollinating with our film Island Earth, in Venice, California. Seven years ago, KTG founders Ryan Engelhart and Finian Makepeace were inspired by a lecture in New Zealand led by soil expert Graeme Sait. They collaboratively began the framework for the KTG organization. I interviewed KTG’s co-founder, policy director and lead educator Finian Makepeace, to get our conversation on regenerative agriculture and soil regeneration started:

TNT: Kiss the Ground documentary (stream premieres on Netflix, September 22) addresses our climate crisis. What does it mean to propose that the solution is right under our feet?

FM: When we look at the crises (healthy food access, flooding, drought, fire, human health, water security, land fertility, farmers going in debt) there is a serious amount of these issues that can be resolved or helped by regenerating soil. Soil is the basis for all life on land. The good news is, the carbon in our atmosphere that is current causing issues is the very substance we need to rebuild functioning soil. So, the solution is under our feet. Through the adoption of regenerative agriculture land can be restored, it can become fertile again, water sources can be replenished, biodiversity increased, farmer prosperity increased, more healthy nutrient rich food grown, and carbon can be sequestered.

TNT: In the Santa Monica Mountains we are a WUI; a wildland-urban interface, particularly vulnerable during storms and fire seasons. How does the health of our soil in our own backyard and where our food is grown impact the health of our seas?

FM: Erosion is a serious issue. Degraded soil that has been tilled, overgrazed, or left bare is fragile. That means when it rains or when strong wind blows, it washes or blows off the land. We lose an average of four tons of topsoil per acre per year on our agriculture land in the US. What this means for the oceans is terrible. Not only does it mean silting and sediment pollution, but even more it means our healthy water systems break down. Nitrogen and phosphorus, two of the most widely used fertilizers, cause havoc on the ocean system. What happens when those fertilizers erode the land when it rains is that they flow to the ocean where they create large algal blooms. When these blooms go through their decomposition process they suck so much oxygen out of the water that fish and other sea creatures literally suffocate. Yes, those dead zones in the ocean that have grown so big in the Gulf of Mexico for example, are caused by fertilizer runoff because we have broken and degraded soils on our farm land. Regenerative agriculture means less chemical inputs and far less runoff (in many cases zero runoff).

TNT: The KTG documentary connects the dots between carbon sequestration and extreme weather. What for you are some of the most striking details of the NASA and NOAA footage from the film?

FM: For me, the most striking images aren’t of the CO2 itself, but rather the extent of how much land in the world humans have turned into desert. Desertified bare ground radiates heat and perpetuates drought. We are currently making 30 million acres of farmable land unusable due to soil degradation every year (that is nearly the size of England per year). In the last 40 years one third of our farmable land has been lost. 75% of land in the world is deemed degraded. Humans caused this. The good news is, through regenerative farming and grazing we can work with nature to regenerate it.

For more information & financial support to participate in KTG’s Farmer Transition Program, or attend a soil health training, individuals who identify as African American, Native American, Indigenous, Latinx/ Hispanic, Asian Pacific Islanders, LGBTQIA+, low income, and/ or women farmers qualify for the Diversity and Inclusion Scholarship and should write farmland@kisstheground.com There are a limited number of scholarships available funded by donations, grants, farm to table collaborations.