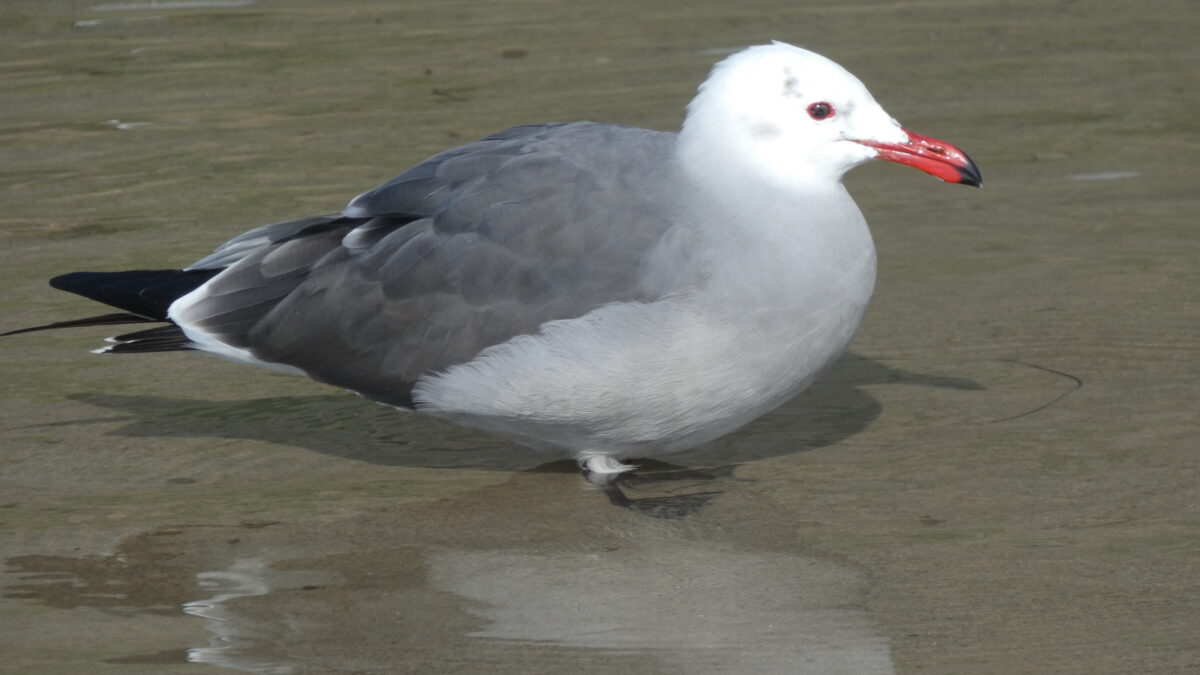 Heermann’s gull is an endemic species only found on the California and Northern Mexican coast—this species nests and breeds on the Isla Rasa in the Gulf of California and isn't a long distance traveler. It’s estimated that there are only around 300,000 of these beautiful sea birds, but their population has recovered somewhat from the impact of DDT in the mid 20th century.
Discover

September is Coastal Cleanup Month, and as anyone who has ever participated in a cleanup event knows, fascinating things wash up on the local coastline among the bits of kelp, shards of glass and plastic and broken shells that are the usual detritus on the shore. Mermaid’s purses—the leathery egg cases of skates and small sharks are an amazing thing to find, so are drift seeds—plant seed pods that are long-distance travelers turning up on the beach after southern swell events and winter storms.

A colorful array of common finds include blue mussel shells, purple urchin spines, turquoise chiton shell segments, and coral-colored colonies of bryozoans that coating rocks and even attached to the kelp. One of the strangest things to wash up locally are oarfish, a sea-serpent-like fish from tropical waters. This ocean giant can grow to be 20 feet long, but only turns up once or twice a century, and usually its appearance is connected to El Niño weather conditions. Less pleasant discoveries include dead birds, fish, and marine mammals. A 40-foot-long juvenile fin whale, killed by a boat strike, caused a stink—literally and figuratively—when it washed up on the beach in Malibu in 2012. That tragic death led to calls for slowing speeds in the shipping lanes offshore.

When the tide and the wind align sometimes small transparent shells that resemble glass ornaments wash up the sand along local beaches. Easily mistaken for jellyfish or shards of glass at first glance, these delicate shells are made by several species of pteropod—planktonic sea slugs—known as sea butterflies.

There is another small glass-like animal that occasionally appears in large numbers: Velella velella. These raft-like colonies of hydrozoas have no means of self-propulsion and can only go where the currents and winds drive them. This explains their common name: by-the-wind sailor, and their Latin name, which is derived from the word vela, a ship’s sail.

Velella lives its entire life on the surface of the water and appears to be a popular food item for some species of fish. According to a Monterey Bay Aquarium factsheet, “The angle of the sail may determine where they land. Those whose sails angle to the left are blown to our coast, while right-angled ones sail toward Japan.”

Although this year’s coastal clean up is a solo event, here’s a good chance you won’t be walking alone. This time of year, a host of birds make the beach their home, running ahead of human visitors, racing the tide in the hunt for kelp flies and sand crabs.

Look for a variety of seabirds: California brown pelicans; Western, California, glaucous, ring-billed, and Heermann’s gulls; royal and elegant terns. There are also an abundance of shorebirds this time of year: marbled godwits—their long bills turn slightly upward; long-billed curlews—largest of all the shorebirds, with a huge curved bill and a sorrowful call; whimbrels, the curlew’s little cousin; and willets—smaller, grayer, and shorter-beaked. These larger birds are joined by sandpipers, turnstones, tattlers, plovers, and sanderlings.

The beach is a busy place in the fall and winter, once the summer crowds of humans have gone. That there is still room for such a spectacular variety of birds on popular local beaches and habitat to support them is one of the things that make this stretch of coast so special and so worth visiting and protecting.