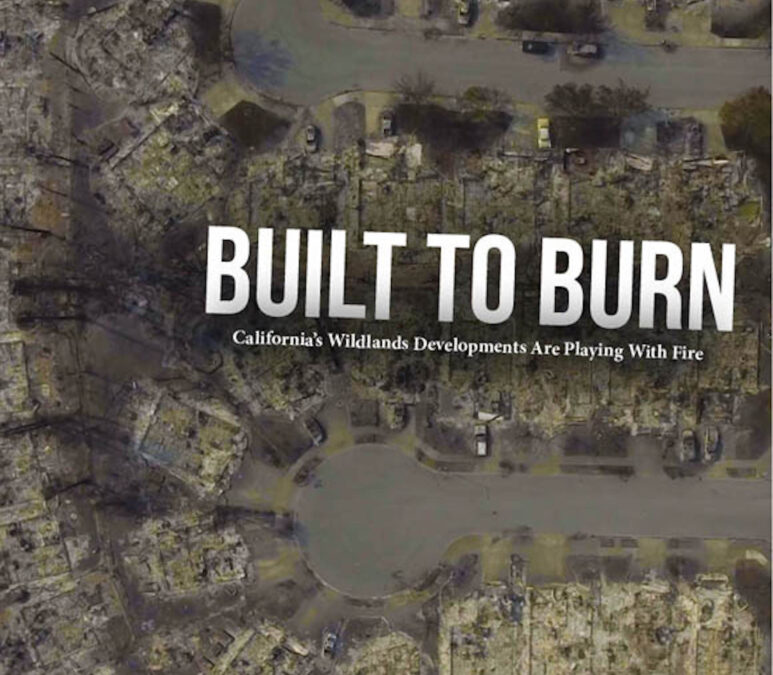 Unchecked residential development in California’s high fire-risk wildlands is increasingly a recipe for death and disaster. That’s the finding presented in a new Center for Biological Diversity report.

The report, titled Built to Burn raises serious concerns about the impact of the 1.2 million new homes proposed for the parts of the WUI—the wildland urban interface—at greatest risk for catastrophic wildfire.

“After last year’s devastating fires, state lawmakers need to listen to the science and take strong action on new construction in high fire-risk areas,” stated Tiffany Yap, a senior scientist in the Center’s Urban Wildlands program and the lead author of the report.

The report finds that development influences fire risk and points out that nearly 100 percent of recent fires have been caused by human sources such as power lines, car sparks and electrical equipment.

Over the past six years nearly 200 people have been killed in wildfires, including three in the 2018 Woolsey Fire in the Santa Monica Mountains. More than 50,000 structures have been lost, and millions of residents have experienced fire-related evacuations, power outages, and dangerous and unhealthy levels of smoke and air pollution.

The report examines how climate change is generating hotter, drier and windier fire conditions and that more than two million homes are already in areas with high fire risk. It makes the case for ending new home construction in high-fire areas and retrofitting existing homes with high fire risk, and concludes with a call for the legislature to limit construction in high risk areas.

“If California policymakers continue to expand development into highly fire-prone wildlands and dismiss the need for home hardening in high fire-risk areas, then more destructive fires will ignite and more structures will burn,” the report concludes. “More people will be killed by fires and have extended exposure to hazardous smoke. More firefighters and first responders will be put at risk. Some biodiversity and unique ecosystems will be lost. Fire suppression and recovery costs will continue to rise. We must change these destructive land-use policies and prepare our communities to safely coexist with wildfire.”

Read the full report at https://www.biologicaldiversity.org/programs/urban/pdfs/Built-to-Burn-California-Wildfire-Report-Center-Biological-Diversity.pdf