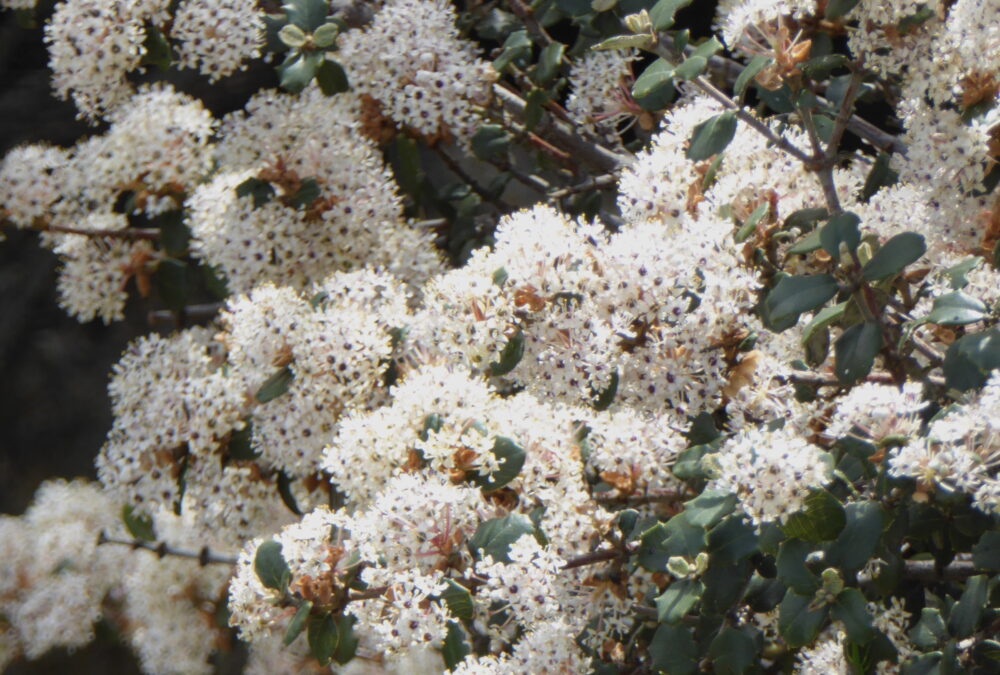 Big pod ceanothus (Ceanothus megacarpus) is estimated to make up more than 50 percent of the chaparral in parts of Topanga, although greenbark ceanothus is also abundant. On the inland side of the mountains, buckbrush ceanothus (Ceanothus cuneatus) is dominant. These beautiful, tree-like shrubs are just starting to bloom. All photos by Suzanne Guldimann
Discover

Welcome to TNT’s quarterly Almanac. Our goal is to provide an easy-to access guide to the seasons, featuring important natural events like the full and new moon, meteor showers and plant and animal life cycles. If you have a recommendation or suggestion for this section, please let us know: hello@topanganewtimes.com

This is the transition time between the three coldest and three warmest months of the year, but for the Santa Monica Mountains, where rainfall totals are at a record low, this isn’t going to be a typical spring, the kind with green hills, wildflowers and creeks full of running water—not unless a March miracle occurs.

Even in a drought year and during a pandemic spring is an ideal time for mountain hikes, star gazing, and gardening.

Wildflowers to look for this spring include the tough deep-rooted shrubs and perennials that store water in their roots and are not as dependent on seasonal rain. These include Topanga’s beloved big pod ceanothus (Ceanothus magacarpus), which covers the mountainsides in a dusting of snow-like white flowers and its blue-flowered cousin, greenbark ceanothus (Ceanothus spinosus). Other drought resistant wildflowers to look for include bulbs like wild hyacinths (Dichelostemma capitatum), soap lilies (Chlorogalum pomeridianum), and Catalina mariposa lilies (Calchortus catalinae); the amazingly adaptable wild cucumber (Marah macrocarpus), and canyon sunflower (Venegasia carpesioides), all of which store nutrients and moisture in their roots.

This is a good time to plant wildflowers in the garden, where a little extra water can help them thrive and where they will provide a lifeline for native pollinators from bees and butterflies to hummingbirds. Seed mixes with California poppies, lupine, coreopsis, and clarkia are all good options, but avoid mixes with Mexican evening primrose, an invasive that can take over the garden.

Nesting season is already underway for many birds, including most hawks and owls. Even Topanga’s beautiful but noisy naturalized parrot population is starting to pair off and look for nest sites—that’s what all that early morning squawking is about. Squirrels are also nesting right now. Use care when trimming or pruning garden plants and trees. The county’s fire clearance deadline couldn’t come at a worse time for native wildlife.

Spring is the mating and nesting season for many native animals, including coyotes and skunks. The number of vehicle strikes tends to trend upward this time of year. Slowing down and using extra caution when driving at night can help save lives.

Snakes will be more active as the nights grow shorter and the temperature rises. While most snakes, including rattlesnakes, bromate rather than hibernate, becoming active whenever the weather is warm enough, they tend to be more frequently encountered on trails and in gardens beginning in late March. The best way to avoid an encounter is to stay alert, keep dogs on leash when hiking and avoid stepping or placing hands in high grass, thick brush or anywhere snakes may be snoozing, like a wood pile or under a rock or fallen branch.

March and April are the peak migration time for the California Gray Whale. Females and their young often stay close to shore on the way north. Point Dume State Beach and Leo Carrillo State Park are top places to see passing whales.

April 22-23. Lyrids Meteor Shower. This is usually a modest meteor shower, with a rate of around 20 meteors per hour at its peak, but it can produce some impressive shooting stars. The Lyrids appear to originate in the constellation Lyra. These meteors are dust and ice left behind by comet C/1861 Thatcher. Earth enters the debris field around April 16 and exits on April 25, with the peak occurring in the early hours of April 23..

April 27. Full moon. This is the first of 2021’s three consecutive supermoons—a super moon is a full moon that occurs when the moon is at its closest approach to earth. A full super moon may look slightly larger, but its main effect is its unseen pull on the tides, which tend to be higher and lower when the earth and the moon are at apogee—their closest approach. The traditional names for the April full moon include pink moon, and egg moon.

May 6-7. Look for the Eta Aquarids Meteor Shower May 6-7. This can be an impressive show. The Eta Aquarids are the trail of dust and debris left by the comet Halley. This shower generates around 30 meteors per hour in the northern hemisphere and it often produces bright shooting stars. Look for Eta Aquarids from April 19 to May 28, with peak viewing before dawn on May 27.

May 17. Mercury at Greatest Eastern Elongation. This is the best time to catch a glimpse of this small fast-moving planet, named for the messenger of the gods. Mercury will be at its highest point above the horizon in the western sky just after sunset.

May 26. Full Moon. The June full moon is the second of three supermoons this year. The traditional name for this moon is the Flower Moon, and this year, it will be a red flower moon, thanks to a full total eclipse which is the main astronomical event of 2021.

A total lunar eclipse occurs when the Moon is entirely covered by Earth’s shadow, or umbra. Not everyone will get to see a full lunar eclipse, but Los Angeles gets a ringside seat for this astronomical phenomenon. The eclipse begins at 1:47 a.m. on May 26, and reaches its maximum at 4:18 a.m. The phenomenon ends at 5:53 a.m., just before the sun comes up. If May gray doesn’t interfere it should be well worth getting up early to see the total eclipse.