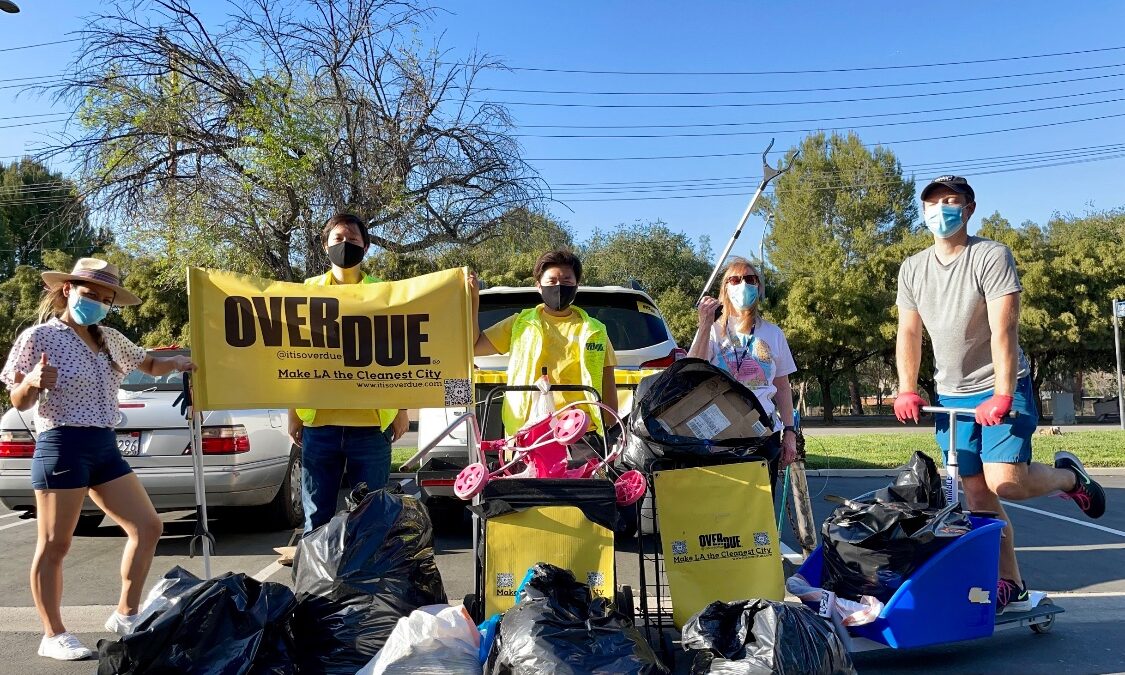 “Yesterday evening we went to our favorite bike path, Victory Blvd. We had 6 crew members join us and we collected 9 bags full of trash and 2 recyclables which weighed 87 LBs! We did our first cleanup with a cargo scooter.” Courtesy of Overdue Cleanup Crew
Environment, Feature

The inspiration to act often stems from concern for a loved one. Maxwell Suwaki was walking with his rescue pup Leon, when they stumbled upon a dangerous piece of litter — a syringe needle. Leon’s close encounter with this hazardous waste material was the impetus behind Overdue Cleanup Crew, a volunteer effort with an ambitious goal of turning Los Angeles into one of the cleanest cities on the map.

Max partnered with his roommates, Noah Tanaka and Devin Spencer, and together, the three have spearheaded a pickup crew with more than 300 volunteer members who have collected more than 29,000 pounds of trash in LA County in just 160 days.

Overdue’s philosophy is that if people don’t see any litter around, they will feel less inclined to toss it on the street. It’s when people see garbage all over the place that they feel less guilty about adding more rubbish. The organizers’ social media strategy emphasizes photographing and collecting data from the trash they pick up, and sharing some of the harmful effects this specific piece of garbage can have on the environment.

Two of the biggest culprits? Cigarette butts (which can take up to 10 years to decompose) and the type of plastic used for disposable cups. Plastic cups end up in gutters, they are stepped on driven over, and broken into smaller bits, eventually becoming micro plastics. These micro plastics are so tiny they can be found in our tap water, our seafood, traces have even been found in babies via their mother’s breast milk.

Although sometimes blues can set in over the mass scale of how much garbage there is out there, one of the best remedies for those blues may be rallying neighbors and friends and picking up some trash.

“My team and I are just getting started on this journey”, Max shares. “One of the messages we really want to get out there that this isn’t just an activity for adults. We really want to motivate younger community members to get involved.”

Recently, Los Angeles City Councilmember Bob Blumenfield and the City of Los Angeles awarded Overdue Cleanup Crew a certificate of recognition for their daily efforts to beautify their neighborhoods and bring the community together.

In celebration of Earth Month, Overdue, The Well Refill shop, La Chingona Tacos and the Topanga New Times crew will be joining together to sponsor a clean up at Topanga State Beach on Sunday, April 18, from 3:30-5:30 p.m.

Meet at the Malibu Feed Bin, look for the yellow OVERDUE sign. Wear bright colors and closed-toe shoes, bring your own gloves and grabber, or buy a grabber on site for $20(cash/Venmo). Weather related cancellations will be posted on our social media 3 hours prior to the event. Participants must wear a facemask at all times. See you there!