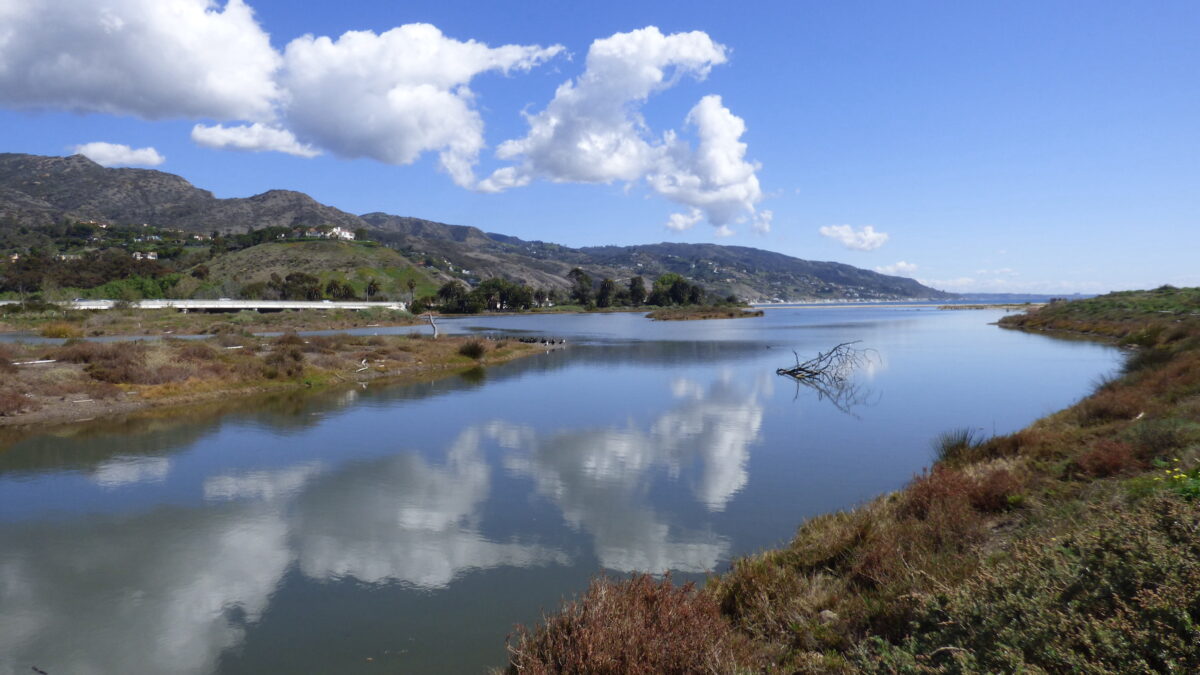 Malibu Creek flows into the ocean at the Malibu Lagoon, next to Surfrider Beach. The battle over water quality in this watershed led to the creation of the Surfrider Foundation in 1984. The nonprofit is now an international advocate for water quality and coastal resource conservation. All photos by Suzanne Guldimann
Discover

The Hyperion sewage spill disaster highlights the immediate impact pollutants can have on the Santa Monica Bay, but water quality in the Santa Monica Mountains and along the coast is a complex issue, and pollution sources are not always as easy to identify as a pipe spewing 17 million gallons of toxic waste into the ocean.

Topanga is part of the 414-square-mile Santa Monica Bay Watershed Management Area, which includes the entire coastline of Los Angeles County and the watersheds in the Santa Monica Mountains that empty into the bay.

Los Angeles was built with a focus on flood control. Creeks and rivers were channelized, seeps and springs drained and paved over. The idea that a water quality management plan is just as important as managing flood risk is relatively new. The Santa Monica Bay only received recognition as a nationally significant water body in the late 20th century. It was included in the National Estuary Program in 1989. The first watershed plan was developed in 1995. The Santa Monica Bay Watershed Commission was established in 2002 to oversee implementation of that plan. The commission has had a lot of catching up to do.

A watershed is a geographic area where all the water from springs, rain, and runoff collects and drains into a single drainage that can be a stream, creek, or river, depending on the size of the area. The northern Santa Monica Bay has three main watersheds: Ballona Creek, where the Hyperion plant is located (130 square miles); Malibu Creek (109 square miles), which flows into the ocean at the Malibu Lagoon; and Topanga Creek (18 square miles).

All three are officially Critical Coastal Area Waterbodies, and they are listed as impaired on the most recent Clean Water Act list.

Ballona Creek is heavily urbanized and most of the streams that once fed into it have been channelized for decades. Urban and industrial runoff are the major problems in this watershed, but even in a severely imparted state, this remains one of the last major wetlands in the county.

Thanks to conservation efforts, Topanga Canyon Creek and its tributaries are still mostly natural and not channelized. This watershed still supports a wide variety of plant and animal life, including many rare species, but even in this relatively natural environment there are a host of problems, ranging from heavy metals like lead and arsenic, to chemicals like PCBs and DDT, as well as high levels of bacteria from human and animal waste like E. coli and Enterococcus. Giardia, a parasitic protozoan, which is also spread by exposure to fecal waste, is also present throughout the watershed.

It wasn’t always that way. Springs throughout Topanga Canyon provided safe drinking water for residents well into the 20th century. A spring on Topanga Canyon Blvd. drew people from all over the area, and it wasn’t unusual to see someone filling bottles there, even after water quality began to deteriorate and the County posted a warning about bacteria levels. Longtime Topanga resident Marsha Maus recalls that the spring remained in use until the late 1970s or early 1980s, when a road safety project that involved dynamiting unstable rocks caused the water source to dry up.

The Malibu Creek watershed is also largely undeveloped, but the water here has always had issues, even before upstream development and environmental degradation became a problem. The main creek that cuts through the mountains is unusual because it was there before the mountains formed. This ancient waterway has carved the only natural pass through the Santa Monica Mountains, a canyon that is more than 500 feet deep in some areas, but some of the stone the creek has cut a channel through is a type of marine sediment deposited during a period of heavy volcanic activity. The Monterey, or Modelo, formation contains high levels of naturally occurring nitrates, sulfides, and heavy metals. Together with anthropogenic contaminants including bacteria, fertilizer, and trash, this potentially toxic cocktail often causes low oxygen levels in the summer and algae blooms that poison the water, killing aquatic life.

There are numerous smaller watersheds in addition to the big three. Almost all of them face issues. Sometimes the cause is relatively easy to diagnose. A few years ago, a problem with persistent high levels of bacteria in one of the smaller creeks in western Malibu was traced to a property where manure from horses was being dumped into a small stream.

Sometimes the contamination is systemic, or ‘non source point.” Ramirez Creek, a 3,350-acre “subwatershed” in Malibu, and Marie Canyon, part of the 4,300-acre Corral Canyon subwatershed, experienced years of failing water quality grades. The issue was successfully addressed at both locations with costly but efficient filtration systems that clean the water before it flows into the ocean.

Although water quality at the beach has improved, almost every creek and stream in the Santa Monica Mountains, large or small, is contaminated with waterborne organisms that can pose a serious health threat not just to humans but also to animals. Contaminated water is potentially deadly for wildlife, including several highly endangered species. Water quality issues have put Western pond turtles, California newts, and the critically endangered Southern steelhead trout at increased risk of extinction, a situation that is exacerbated by climate change.

Topanga residents can help by making sure runoff doesn’t end up in the watershed. Common contaminants include fertilizer, dog waste, pool chemicals, soap, antifreeze, motor oil, construction debris, and seepage from failing septic systems. The ongoing drought makes the surface water, from deep pools in Topanga Creek to the smallest natural springs and seeps— even more essential than usual for wildlife. Water is a gift, one we haven’t always treated with the reverence it deserves.

Learn more about the Watershed Management Plan, and the Santa Monica Bay Restoration Commission that oversees it, at www.smbrc.ca.gov.