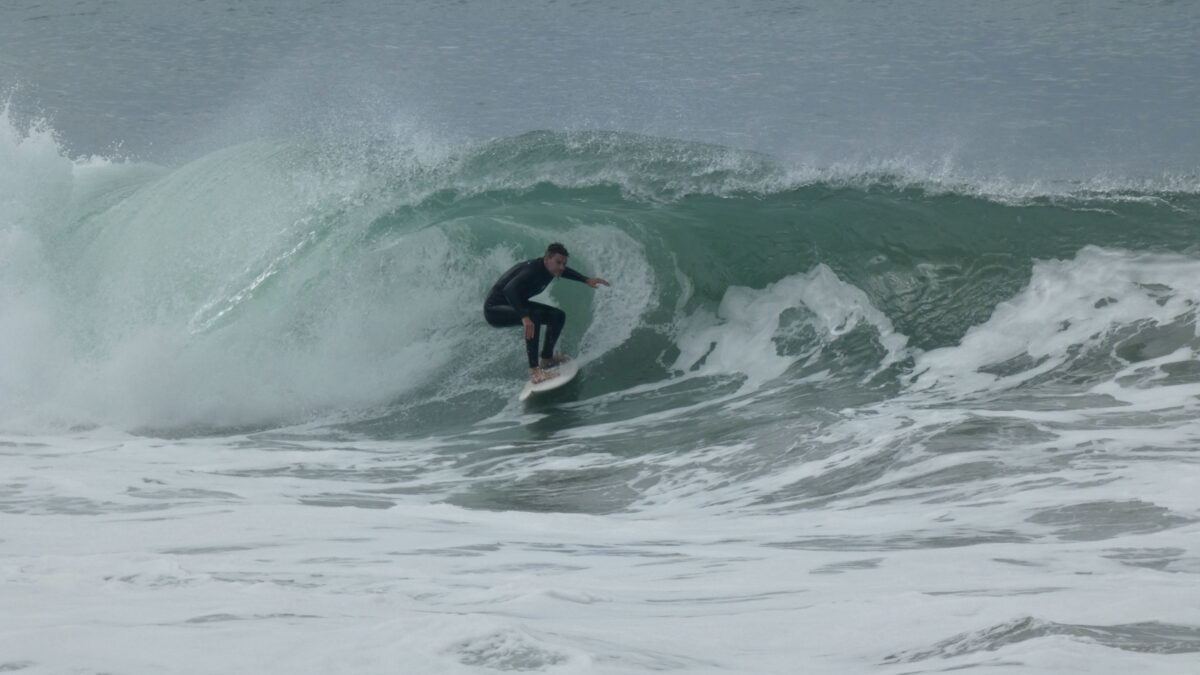 Hurricane Linda never came anywhere near the coast of California, but she sent us the best surf in months, like this perfect, barrel-shaped wave.Photos by Suzanne Guldimann
Discover

The talk at the beach last week was all about Linda, but she wasn’t a person, she was a tropical storm with the potential to bring big waves to local surf breaks.

When the southern swell rolls in and the surf is up, surfers of all ages skive off work and school and head for the beach. Surfing is an intrinsic part of California culture, but the waves that power that dream of endless summer aren’t exactly local: they can originate as far away as Antarctica.

Peak summer surf season in California coincides with eastern Pacific hurricane season, which starts in May, ends in November and peaks in late summer and early autumn. The summer swell in California is powered by winter storms that originate in the southern hemisphere.

Linda was the second major hurricane of the season. She was birthed off of Central America on August 6, gathering energy until she briefly became a category 4 hurricane. This storm delivered the best surf in months at local beaches, but it also walloped parts of the coast—big surf combined with high tides flooded Westward and Zuma beaches in Malibu, undermining an already damaged road and swamping the beach with water and debris.

By the time this article is in print, Linda will have blown past Hawaii, her energy dissipated, and the focus will be on a storm currently brewing in the Tasman sea, between Australia and New Zealand, that could bring chest-high surf to California’s south facing beaches by August 27.

Energy is transferred from the storm winds to the water creating waves. The longer the fetch—the unobstructed stretch of water that wind travels over—the bigger the wave. In the same way a radio wave can travel through the air, an ocean wave can travel clear across the Pacific: the longer the wavelength, the faster and bigger the wave. California is perched on the edge of the continental shelf, which means waves can deliver that energy to the beach in a powerful punch.

Waves may one day soon provide a renewable source of electricity, but surfers are more concerned about whether or not they can ride them. Before a surfer can surf, the wave needs to be directed and shaped to produce rideable surf. Waves break on every beach on earth but not every beach has the right kind of barrel-shaped surf that surfers can ride. Surf breaks exist because of a delicate balance of elements that include fluid dynamics, weather patterns, bathymetry—the depth of the water—currents, and geology. There are three main types of surf breaks: beach breaks, point breaks, and reef breaks.

Zuma Beach is an example of a beach break. This wide stretch of beach with its shallow sandy sea floor and multiple sand bars is perfectly angled to break the waves into that classic tube shape, but the wave quality depends heavily on the tide and the winds. On a good surf day with a summer south or southwest swell the waves can be picture perfect. When conditions don’t align the surf is choppy and poorly formed. The shallow water can also create a savage shore break that has caused serious injuries and broken countless boards.

Malibu Surfrider is a series of three point breaks: First Point is the most famous break and its nearest the Malibu Pier, but plenty of surfers gravitate towards Second Point, or Kiddie Bowl, a short fast break better for short boards, and Third Point, located at the far west end of the Malibu Lagoon. This beach is such a significant part of surf culture that it became the first surf break to be listed on the National Registry of Historic Places in 2018.

Topanga is also a point break—a single point that directs the waves into a fan-shape that breaks right and rolls to shore to the east of the point, leaving plenty of room for surfers to catch a wave. Topanga has a reputation for breaking when other beaches aren’t, and it’s busy year round.

The 1991 film Point Break was shot in part at Leo Carrillo, where the surf break isn’t so much a point break as it is a reef break. The waves at Seco’s—the main surf break at Leo—are shaped and funneled through reefs of volcanic rock.

Reef breaks can generate giant surf. Mavericks in Northern California, Cloudbreak in Fiji, and Jaws in Maui are all epic reef breaks. So is Nazare, in Portugal, where an undersea canyon focuses storm swell and generates 100-foot waves, some of the biggest anywhere.

Leo Carrillo’s reef break is small, with barely room for half a dozen surfers to take off on a wave, but even here there is the potential for impressive double overhead sets when conditions are right.

Many surf breaks are a mix of elements. The infamous Wedge at Huntington Beach has been described as a hybrid mutant. It’s generated by a cross between a natural beach break and a man made reef break. The Wedge wave forms  when surf bounces or reflects off of the Huntington Beach jetty. When conditions are right, Huntington Beach generates a 20-30-foot wave.

Hermosa, Redondo and Manhattan beaches all have breaks that are created by man made elements like breakwaters and groins, but often human interference has a negative impact on the waves. Despite that elemental power, surf breaks can be fragile. Seawalls and other kinds of coastal armoring used to protect houses, roads, and infrastructure can change wave dynamics; and so can sea level rise.

Longtime local surfers claim that a lagoon restoration project in the 1980s changed how the surf breaks at Surfrider’s Third Point, making it mushy, and there are currently concerns that erosion related to a second restoration project at the lagoon is negatively impacting First Point.

An earlier generation of surfers were among the first wave of conservationists in Malibu. They organized in the late 1940s to fend off a plan to build a marina and breakwater that would have entirely eliminated Surfrider’s three surf breaks.

Surfers and other activists have successfully fought to prevent marinas from being built at Topanga Creek, the Malibu Lagoon, and Point Dume, but other areas haven’t fared as well. In 1966, a major surf break was destroyed when a harbor was constructed at Dana Point. Surfer and writer Chase Scheinbaum, in a 2016 feature in The Inertia, described it as “Southern California’s only big wave.”

Natural forces can also impact surf breaks. The wave at County Line Beach, celebrated in the Beach Boys’ song “Surfin’ Safari”, is shaped in part by bars of cobblestones. The stones were rearranged during a major storm in the 1980s. It took years for the wave to return.

Surfers are also at the mercy of wind, which can blow waves out and make them unrideable; the fluctuation of the tides; water pollution that can result in beach closures; and overcrowding—surfing’s popularity is a blessing and a curse. The size of the wave is only one part of the equation, waves need to be the right shape, and that is subject to many variables as well. Some surf breaks can be surfed year-round; others break only when conditions are right. Some summers bring wall to wall big surf; others are serenely and infuriatingly calm.