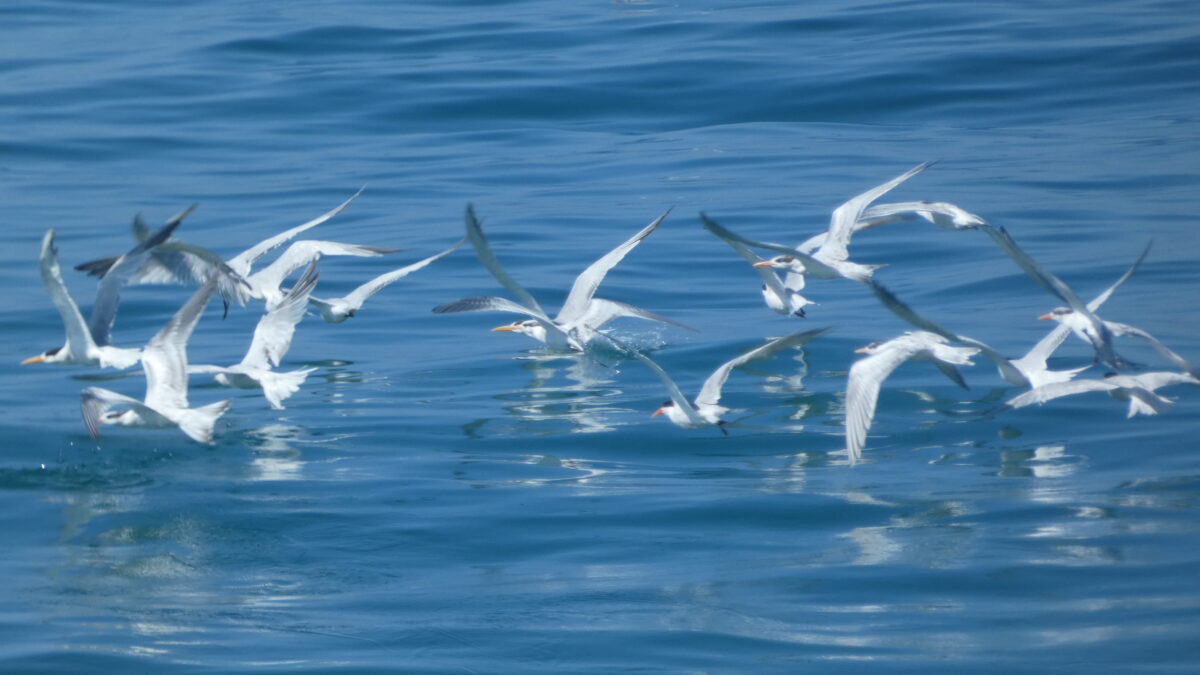 Elegant and royal terns (Thalasseus elegans and Thalasseus maximus) arrived in large numbers on the local coast last week. Some terns winter in Southern California, but others stay for just a few days or weeks, pausing on a journey that will take them all the way to Chile. All photos by Suzanne Guldimann
Discover

Welcome to TNT’s quarterly Coast and Canyon Almanac. Our goal is to provide an easy-to-access guide to the seasons, featuring important natural events like the full and new moon, meteor showers, and plant and animal life cycles. If you have a recommendation or suggestion for this section, please let us know: hello@topanganewtimes.com

For man, autumn is a time of harvest, of gathering together. For nature, it is a time of sowing, of scattering abroad.”

Autumn in the Santa Monica Mountains usually begins with the best summer weather of the year, the clearest days, the warmest ocean temperatures, and ends with vivid sunsets and the promise of winter rain. This year, the season’s joys are tempered by extreme high fire risk and the ongoing challenges of life in the time of coronavirus, which threatens once again to overshadow the fall and winter holiday season, but there is still plenty to be thankful for. This is a season of rare beauty.

Autumn won’t officially begin until the equinox on September 22, but the first fall migrants are already arriving. Flocks of terns crowd local beaches, filling the air with their piercing cries, whirling like snow in an antique Venetian glass snow globe. The terns are always among the first travelers to arrive. The Santa Monica Mountains and shoreline are a magnet for migrants pausing to rest on the long journey from the northern hemisphere to the southern.

Listen at night for the calls of these long-distance travelers that depend on the stars to guide them, and maybe turn out the lights a little earlier than usual to help them find their way.

This area is also the destination for many overwintering bird species. Songbirds like warblers, white-crowned sparrows, hermit thrushes, robins and cedar waxwings will be arriving in gardens soon. On the shore, look for oystercatchers, phalaropes, curlews, and surf scoters. Sometimes more exotic visitors stop by—snow geese, white-faced ibis and colorful ducks like hooded mergansers and Northern shovelers. Late autumn and early winter bring daytime minus low tides that offer shorebirds an important source of food. With the loss of so much of their habitat, some wetland birds have adapted to foraging on the beach.

While winter birds are gathering, the resident birds and many species of mammals are dispersing. This year’s generation of owls, hawks, raccoons, bobcats and coyotes will soon be on their own. We can help them by keeping domestic animals inside, cleaning up food sources like fallen fruit or uneaten pet food; never using rodenticides; and slowing down on the road as the days grow shorter.

Birds aren’t the only migrants. Male tarantulas are on the march through November, sometimes traveling miles to find a mate. Monarch butterflies are also on the move, seeking nectar from garden flowers as well as wildflowers to sustain themselves on their long migration.

Even in a year of extreme drought there are autumn wildflowers in the Santa Monica Mountains. The bright red flowers of California fuchsia (Epilobium canum) attract hummingbirds. Golden bush (Isocoma menziesii) is a favorite with fall butterflies and native bees. So is coyote bush (Baccharis pilularis), which fills the air with its thistledown seeds and the sweet musky scent of its inconspicuous but pungent flowers.

In old gardens all over the mountains, Amaryllis belladonna, also known as “naked ladies”, blooms pink and fragrant in September, while plumeria adds its tropical fragrance to the air. Loquat trees bloom in mid autumn, too, and this is the season when pomegranates and figs are ripe, attracting birds and opportunists like coyotes. The local wildlife also have a taste for late garden tomatoes, and autumn windfalls like pineapple guavas and palm tree fruit. Water and food is scarce this year, drawing wildlife deeper into the urban interface in pursuit of necessities. We all need to be aware of the presence of our wild neighbors.

Autumn color in the wild tends to appear later in the season, although the poison oak and its non-toxic cousin skunk bush are already turning gold and scarlet, and the wild black walnuts are touched with yellow. Fall color in the Santa Monica Mountains is usually limited to riparian corridors where deciduous trees have a foothold, and where cold air drainage drops temperatures at night. Cottonwoods, willows, sycamores, and valley oaks are the best sources of autumn gold. Malibu Creek State Park, which has a microclimate that often drops into the 20s in late autumn, is a good place to look for autumn color, but gardens are often the best source of fall foliage in the Santa Monica Mountains. The liquidambar trees already have their first flame-colored leaves. Other reliable sources of fall color in the garden include ash trees, ginkgos, and ornamental pears.

We may have a long wait this year for winter rains. The central tropical Pacific Ocean is currently in a neutral climate state, but experts are predicting a 55-percent chance that La Niña will return later this fall and last through the Northern Hemisphere’s winter season. The forecast suggests a long season of Santa Ana winds in the Santa Monica Mountains.

The “devil wind” brings fire fears and fire risk; static electricity that plagues the cats and anyone with long hair; power outages; and migraines; but it also brings orange and violet sunsets; and clear night skies full of stars.

September 16. Look for Saturn near the waxing gibbous moon.

September 17. Jupiter and the Moon will appear at their closest approach of the year, with Saturn nearby.

October 6. New Moon. The Moon will be located on the same side of the Earth as the Sun and will not be visible in the night sky. This phase occurs at 11:05 UTC. This is the best time of the month to observe faint objects such as galaxies and star clusters because there is no moonlight to interfere.

October 7. Draconids Meteor Shower. This is a minor meteor shower produced by dust left in the wake of comet 21P Giacobini-Zinner. The Draconids only produce around 10 meteors per hour, but it’s unusual because the best opportunity to view this shower is in the evening, just after sunset, instead of before dawn or in the middle of the night. This year, the Draconids occur close to the new moon, providing optimal dark skies.

October 21-22. Orionids Meteor Shower. The Orionids are generated by dust left by Halley’s Comet. This meteor shower can produce up to 20 meteors per hour, but the October full moon will make it hard to view this year. The Orionids peak in the early hours of October 22, but Earth enters the debris field on October 2 and exits on November 7, offering a little extra time to catch these shooting stars.

October 25. Mercury at Greatest Western Elongation. Tiny elusive Mercury is a challenge to view, but this planet named for the messenger of the Roman gods will be at its highest point above the horizon in the predawn sky. Topangans with an eastern view, or those who have an early morning commute over the mountains will have an opportunity to catch a glimpse of Mercury low in the eastern sky just before sunrise.

October 29. Venus at Greatest Eastern Elongation. Unlike Mercury, Venus is one of the brightest objects in the sky, and this month Earth’s nearest neighbor planet is shining in her role as the evening star. Venus reaches its greatest eastern elongation—47 degrees from the Sun on October 29. Look for this bright planet in the western sky just after sunset.

November 4, 5. Taurids Meteor Shower. Like the Draconids, the Taurids are a minor meteor shower that could shine this year, thanks to the new moon. This shower has two sources: debris from Asteroid 2004 TG10 and dust from Comet 2P Encke. It’s a big debris field and Earth travels through it from September 7 to December 10, but the peak night for meteors is November 4. The best time to look is just after midnight.

November 17, 18 – Leonids Meteor Shower. The Leonids shower is caused by dust from comet Tempel-Tuttle, and runs from November 6-30, peaking in the early hours of November 18. This shower can generate up to 15 meteors an hour and sometimes produces impressively bright meteors, but this year the nearly full moon will make it hard to view. The best time to look is after midnight.

December 4. New Moon. This new moon will bring “King Tides,” some of the highest and lowest tides of the year

December 13, 14. Geminids Meteor Shower. This is usually the best meteor shower of the year, with more than 100 meteors an hour at its peak. A waxing gibbous moon means viewing conditions won’t be ideal this year, but this show is always worth seeing. The Geminids shower is produced by debris left behind by asteroid 3200 Phaethon, which was only discovered in 1982. Meteors from this shower can occur any time between December 7-17, but peak after midnight on December 14.