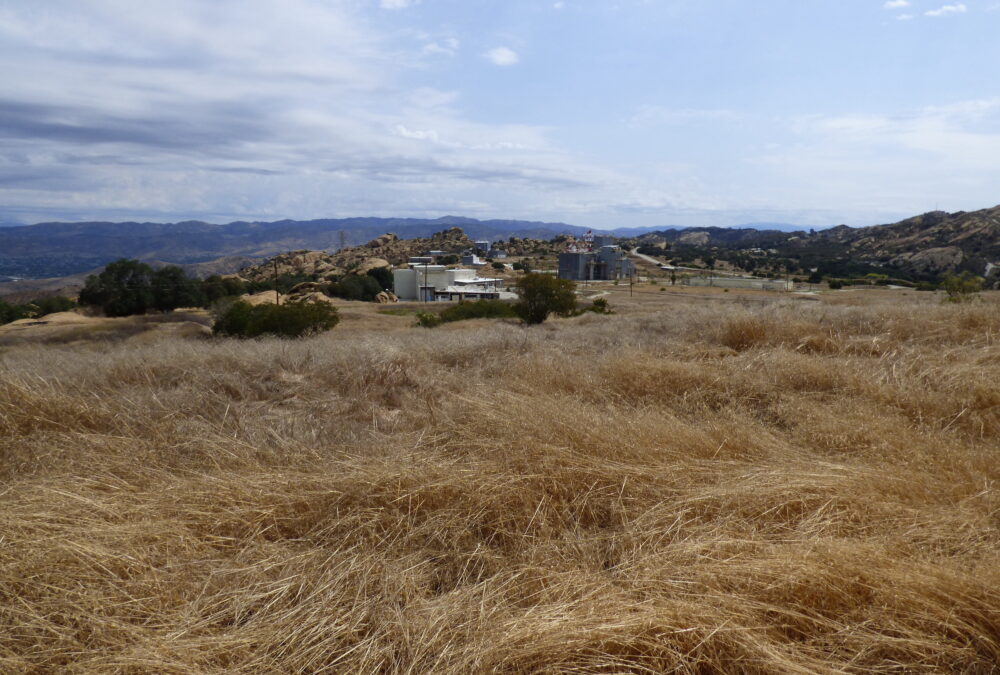 It may not look like much now, but in 1959 this tranquil hillside was the site of the worst nuclear reactor accident in U.S. history. The buildings that housed the Santa Susana Field Laboratory’s reactors were demolished years ago, but the radioactive contamination remains a persistent problem on site, a problem with a potential half life of more than 75,000 years. That’s how long it takes the radioactive isotope thorium-230 to decrease by 50 percent, and it’s just one of the radiological contaminants present at the field lab, and now also present at several surrounding site, spread as far afield as Simi and Thousand Oaks by the Woolsey Fire. Photo: Suzanne Guldimann
Discover

Radioactive particles from the Santa Susana Field Laboratory (SSFL) spread during the Woolsey Fire in 2018, despite repeated claims to the contrary from officials and agencies, including the California Department of Toxic Substances Control (DTSC).

A study of 360 samples of soil, dust and ash collected three weeks after the Woolsey fire, has revealed 11 instances of radioactive contamination, according to a peer-reviewed study published in the Journal of Environmental Radioactivity. Only a small amount of radiation was detected. The finding states that 97% of the samples showed “activities at or close to site-specific background levels.” However, three percent of the samples contained radioactive micro-particles. The conclusion? “Radioactive contamination from the partially-burned former Santa Susana nuclear research facility was found in the fire zone…”

The data revealed that while there was no widespread deposition of radioactive particles, there were two “radioactive deposition hotspots” and “significant off-site contamination” near the perimeter of SSFL.

From 1948 to 2006, thousands of NASA rockets were tested at the site, but the field lab was also home to as many as 10 small nuclear reactors, operated by the Atomic Energy Commission, the predecessor to the Department of Energy.

The nuclear reactors were located at the Energy Technology Engineering Center in Area IV, the site of a notorious experimental liquid sodium nuclear reactor accident in 1959, that released massive amounts of radioactive contamination into the environment. That meltdown is now regarded as the worst nuclear accident in US history, but it was just one of a number of nuclear incidents at the field lab, and while environmental mitigation has been underway for years, and many of the buildings in area IV have been completely removed, radioactive contamination at the site remains a persistent problem.

The Woolsey Fire is blamed on faulty SCE power lines located at the field lab site. The most heavily contaminated parts of the field lab did not burn during Woolsey. The new findings raise concerns over what would be released into the environment if it did.

The study, entitled “Radioactive microparticles related to the Woolsey Fire in Simi Valley, CA,” was conducted by Marco Kaltofen of the Department of Physics, Worcester Polytechnic Institute, and Maggie and Arnie Gundersen of Fairewinds Energy Education. The researchers found that most of the radioactive contamination was located near the SSFL perimeter. However, the highest level of contamination wasn’t found next to the field lab, it turned up in Thousand Oaks—not far from Bard Lake, and more than nine miles away from the source. This sample was 19 times more radioactive than background levels.

The researchers reported that “excessive alpha radiation in small particles is of particular interest because of the relatively high risk of inhalation-related long-term biological damage from internal alpha emitters compared to external radiation.”

A map that accompanies the study indicates that radiation from the field lab also turned up in samples collected in Simi (a cocktail of Cesium-137, thorium microparticles, and high levels of beta radiation), Oak Park (high beta levels), Agoura Hills (thorium-230), and a second site in Thousand Oaks near Wildwood Park (thorium microparticles). The radiation also traveled into part of the West Valley. One sample from West Hills contained high alpha radiation; a second had high levels of beta radiation.

Physicians for Social Responsibility Los Angeles is a watchdog organization that raised questions during the Woolsey Fire. The organization released a statement in response to the new study:

“The findings contradict conclusions by [DTSC] which, a mere nine hours after the fire began on November 8, 2018, declared that the fire didn’t result in releases of hazardous materials. CalEPA/DTSC issued an interim study in December 2018, affirmed in a final version in December 2020, which asserted that ‘data from sampling and measurements did not detect the release of chemical or radiological contaminants from SSFL.’”

PSRLA concludes, “Had the state and the parties responsible for the contamination (Boeing, Dept. of Energy, and NASA) met their legally binding obligations to clean up SSFL by the 2017 deadline, the 2018 fire couldn’t have released contamination.”

The new study unleashed a flurry of letters from congressional and locally elected officials demanding answers, but that does little to calm fears raised by residents of the Woolsey Fire burn zone, who are asking how much more radiation remains to be discovered and what the officials who denied that this scenario was possible will do now to address the issue.

Wind direction determined where the radioactive fallout from the field lab ended up in November 2018. Most of the Santa Monica Mountains appear to have been spared this time, but the risk remains present for everyone living in the shadow of the facility: a deadly legacy of the Cold War.

The study is available online at: www.sciencedirect.com/science/article/abs/pii/S0265931X21002277?via%3Dihub

For a fascinating look at the innovative technique the researchers used to confirm that the radioactive particles originated at SSFL, check out: www.fairewinds.org/demystify/woolsey-fire-data