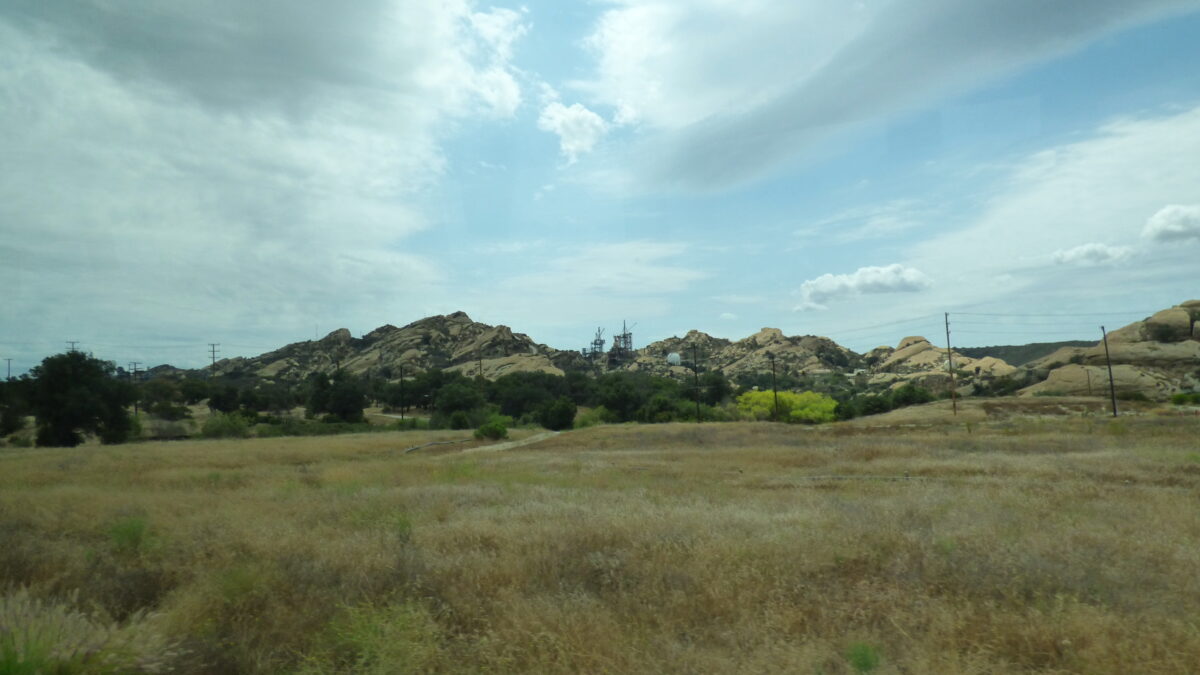 The Coca test stands, where the rockets for the Apollo moon missions were test fired, loom above the sandstone rock formations where ancient Chumash astronomers once marked the winter solstice. In the foreground is an empty field that was the site of the worst nuclear reactor accident in US history. The Chumash rock art was preserved because it was off limits at the top secret facility, but it is contaminated with dangerous levels of radioactive and chemical waste from the laboratory. The rocket tests at the site made it possible to reach the moon and to successfully launch projects today like the James Webb Space Telescope, but they also resulted in contamination to the soil, water, and bedrock that can never be fully mitigated. Our quest for the stars has come at a price. All photos by Suzanne Guldimann
Discover

The fence we walked between the years

Did balance us serene;

It was a place half in the sky where

In the green of leaf and promising of peach

We’d reach our hands to touch and almost touch the sky,

If we could reach and touch, we said,

‘Twould teach us, not to, never to be dead.

We ached, and almost touched that stuff;

Our reach was never quite enough.

—Ray Bradbury, “If Only We Had Taller Been”, written on the arrival of Mariner 9 to Mars, 1971

The James Webb Space Telescope offers the promise of a different future, a bright, optimistic tomorrow, one that puts humankind’s quest to reach the stars once more in reach. This is an international project that has brought together teams of scientists from the US, the European Union, and Canada. The telescope was launched into space from French Guiana in South America, and it’s now in orbit a million miles from Earth, but this is a story that is deeply rooted in our past right here at home.

Hughes Research Laboratory sprawls across a hilltop just above the Malibu Civic Center. A modest plaque in front of the lab states: “On this site in May 1960, Theodore Maiman built and operated the first laser. A number of teams around the world were trying to construct this theoretically anticipated device from different materials. Maiman’s was based on a ruby rod optically pumped by a flash lamp. The laser was a transformative technology in the 20th century…”

Maiman’s invention changed the world. In May, 2010, HRL Laboratories was designated a Physics Historical Site by the American Physical Society for Maiman’s accomplishment, and presented with the plaque. The archivist dug up a hard copy of Maiman’s speech for the dedication ceremony and a couple of photos.

The atomic clock was developed at the lab the same year as the laser. It’s an essential part of GPS technology. The lab also pioneered satellite communication. Satellite communication antennas were tested in Malibu Canyon for years, and the ion propulsion system for NASA’s Deep Space 1 probe was developed in Malibu in 1998, but there isn’t any plaque commemorating those achievements. Several years ago, I asked HRL spokesperson Michele Durant about the lack of fanfare. She told me that it’s because HRL’s focus is on the future, not the past. “It’s a working lab,” she said.

Just up the coast at Solstice Canyon there’s another space age site. Thompson-Ramo-Wooldridge (TRW) rented 10 acres on the Roberts family ranch from 1961-73. According to the National Park Service, which now owns the site, the location was used to develop “super sensitive magnetometers to study the magnetic fields in space and to test satellite equipment for space missions.” NASA’s Pioneer space exploration satellites, including the Pioneer 12 Venus orbiter launched in 1978, reportedly utilized technology originally tested in Solstice Canyon.

“Solstice Canyon was one of only three places in the world chosen to conduct such tests, due to the lack of man-made or natural disturbances,” the NPS brochure states.

The TRW buildings burned during wildfires in 1996 and again in 2007. The only thing left is an abandoned parking lot and the footprint of the curious round structure that housed the test equipment, but the name survives in TRW Loop Trail.

The biggest and most significant space lab in the local mountains is the Santa Susana Field Laboratory, at the northern end of Topanga Canyon Blvd. The field laboratory, also known as “the Hill,” was built in 1947 by Rocketdyne, a division of North American Aviation. Today the site is an island of open space in a sea of mass development that stretches from the Simi Valley to the San Fernando Valley, but in the 1940s the mountaintop was remote and isolated while still being close to Los Angeles, the post WWII center for the emerging aerospace industry. It was the perfect place to test rock engines, or at least, it seemed that way at the time.

Liquid propellant rocket engine testing began at the SSFL in the late 1940s for the U.S. space program. Elements of almost every U.S. space project in the 20th century—from Mercury to the so-called “Star Wars Initiative”—were tested or developed in part at the laboratory. Longtime residents remember that the sky would turn orange and the ground shook when NASA tested the rocket engines that would transport the Mercury and Apollo missions into space. The phenomenon rattled dishes and nerves throughout the western San Fernando Valley, and was visible from as far away as the top of Topanga.

SSFL was essential to the space program, and the advancements made at the lab continue to inform the current generation of rocket technology, but there was a darker side to the research that went on up the mountain: contamination.

Fuel from an estimated 30,000 rock tests and the chemicals used to flush the rocket engines have contaminated the soil, groundwater, and even the bedrock. Disposal techniques in the 1950s and ’60s involved blowing things up or burning them in open pits—not one of the more forward-thinking approaches to highly toxic and potentially deadly industrial waste. SSFL is so contaminated that runoff and creek water must be filtered before it leaves the property, and even with state-of-the-art mitigation, the site will remain contaminated for centuries.

From the early 1950s until 1980, SSFL was also home to the U.S. Department of Energy’s nuclear research program.

According to the Santa Susana Field Laboratory Advisory Panel, over its lifetime, Area IV of SSFL was home to: “ten reactors, numerous “critical” facilities (a kind of low-power reactor), a plutonium fuel fabrication facility, a uranium carbide fuel fabrication facility, a “hot lab” (purportedly the largest in the country) for remotely cutting up irradiated nuclear fuel shipped in from around the country from other AEC/DOE nuclear facilities, and a sodium burn pit, in which sodium-coated objects were burned in open-air pits.” Area IV was also home to a special lab that simulated the conditions in outer space. It was used to test nuclear-powered unmanned space probes.

An experimental liquid sodium nuclear reactor experienced a partial meltdown in 1959, spewing radioactive material into the atmosphere. It was the first of several reactor incidents.

The report also states that at least four reactors suffered accidents and that radioactively and chemically contaminated items that were not supposed to be burned were burned there for decades, “causing extensive contamination of soil and groundwater and offsite migration in surface water runoff…the accident history of the site is poorly understood, given the limited amount of disclosure that has occurred to date.”

All of that contamination didn’t stay onsite, either. Studies have found that the neighboring population has been exposed to levels of contamination exceeding EPA standards and that there are elevated cancer rates in proximity to SSFL.

There’s no way of knowing the extent of the impact in the community and to the workers who were exposed on site. One thing we do know is that people died as a result of that contamination and that thousands were exposed to an elevated risk of cancer. Lawsuits have been filed. The debate still rages and there are no easy solutions or answers. The radioactive contamination is still present despite the removal of dozens of buildings and all of the reactors.  A recent study revealed that the Woolsey Fire, which ignited near Area IV at SSFL, released an assortment of exotic radioactive particles, despite repeated denials from officials who stated that it was impossible for radioactive contamination to travel offsite.

Boeing acquired the SSFL—and 50 years of environmental contamination at the site—in 1996. The debate over clean up is ongoing, complex and controversial. Some activists are calling for complete remediation, which would require removing vast quantities of soil and rock, potentially including significant Chumash ceremonial sites and all of the remaining NASA structures.

At the other end of the spectrum are preservationists who hope to see the NASA portions of the site, where the rocket engines for Mercury, Apollo and the Space Shuttle program were tested, preserved as a National Monument. This would entail cleaning the site to contamination levels safe for park goers, but not to “residential” levels.

The American Institute of Aeronautics and Astronautics and the American Nuclear Society have recognized portions of the lab site as historically significant. It’s unlikely that there is another place on earth with such a remarkable combination of historic significance.

And then there is the Chumash ceremonial site, which is also a monument to astronomy. The Burro Flats Painted Cave preserves not only some of the best preserved rock art in California but also a significant winter solstice astronomical alignment created by the ancient Chumash. This remarkable site is on the National Register of Historic Places, and there is a move to seek UNESCO World Heritage status. The Santa Susana Field Laboratory is critical wildlife habitat and open space; it’s an ancient historic and sacred Chumash cultural resource; it’s a monument to the American space race—without the work accomplished at the lab, projects like the James Webb Space Telescope would not be possible, and neither would our 21st century life so dependent on satellites and space technology, but it’s also a reminder that technology comes at a cost—sometimes a terrible one—and that is something that is critically important, as well. Ad astra, per aspera—to the stars, through hardships.