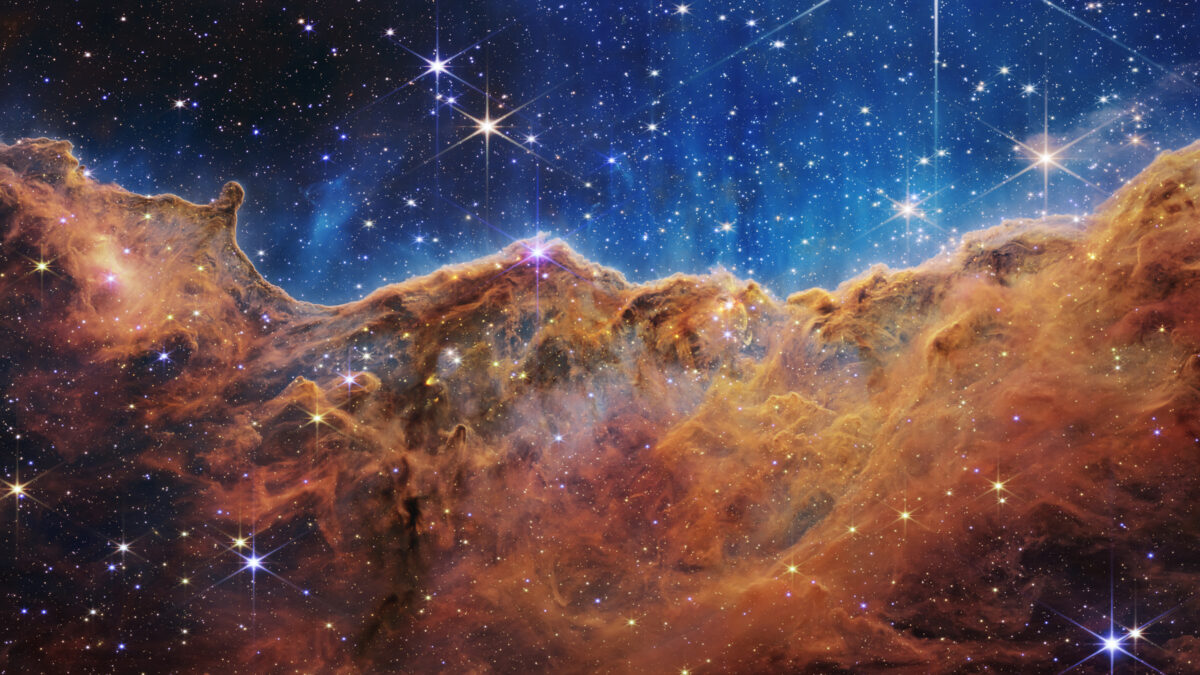 We set sail on this new sea because there is new knowledge to be gained, and new rights to be won, and they must be won and used for the progress of all people.

The photos were everywhere this week: a vast panorama of galaxies in deep space, warped by gravity; a dying star exploding in a web of rainbow gas and dust; a towering cliff of stars and star stuff seven light-years high. The beauty of the first images from NASA’s new James Webb Space Telescope is breathtaking, but the scientific significance of what these images reveal is almost unimaginably astounding. This is much more than just a telescope: it’s a time machine, a window into the beginning of the universe. It is not an exaggeration to call this fragile instrument, orbiting the sun a million miles from its home world, one of the greatest scientific achievements in human history.

Webb is an international program led by NASA with its partners ESA (European Space Agency) and CSA (Canadian Space Agency). Getting the Webb into space has been an agonizingly slow process, one with many delays, and obstacles to overcome. The project has some formidable goals: solving mysteries in our own solar system; looking beyond it to distant worlds around other stars; and penetrating the mysteries of deep space, looking back in time and across space more than 13 billion years, almost as far back as the beginning of the universe.

When the first set of full-color, high resolution images and spectroscopic data from the telescope was released earlier this month, it was clear that Webb has the potential to deliver everything promised and potentially much more.

“These images, including the deepest infrared view of our universe that has ever been taken, show us how Webb will help to uncover the answers to questions we don’t even yet know to ask,” Nelson said. “Questions that will help us better understand our universe and humanity’s place within it.”

The image titled “Cosmic Cliffs” was released to showcase Webb’s ability to see through dense clouds of cosmic dust. Revealing, in this case, new insights into how stars form. Those “cliffs” are the edge of the giant, gaseous “cavity” within NGC 3324, a star nursery located at the edge of the Carina Nebula, 7,600 light-years away. This is a place we could previously only dream of seeing.

The deep space image with all of the galaxies in it was released as an example of gravitational lensing—a phenomenon that occurs when the gravity of something massive warps space, creating a fisheye lens effect that appears to distort and magnify anything behind it—in this case, the lens effect is created by galaxy cluster SMACS J0723, with around 100 trillion times the mass of our sun. This image has already rocked the scientific community, revealing that the early universe had 10 times the number of spiral galaxies (like our own Milky Way) than previously known.

Webb also has the ability to collect detailed spectrographic data. The instruments are so sensitive that they can detect the presence of specific gas molecules based on the colors present in the light emitted from distant worlds and the suns they orbit.

Data from the spectrum of light obtained from Webb’s initial exoplanet target—WASP-96 b, a gas giant 1,150 light-years away in the southern-sky constellation Phoenix—reveals the distinct signature of H2O, water. This planet, with what we now know is a hazy, humid atmosphere, is one of 5,000 confirmed exoplanets in the Milky Way. Webb will help researchers determine whether any of these alien worlds so far from our own solar system have the potential to sustain life. It may even enable researchers to determine the ratio of seas to land, assuming some of those planets have rocky cores and liquid oceans like our own. The instruments are so sensitive that there may be the potential to determine differences between winter and summer, identify weather patterns, and perhaps even detect the presence of vegetation.

Webb will also capture spectrographic data on some of the planets in our own solar system. Analyzing organics in the atmosphere of Mars could finally answer the question of whether there was ever life on our sister planet, and provide insight into how life evolved on our own planet.

When John F. Kennedy declared that the U.S. would venture into space for the first time, he stated there was knowledge to gain. Just sixty years later, the James Webb Space Telescope has the capacity not only to show us other worlds, but to open a window into the beginning of the universe. Knowledge beyond imagination.

“We take dreams and turn them into reality for the benefit of humanity,” Nelson said. “I can’t wait to see the discoveries that we uncover – the team is just getting started!”