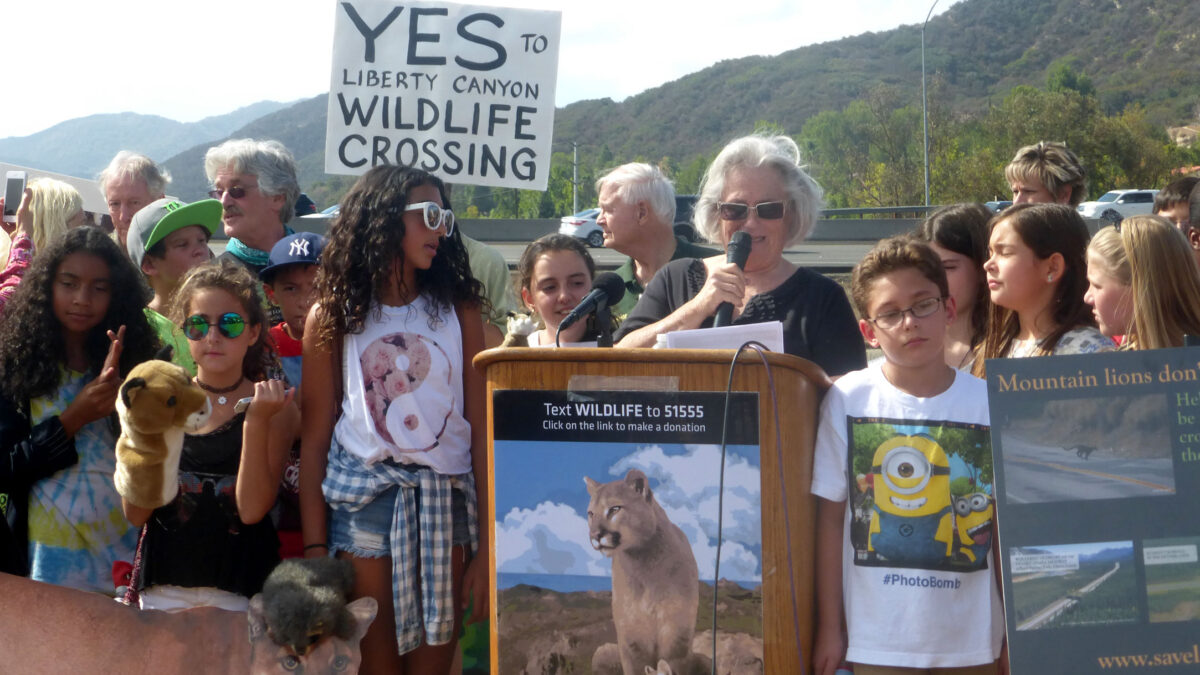 The Liberty Canyon wildlife overcrossing was one of Sara Wan’s last major campaigns. She continued to advocate for it right to the end. This photo is from 2015, during the final, successful push to get the project approved. Photos by Suzanne Guldimann
Changemakers

Former Coastal Commissioner and lifelong conservation activist Sara Wan has died. She was 83. Whenever and wherever there was a conservation or environmental issue on the California coast, Sara Wan was there. She fought to protect beaches and mountains, whales and trees, mountain lions and butterflies, public easements and public access. She was a driving force in the successful preservation of whole swaths of the coast ranges, including critically important sections of the Santa Monica Mountains, and she was active in conservation right to the end.

Sara met her husband Larry Wan while attending Yale University. She had a masters in zoology, and would later go on to get a masters in electrical engineering. Her husband had a PhD in engineering. The couple moved to California on their honeymoon. Larry had been recruited to help found the school of engineering at UC Santa Barbara.

Larry was already a lifelong conservationist when they met. Sara often said that she learned her love of the environment and the importance of preserving it on that trip, which included visits to the major Western National Parks on the way to California.

The Wans moved to Malibu in the early 1980s, and the couple plunged headfirst into the fight to incorporate Malibu as an independent city and preserve and protect the coast and the newly created Santa Monica Mountains National Recreation Area.

Larry was one of the newly incorporated city of Malibu’s first elected city council members when voters approved incorporation in 1990. While he was campaigning for cityhood and city council, Sara was serving as the vice chair of the Malibu Township Council, the citizens group founded in 1947 that was the only organized defense against a county board of supervisors that wanted to make the small coastal town into a metropolis of more that 300,000.

It was a formidable battle. Sara described the last-minute push for development permits as “a land rush like never before.” Major players tried to force through big developments before Malibu could break away from county control. Those projects included an entire small city of shops and condos in Lower Topanga Canyon, a high-rise hotel in the Malibu Civic Center area, and two full-fledged country clubs, complete with golf course and exclusive housing developments. Sara was part of the opposition. “As these projects go, so goes the future of Malibu,” Sara told the Los Angeles Times in 1990.

“Not many people remember, but Sara helped save Corral Canyon in Malibu from becoming a country club,” Frank said.

Comedian-turned-developer Bob Hope purchased 339 acres in the unspoiled canyon in the 1980s, and planned a luxury home development with a golf course and 48 homes. The plan called for almost completely filling the canyon with a staggering six million cubic yards of fill, placed right on top of an earthquake fault so potentially dangerous that it had derailed all previous development in the area, including a nuclear power plant a decade earlier.

Sara, not yet on the Coastal Commission, traveled up and down the state with her husband, lobbying each commissioner and arguing against the project.

The commission denied the development permit. A decade later, the canyon was acquired for open space. Today, the trail that winds through the canyon and up the coastal slope bears Sara’s name. It’s a well-earned honor.

Sara described it as “A terrible project” and fought to stop it.

Unlike Bob Hope’s development, this project received Coastal Commission approval, but was overturned in court. Judge Barbara Lane delivered a stinging rebuke, accusing the commission of failing to protect the coastal resources entrusted to their care.

The end result was that the golf course became Charmlee Wilderness Park and was transferred from the county to the newly created city of Malibu.

“I’ll never forget that,” Frank said. “Sara always knew exactly what she was doing. She learned the ropes in Sacramento, and knew how to choose battles.

When Malibu became a city, Sara was appointed to the General Plan Task Force charged with setting the course for the newly formed municipality. She went on to become chair of the League of Coastal Protection, an environmental advocacy organization that wasn’t afraid to go up against giants, including the oil industry.

Madelyn Glickfeld is a Malibu resident who served on the Coastal Commission before Sara was appointed. She helped introduce her to the role the commission was designed to play in protecting coastal resources.

“The kind of development Sara opposed is inconceivable today,” Madelyn told me. “What Bob Hope and other developers planned was unbelievable.”

Sara was appointed to the California Coastal Commission in 1996, and was quick to make waves. She had an encyclopedic knowledge of California’s environmental laws and coastal development history, and she didn’t suffer fools gladly.

Sara was a powerful voice for conservation and public access on the Coastal Commission. Her blunt speaking often ruffled feathers but it also got results. She described plans for a new golf course in Pebble Beach on the Central Coast that would have required clear-cutting 15,000 Monterey pine trees in the Del Monte Forest as, “wholesale destruction,” and “the most egregious example of development trying to circumvent the Coastal Act” that she had seen in 20 years of attending meetings.

She blasted the Foothill-Eastern transportation agency’s environmental review for a toll road across San Onofre Beach in San Clemente.

“It’s faulty science,” she said. She was proven right.

The biggest environmental victory she was involved in on the Commission was Hearst Ranch. The 82,000-acre undeveloped swath of coastline surrounding Hearst Castle on the Central Coast was slated for massive development in 1998. It was a multi-year battle, but the Commission put an end to the project at a hearing that drew conservation activists from all over the state and packed the meeting venue. Sara was vice chair at the time.

During her tenure on the Coastal Commission, Sara challenged developers and her fellow commissioners on CEQA—the California Environmental Quality Act—and on the provisions of the Coastal Act. She challenged state and federal officials on protections for marine mammals, oil drilling and open space. She challenged property owners over public access. No issue was too big or too small.

When Broad Beach property owners in Malibu hired security guards to keep the public off the beach, she packed a picnic and held a one-person sit-in, armed with all the documentation showing that the beach was public, not private. When a Malibu commercial property owner cut down trees housing a colony of black-crowned night herons, Sara documented the dead and dying birds and insisted on action being taken to protect the colony. When the issues of whale hunting and offshore oil drilling were reopened by the federal government, Sara was there, speaking out against environmentally damaging policy.

Sara served on the Coastal Commission for 15 years, weathering several efforts to unseat her. She finally lost her seat in 2011, but she didn’t let that slow her down. She served on the board of the Santa Monica Mountains Conservancy and the Santa Monica Bay Restoration Commission. She established the Organization of Regional Coastal Activists (ORCA) to help train the next generation of activists, and she lent her support to big and small conservation projects, from the Liberty Wildlife Crossing over the 101 freeway, to the Malibu Monarch Project.

Sara  and her husband, who is a world class wildlife photographer in addition to being a conservationist, co-founded the Western Alliance for Nature land conservancy. It’s a lasting legacy for the couple’s commitment to conservation.

“She was an incredible human being,” local conservation activist Patt Healy told me. “She was always there to help, and she always knew what she was doing. It’s a great loss to the planet. Earth needs people like her.”