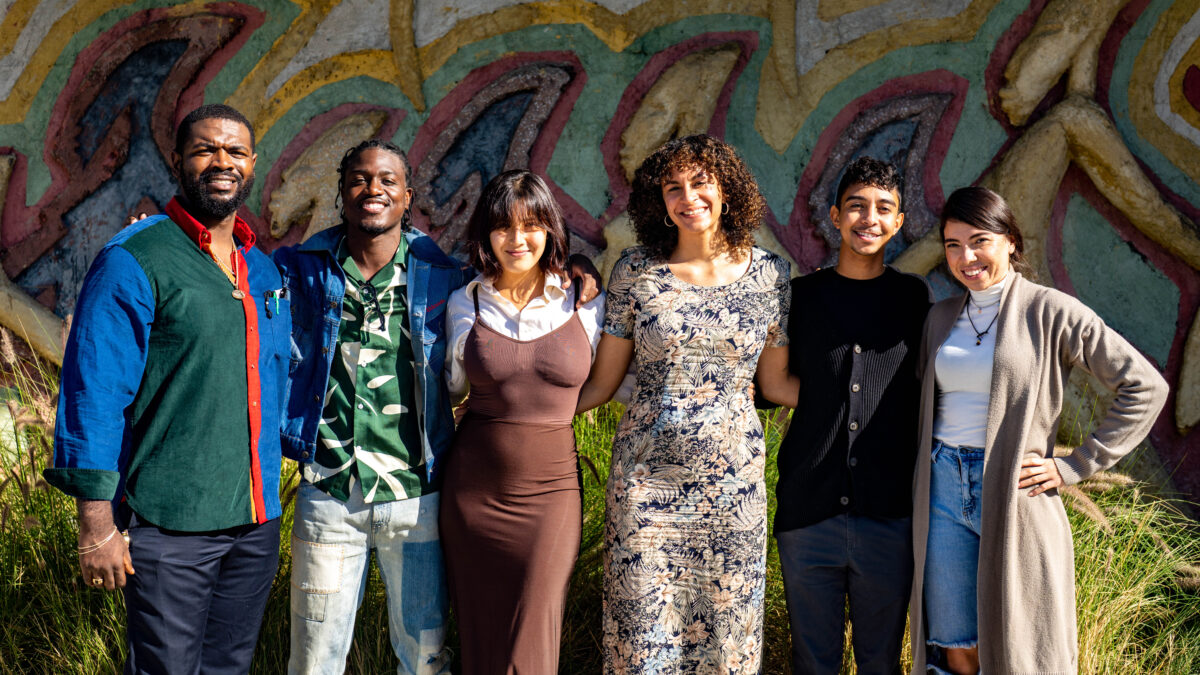 Environmental issues aren’t just a concern in wildland areas. Residents of Watts are grappling with a legacy of industrial pollution and water contamination that is part of the grim history of racial injustice in Los Angeles, but there’s hope for a better, safer future. The Watts Labor Community Action Center is bringing together a team of young environmental scientists and activists who are mapping the problem and working to find solutions.

The  temporary exhibit opened to the public with the aim of bringing attention to the decades long water crisis affecting Watts residents. More than 40 artists participated in the show, which cumulatively raised over $100,000.

The Watts Labor Community Action Center is a family tree of hope within Watts that was started by Timothy Watkins Sr. and his wife Janine Watkins. Timothy launched the Better Watts Initiative with partners that include the Black Community Health Task Force and Physicians for Social Responsibility LA. Since 2016, students and professors from six different universities have come together to address community needs with emphasis on environmental justice.

Last week I met with Janine Watkins and some of BWI’s PhD students, professors and volunteers at WLCAC to talk about the ongoing issue of environmental contaminants in the soil and water in the community. Janine’s work in Watts spans decades, “She does it all!”, the students say. She’s done everything from host community picnics to raising millions of dollars for the community to help students of color thrive.

Preliminary soil samples collected in Watts show average levels of lead that exceed California limits for residential homes and housing developments. In addition, 20 percent of the water tested had high levels of  lead and other contaminants. Exposure to lead at a young age can lead to difficulty sitting still, listening, learning as well as developing impulse control, resulting in high rates of ADHD diagnoses in LAUSD schools.

“Right now we have two projects in Watts who say they are sustainable but they’re not going to do an environmental impact report,” Janine said. “How can you say you’re sustainable without a report confirming that you are? The only plan we’ve ever had that was a community plan for Watts was in 1966. We’re still gerrymandered and red-lined. We’ve been in compromise ever since. We’re fighting to retain our public land. It is seemingly being handed over to private developers to make money in perpetuity, compromising the environment.”

“I came on the project as creative director and strategist, unlike some of my peers I’m not PhD,” shares Tanika Vickers. ”When Mrs. Watkins said, ‘There are people walking around who are poisoned and don’t know…’ It took my heart.” Tanika explained that the exhibition was important to establishing BWI as a non-profit and resource to the community.

Danielle Hogue is a third year PhD student at UCLA. She directs and guides the policy initiatives for BWI. “It’s the first thing I think of when I wake up in the morning,” she said. “How to make sure we follow through on commitments made to the community. The community members here are so strong and so resilient but they don’t always have the same access that we do at our universities. As students we are responsible for where we come from. You rarely see students of color come together and it’s a really powerful way to build trust.”

“We get our water from three places,” said Malcolm Jones, a PhD Student at the Clinical Exercise Research Center Division of Biokinesiology & Physical Therapy at USC. “It’s imported by aqueducts from the Colorado River into LA aqueducts, and there are six different wells here in Watts. Just as we sit in the room and breathe, our water breathes and if it’s living in a toxic environment, it absorbs that.

Benzene, methane, arsenic, that’s what is in the ground water. Pipes must be up to the standard.” In closing his remarks in a recent Town Hall he shared that BWI had recently been told, “just because the water looks dirty, it’s still safe to drink.”

Malcolm is a natural leader in the group. “I was just here as a physiologist trying to make sure we were following covid protocols to get people to vote. I thought to myself, I’m not an environmental scientist but we could find the students and professors we needed. I am passionate about getting done what Mr. Watkins has spent his entire life dedicated to.”

“I am here to find out how I can be a resource or an asset,” shares Ernest Johnson who was attending his first meeting with BWI on the day of our visit. “My goal is environmental equity. I went to school in New Orleans, have family in Flint, Senegal and Haiti. I understand the aspects of how certain communities are historically vulnerable.” Johnson studies urban planning and is an aspiring dual degree JD student at UCLA.

Students like Elijah Catalan got involved at BWI last year. Elijah is a recent graduate of Howard University, and a PhD student at UCLA. “I wanted to do work that would benefit the greater community that I would be studying in,” he said. “One way that I’m involved is I help write manuscripts and do research for those environmental concerns.” As a budding scientist the work provides experience and opportunities in scientific publications.

Megan Wong, an undergraduate student at USC has worked with BWI a little over a year, and has a background in environmental studies. As an environmental science intern. “During the last semester of my senior year I started learning about the socio-environmental political problems in Watts,” Megan explained. “Now I am employed at the WLCAC as the volunteer coordinator. I have my hand in environmental research as well as coordinating volunteers.”

In a virtual Zoom meeting, I met with Dr. Elena Miranda, a professor of Geology at California State University Northridge. “I like to meld geo-science knowledge as a context for understanding environmental contamination,” she told me. “I am particularly interested in environmental justice work in LA. Most of the students at California State University are from LA. They grew up here so it’s relevant to their community.”

While working with an undergraduate student who knew about a lot of contaminated projects in Watts, they connected with WLCAC and BWI initiatives.

“It’s not that common in the field of geology. It was eye opening for those students and is excellent training for scientists to communicate to the public. Bringing more people to the effort is how I’ve gotten involved. It’s art, it’s science, it’s activism, it’s restoration, it’s justice, its politics, its policy, it’s all of those things together.”

For more information go to www.betterwatts.org