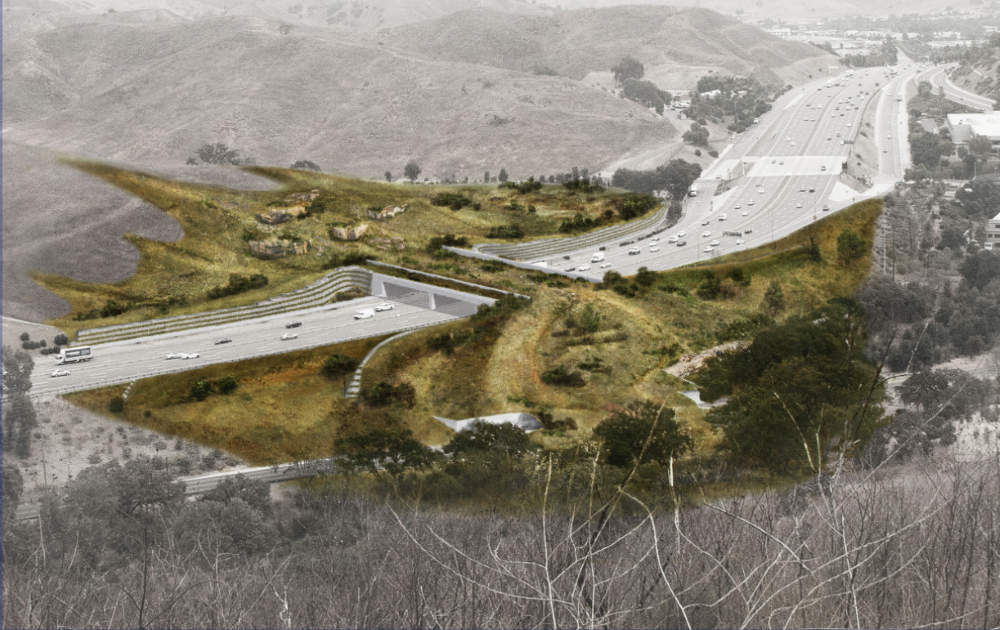 The Wallis Annenberg Wildlife Crossing at Liberty Canyon will be breaking ground soon. This project, which will bridge an eight lane freeway and two side roads, is the biggest and most ambitious wildlife crossing ever planned. It has reached the point where it will become a reality through the combined eorts of public agencies, private individuals and non profit organizations. The research that revealed the need for this crossing is also inspiring other projects, as close as Ventura County, and as far away as Oregon. Image: Annenberg Foundation
Changemakers

Our theme this year at Topanga New Times is “changemakers,” but this issue’s change maker isn’t a person or even a project, it’s an important part of a new movement, one that recognizes that nature has rights, including the right to safely travel across the roads that increasingly fragment their remaining habitat.

The Wallis Annenberg Wildlife Crossing at Liberty Canyon in Agoura Hills is the most ambitious practical application of this philosophy. The start date for the project is imminent—it’s expected to be announced by the end of this month.

The overpass will span 10 lanes of traffic. It will provide a fully vegetated natural landscape for wildlife to safely cross one of the busiest freeways in the nation. For species like mountain lions and bobcats, this bridge will mean the difference between extinction and survival.

The innovative public-private partnership created to fund and build this bridge includes Caltrans, the National Park Service, the Santa Monica Mountains Conservancy, Mountains Recreation and Conservation Authority, Resource Conservation District of the Santa Monica Mountains, and the National Wildlife Federation. The project has brought together the expertise, leadership and fundraising power and philanthropy of numerous organizations, institutions and individuals.

It’s a mirror of the Santa Monica Mountains National Recreation Area, which is itself a collaboration between federal, state and local park agencies and nonprofits, and like the national park where this bridge will be located, the project is moving forward against almost impossible odds.

When this section of the 101 was built in the 1960s, it created an almost impenetrable barrier between the Santa Monica Mountains and the wider network of mountains that ring the Los Angeles Basin and valleys, turning the range into an isolated island of habitat.

In just the 60 years since the eight-lane freeway through Calabasas and Agoura Hills was completed, mountain lions have experienced a genetic bottleneck that is now causing the very real potential for this apex species to die out within as little as a decade. Extensive research conducted by NPS biologists has  found that, without an escape route for young animals to disperse and for adults with new genetic material to be introduced, the species cannot survive. And mountain lions aren’t the only native wildlife impacted by genetic isolation: bobcats, gray foxes, coyotes, and mule deer also need a large range and connected habitats in order to breed and thrive.

The Liberty Canyon crossing project has had a high profile ambassador in the form of P-22, the Santa Monica Mountains mountain lion who, in 2012, successfully traveled across multiple freeways and some of the densest urban development in the county to reach the safety of Griffith Park.

“We are [building this crossing to] prevent the extinction of species,” Beth said at a March 21 Zoom talk hosted by California Natural Resources Secretary Wade Crowfoot.

“We are reconnecting the Santa Monica mountains to the rest of the world,” Beth said.

Liberty Canyon was chosen because it is one of just two places with public open space on both sides of the 101. Now, a second wildlife crossing may be on the horizon, at the only other location that meets that criteria—the Conejo Grade in Newbury Park.

Journalist Dawn Megli reported in the February 25 issue of the Camarillo Acorn that the Ventura County Transportation Commission, Caltrans and the National Park Service are working together on the project with support from the National Wildlife Federation.

“The new wildlife bridge coincides with tentative plans to add a carpool lane in each direction of the 101 Freeway between Moorpark Road in Thousand Oaks and state Route 33 in Ventura,” Megli wrote.

The proposed bridge would be narrower and less costly than the Liberty Canyon crossing, and the plan is to seek government funding, or to earmark funds from a proposed transportation tax that is expected to be on the ballot for Ventura County voters in November.

Over the past decade, a joint Caltrans and National Park Service project has helped to improve wildlife safety and connectivity on a 12-mile stretch of the 118 freeway.

Caltrans has cleared and retrofitted five culverts under the 118 freeway and installed fencing to direct animals to the underpasses and away from traffic on the two-lane stretch of the state highway.

The NPS researchers have thoroughly documented the ways wildlife of all kinds make use of any safe route under or over a road, however precarious. The retrofit project removed hazards and provided safe and more direct routes for animals to travel.

The NPS study that would eventually set the Liberty Canyon project and the underpass retrofits into motion was published in 2003 in the journal Biological Conservation. That study, which was co-authored by NPS biologist Seth Riley, who wrote that a variety of structures, even if not originally designed for wildlife, can be important parts of regional conservation strategies.

There are other retrofits under development, Culvert improvements to allow the critically endangered steelhead trout to cross under Pacific Coast Highway into Solstice Creek has been under development for years and is expected to be built later this year.

It may be almost too late for the local steelhead, but there is still hope for the mountain lions of the Santa Monica Mountains, and as this project moves forward, it continues to inspire more projects, more connectivity, more awareness of wildlife and how important it is to protect and connect it.

“People have rallied around the mountain lions,” Beth Pratt said. “They have seen firsthand the impact of roads on wildlife, and people all over the world have gotten involved.”

The official groundbreaking date for the Wallis Annenberg Wildlife Crossing at Liberty Canyon will be announced on March 24, after TNT goes to press, but Beth hinted that it will be in late April. “I’m a bit dizzy after working on it for 10 years,” she said. “We are going to do this. We are about to break ground.”

April is #ConnectedConservation month. For more information and to get involved visit www.savelacougars.org

The Frequency of Love