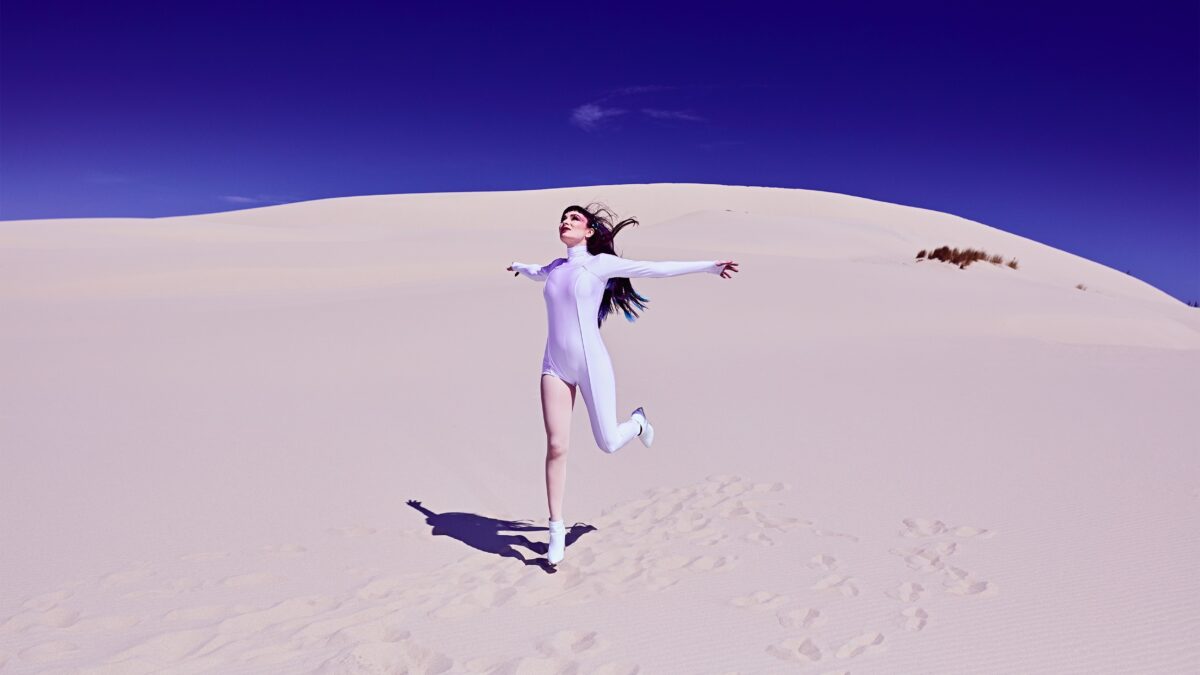 Homeworld, the first album by Flight Call—singer songwriter Tai Woodville and her husband, synthesizer wizard and music producer Johann Wagner—is fun and inspiring, with a space rock vibe and an optimistic, upbeat feel. This is a passion project for its creators. Photo by Andy Batt
Changemakers

when we were stars,

Imagine a place of perfect peace and tranquility, full of light and crystalline beauty. That is the vision that singer-songwriter and performance artist Tai Woodville has conjured for Homeworld, a concept album that is part space rock, part new age electronica and part performance art piece. Tai describes it as “meditative art-pop,” but that description is only part of this multilayered project.

Homeworld, the first album for Flight Call, features 10 songs composed and performed by Tai. Her husband, modular synthesizer wizard Johann Wagner, produced and performed the electronics on the album. The music has a bright, ethereal sound—celestial synths and vintage drum machines grounded by Tai’s smooth, warm vocals. The album is the core of a multi-year conceptual art project, one that is uniquely rooted in the Santa Monica Mountains, where Tai grew up.

Tai is the daughter of the late actors Edward Albert and Kate Woodville. She grew up on a horse ranch overlooking Escondido Beach in Malibu. It was a lonely childhood. She was an only child, and her parents selected schools with a focus on creativity that meant a long commute and no friends in the neighborhood, but it was a life with love, beauty and kindness, and space for almost unlimited creativity, qualities Tai still values and embraces.

“For the album, I created a fantasy being I could inhabit,” Tai explains. Her “stardust persona” is inspired in part by David Bowie’s Ziggy Stardust”—“I used him as a big brother,” Tai explains—but it has its genesis in an early memory of her father, actor and activist Edward Albert.

“When I was little he used to ask me Zen koans,” she recalls. “I didn’t know that’s what they were, they were just questions. One day he asked me, “‘Do you remember your face before you were born?’ And I reached back and did have a feeling. I knew, and it was like sunlight on water.”

That image has remained with Tai and continues to inform her work as an artist. “I’m obsessed with it in the best way,” she says. “I want to evoke that sense of the original world I’ve had since I was a kid, the homesickness for this abstract place.”

All of the elements of Homeworld, from the colors of the album art to the ideas presented in the lyrics are created to embody that feeling. “I feel like I am recollecting parts of my truest self, puzzle pieces,” Tai explains.

The opening song on the album offers the listener the artist’s “piece of the map” to that illuminated place she describes as “Homeworld.”

“There’s a Welsh word, hiereth, it means homesickness for the inaccessible, for something that is lost across time and space,” Tai says. “That is what I am zeroing in on. “

Part of that feeling is rooted in her childhood home. “I was an only child and I had a lot of alone time with animals and nature,” Tai says. “The land, the view, was beautiful. Desert magic by the sea with a tropical garden Dad poured his soul into. A parade of bright flowers, overgrown and wild. The house itself was modest, messy, chaotic. Hidden behind heaping vines and palms. You could barely see the house for the garden. “

Tai grew up among a menagerie of horses, goats, chickens, sheep, cats, dogs, lizards, turtles, and parrots. “It was a wild artist bohemian rancher house and my parents were like college roommates more than parents, sometimes, but there was a lot of love,” she says. “Art and creativity were the lifeblood of the household. Spirituality ran strong. For my dad, it was nature, Taoism, earth magic. For my mother, books. a quest for spiritual knowledge. They both appreciated art, beauty, poetry, magic. So I grew up saturated in these vivid colors of expressive people on a quest.”

That idyll ended early. Tai’s father died when she was in her early 20s. She lost her beloved grandfather the same year and spent the next decade caring for her mother, who experienced a long illness. Tai’s first band, Sugar in Wartime, dropped a successful album in 2007, but she had to put her musical career on hold. Tai and her husband, former band member Johann Wagner, moved to Oregon, where Tai cared for her mother and wrestled with her sense of loss.

“Those were dark years,” she says. “It felt like a black hole. I was numb with pain. I had lost the thread of my life. Moving to Oregon was a huge part of my healing. “

In Oregon, Tai began to experiment as a solo singer songwriter and she published her first collection of poems in 2011 “Pollen was about finding beauty in the temporary,” she says. The poetry chronicles her struggle to find acceptance in loss.

Tai’s husband Johann created Pinewave Studios at their Oregon home, a state of the art recording studio with a formidable array of cutting-edge and vintage synths, but it wasn’t until the idea for Flight Call began to crystalize that the duo began to talk about producing a new album together.

It’s great to collaborate as producers,” she says. “It can be hard to bring two visions together, but it was a smoother ride—we are older and wiser. Johann is brilliant, a brilliant musician and producer.

Johann brings depth and brilliance to the album, with multilayered and nuanced synth tracks. He also encouraged Tai to experiment on the album. “He suggested that I try composing on the OP-1, it’s a small synth that I could take outside with me. It was transformative, and opened my writing up melodically,” she says.

There is none of Sugar in Wartime’s angst in Homeworld. “That was cathartic, but I wasn’t writing from an elevated place,” Tai says. “Flight Call comes from a place of authenticity. I find myself more spiritual now. Spiritual practice and artistic commitment are my golden thread. We have to be the light we seek,” she says. “I call that the secret of life.”

This is a light, bright, optimistic album. It reflects Tai’s thoughtful and meditative philosophy but it is also fun and fantastic. “In a hard time we need escapism,” Tai says. “Joy is the food of the soul.”

Tai has led up to the release of the album with a series of performance pieces on social media, sharing the colors, shapes and messages of her imagined Homeworld, and a narrative about her stardust persona presented in a series of short videos that culminating with the release of the first full-length video for the album, “A Piece of the Map.” A second video is set to drop soon, and Tai is also working on a novel inspired by her world-building.

“It exists within the Homeworld universe, and I’m very excited to get back to that, and finish it, hopefully—I’ve been focusing on releasing the album. But the world building overlaps, which is exciting,” she says.

At the heart of everything is that memory of a lost paradise. “For me, when I think of growing up in that wooden California ranch house with the wild jungle of a garden and the ocean shimmering in the distance, I think of a kind of lost heaven. Exactly that word again ‘hiraeth’. A time and place I can never return to, but long for and feel homesickness for. I dream about the ranch so often. I’m there more than anywhere else in my dreams. It feels sun splashed and sea salted in my memory. The color of light through leaves.”

Homeworld, or as close as one can get to it in this world.

To learn more about Flight Call and to listen to Homeworld, visit www.iamflightcall.com

For more on Tai Woodville, check out her website: www.taiwoodville.com

Humor is a Funny Thing