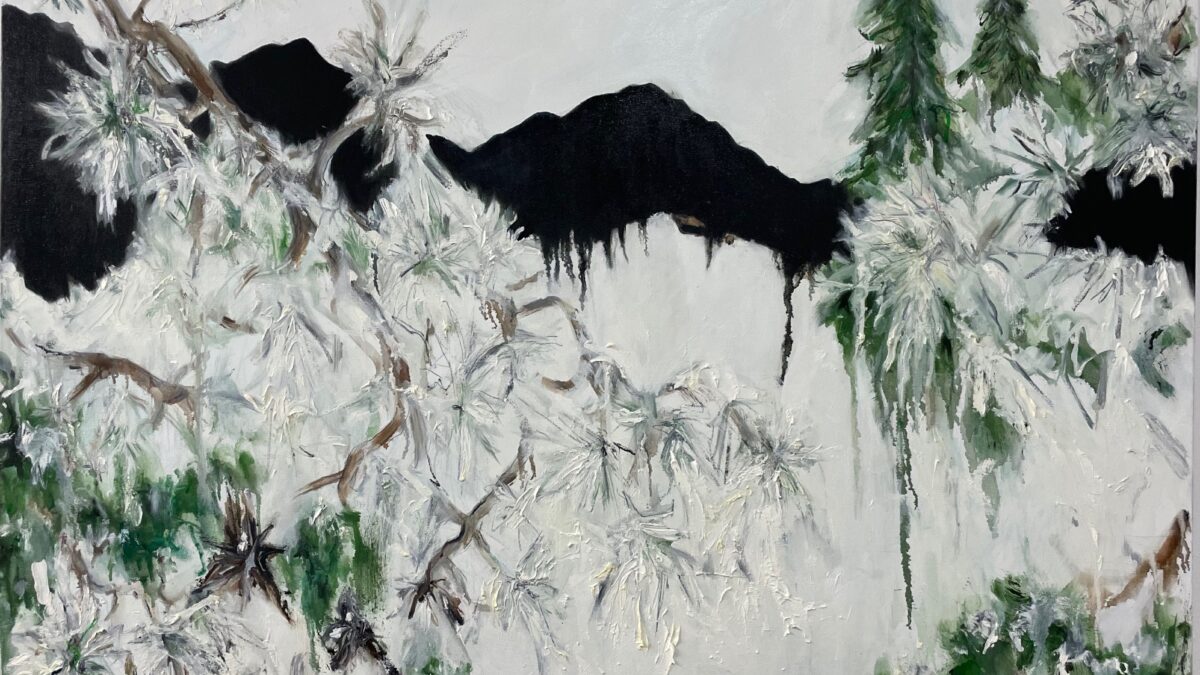 My Backyard in Winter, by Kate Browning
ArtBeat

Kate Browning and Lisa Baldwin each transport you to another state of mind with their paintings; be prepared for an experience as you see the individual bodies of work presented in both the North and South Galleries at the new gallery location, across the boulevard from Pine Tree Circle.

Presenting the first solo show in Topanga Canyon Gallery’s North Gallery, “Kate Browning Now (little things matter)”, Kate Browning embeds her concerns regarding nature and current social issues in her new work.  She states, “My intention is constructing works which are interpretive metaphors of what initially inspires me”.

Ms. Browning received a Bachelor of fine arts from Otis College of Fine Arts in 1993 and has since created a consistently evolving body of work which is shown in galleries throughout Los Angeles.

This present work was stimulated by a commentary about Mussolini’s metaphor on the achievement of absolute power……that of the plucking slowly of a chicken, one feather at a time, so that each is undetected by the other until the end. She explains that she “rifted on this idea and expanded it into my concerns of an outcome both positive and negative.”

Ms. Browning notes that often a viewer can go beyond the surface of the image itself, and find something intangible beyond. She says “I am fascinated how materials can unexpectedly move across a surface both in abstract and representational images dripping and creating multilayered and unpredictable strokes.”

“Resonance” is Lisa Baldwin’s first solo exhibition in the Gallery’s new space and her first as Creative Director. She is a contemporary plein air oil painter who creates work that weaves conceptual themes into a framework that celebrates the diverse beauty of the natural world.

Focused on the awareness of perception, Ms. Baldwin presents a body of work that enlarges plein air oil sketches into large scale paintings of moving water. Her intention is to filter reality through her senses and convey that moment of consciousness onto her canvas. She seeks through the gesture of her brush strokes to capture the essential character of this moving subject into its most distilled form like a visual haiku. She explains: “Plein air painting encourages speed in execution, loose brushwork, and inspires colors beyond your imagining while confined to a studio setting. My goal as always is to never loose site of the energy and spontaneity that painting outside inspires.”

Ms. Baldwin is a Canadian artist from South Eastern Quebec who moved to the Los Angeles area about 6 years ago. She has always been an outdoors woman and her work is influenced by the work of Tom Thomson and the Canadian Group of Seven.  Like the group of seven, she paints smaller oil sketches en plein air and reinterprets them on a much larger scale at her home studio.

Topanga Canyon Gallery has recently moved to 137 S Topanga Canyon Blvd.  Please join us at our outdoor reception November 13th from 4pm – 7pm, and enjoy the simultaneous shows in our North and South galleries.