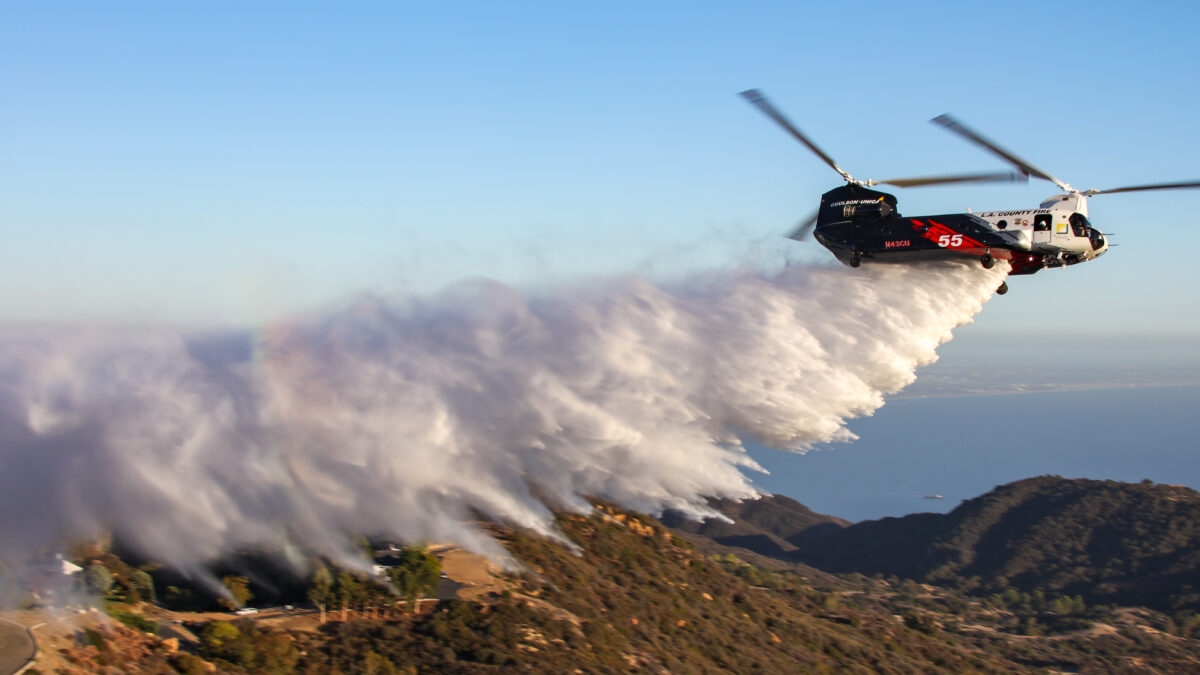 On November 8, 2018, a fire ignited, sparked by power lines at the old Santa Susana Field Laboratory in the Simi Hills.
Discover

A conversation with the folks that fight our fires about what’s keeping them up at night.

On November 8, 2018, a fire ignited, sparked by power lines at the old Santa Susana Field Laboratory in the Simi Hills. Less than 24 hours later, the Woolsey Fire had burned all the way to the ocean in Malibu, consuming 96,949 acres, scorching nearly half of the Santa Monica Mountains National Recreation Area, destroying 1,643 structures, and killing three people. Three years later, many residents of the burn zone are still grappling with the challenges of rebuilding and post traumatic stress.

Imagine if a disaster like the Woolsey Fire could be averted, extinguished before it grew to be more than a few acres? Los Angeles County has two new resources that may finally make that possible.

One of those resources is 69 Bravo, the fully-automated heliport on a mountaintop above Topanga that features all of the equipment needed to enable firefighting helicopters to safely and quickly fill their tanks with water without having to land. Built by a concerned Topanga resident, the heliport is now officially owned by the county, and provides 24-hour, year-round support for firefighting helicopters, including four self-filling 8,000-gallon water tanks, and a fully automated system that can be activated by an app.

Each of the helicopters has the capacity to deliver 3000 gallons of water or fire retardant at a time, on par with some fixed-wing air tankers. But unlike most firefighting aircraft, these four airships can operate day and night, flying in conditions that would ground a fixed-wing craft. And they can refill in less than two minutes from almost any water source, while hovering.

The QRF operates as a package, one that comes not only with the aircraft, but with everything needed: pilots, pit crew, technicians and mechanics, and even parts and tools. Each county is responsible for and holds the contract for specific assets, all the counties can call on the resources, splitting the cost and management responsibilities, but receiving the full benefit of the program.

The program is in place during peak fire season. The QRF is released to other parts of the world when winter arrives. The team is led by Craig Lapsley, a 30 year veteran of emergency management in Australia, where he was Victoria’s first and only Fire Services Commissioner and the inaugural Emergency Management Commissioner. He’s currently Director Of Flight Operations for Coulson Aviation.

“Our goal [with QRF] is to keep small fires small,” Lapsley told the Topanga New Times. “The only way of preventing a fire like Woolsey is to stop it before it spreads,” he added.

Lapsley explained that big helitankers are usually called in after a fire is out of control. “Putting them on initial attack is new,” he said. “It’s proved itself extremely effective.”

“The knockdown power of multiple night-capable helitankers working together is a game-changer. It’s a capability that has never before been available.

Mel Ceccanti is the chief pilot for the program and flies one of the massive and fast Chinooks—it’s the largest helitanker currently in existence and it can travel at up to 200 mph.

“It’s cumbersome but maneuverable,” he said. “That’s a lot of weight, a lot of momentum.” The speed and maneuverability enabled Ceccanti to drop an impressive 47,000 gallons of water in less than three hours on the Silverado Fire in Orange County earlier this year.

Topanga residents had an opportunity to see Ceccanti and his Chinook in action at the Tuna Fire earlier this year. “The Tuna Fire had all of the ingredients for a disaster: dry fuels, high temperatures,” he said. “We were able to hold it to the ridge.”

“It’s absolutely incredible. To have a resource like that is phenomenal. The four tanks mean we can refill at the same time. We don’t have to hover and wait.”

Ceccanti started out in Search and Rescue in his native Washington State. “I hated helicopter rides at first,” he said. But he quickly realized the value of flight experience for search and rescue and overcame his dislike. He signed up for a class at a local flight school and soon developed a passion for firefighting aircraft, especially the large helitankers he now pilots. Ceccanti and his QRF team fight fires all over the world. It’s a grueling schedule. The team members work 14 hour days in 12 day shifts, and then get 12 days off. For Mel, that means flying home to his family in Washington State. “I get to go home to my family for 12 days and decompress,” he said.

While the QRF is stationed in Southern California during our official California fire season they can be sent anywhere at any time in response to mutual aid requests, and they have to be ready to go at a moment’s notice.

Ceccanti explained that he doesn’t mind. His whole crew, he said, is committed to firefighting. “Not everyone has the opportunity to stop a disaster before it happens,” he said. But that’s what we’re here to do.”

In December, when fire risk in Southern California diminishes, the QRF will be headed to Chile and Australia, where fire season is just getting underway, but they’ll be back in the summer of 2022.

“We want people to know we are here,” Ceccanti said. “We want them to know the capability we bring, it’s something we haven’t had before.”

The scars of the Woolsey Fire are slow to heal, and longtime residents can remember the feelings of helplessness that come when fire rages through the mountains, an unstoppable force. The promise of a future without another wide scale wildfire seems too good to be true, but maybe, just maybe, with the help of 69 Bravo and a quartet of giant helitankers, that future is in reach.

A Forest Takes a Lifetime of Care