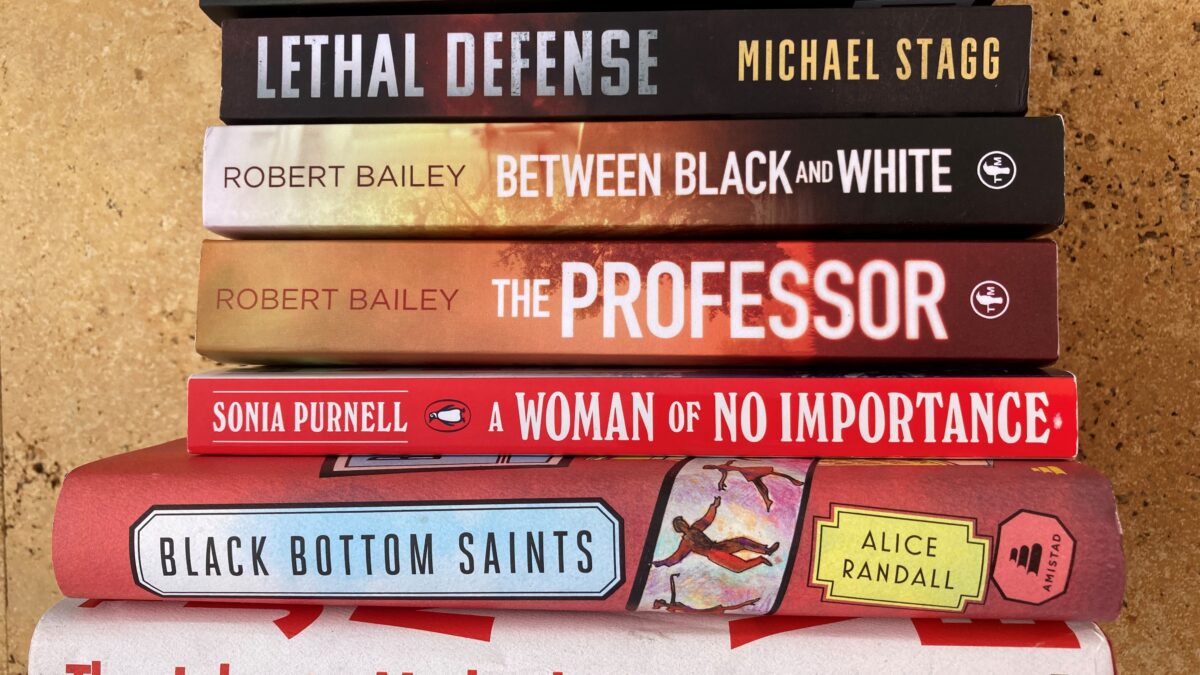 The Gift of Reading

I like to read. Typically, I am engaged with several books at a time. Here are a few that I am living with now and a few more sitting over there on the shelf awaiting my attention.

As many of you know, I spent some time with espionage histories this year. A friend of mine noticed that all the authors and primary characters of the books I reviewed were of the male species. So, after a few jokes about testosterone, and in an appeal to consider my gender bias, she recommended A Woman of No Importance: The Untold Story of the American Spy Who Helped Win World War II (2019) by British journalist Sonia Purnell.

The “woman of no importance” in the title is one-legged British intelligence officer Virginia Hall (I think Hall will forgive the highlighting of her disability given that she named her prosthetic leg Cuthbert; a peculiarity that offers insight into the motivations of this courageous woman).

In 1940, Hall began her career as a spy in Vichy France – an ostensibly neutral territory that was actually under the rule of a Hitler puppet. Before the United States entered the war, Hall’s American citizenship worked in her favor as she organized a secret network of connections and resources that eventually facilitated the Allied invasion of Europe in 1944. This is excellent spy thriller stuff made all the more enticing because it is grounded in history and backed up by solid archival research within a trove of recently released documents.

In 1965 Indonesia, the US government was complicit in the eradication of “approximately one million innocent [Indonesian] civilians.” This large-scale massacre is an extreme example that illustrates the broader, largely clandestine, approach of America’s decades-long effort to put down communism. This is not a pretty story, and it is often not easy to reconcile our love of country with the atrocities such as this that have been committed on our behalf. This is all-the-more reason to spend some time with it. Because, in my view, if we look away when things become unpleasant, we have then become part of the problem.

Despite a great deal of evidence to the contrary, this not-so-famous historian also enjoys fiction. Although I must confess that I prefer fiction grounded in history; or fiction as commentary on social, cultural, and political issues. Indeed, I credit my interest in history and my career as a history instructor to the historical fiction of James Michener, starting with his Hawaii, a 1975 gift from my English teacher at Malibu Park Junior High School.

I have thoroughly enjoyed the first two books, Lethal Defense and True Intent. Books 3 and 4 are on the shelf and number 5 is due out in 2022.

In that same genre, Robert Bailey’s Thomas Jackson McMurtrie and Richard Drake must settle an old score before working together to go after the bad guys.

McMurtrie is a law school professor “who literally wrote the book on evidence in the state of Alabama.” Drake is a former student and attorney who has only recently hung up his shingle. The Southern locale gives the McMurtrie and Drake Legal Thriller series a comfortable Grisham feel to these hard-to-put-down books.

In Book 1, The Professor, McMurtrie must decide between doing the right thing or doing the wise and safe thing: a recurring theme through three other tales. A spinoff character, Bocephus Haynes, stars in two additional books written in 2020 and 2021.

McMurtrie and Haynes are former football players who were coached by the iconic Bear Bryant at the University of Alabama, although from completely different generations. Bryant is a mentor whose inspiration drives our primary characters to seek justice over fame or fortune. The famous coach also makes a few cameo appearances.

My final book on the shelf comes with a story.

I joined Facebook while I was working on my Master’s thesis in American History – “Ghetto Nation: Black Power and the Detroit Rebellion of 1967.” The result is that my feed is populated by quite a few characters acquainted with the Detroiters I interviewed for the project – including more than one avowed Marxist. One of these personalities – not a Marxist but, rather, an ambassador for her beloved city – is Marsha Battle Philpot, AKA Marsha Music. Her father, Joe Battle, owned Joe’s Record Shop on Twelfth Street which served as a meeting place for the community. Speakers deployed on the sidewalk belted out the Blues and the sermons of C.L. Franklin which were recorded by Joe himself. Franklin’s daughter Aretha might be familiar to you.*

This is my long way of saying that I put a great deal of faith in Marsha’s take on things Detroit and she has heartily recommended Black Bottom Saints (2020) by New York Times bestselling novelist Alice Randall. Black Bottom was a thriving black neighborhood in Detroit before it was largely razed in the spirit of urban renewal – which locals often referred to as “Negro removal.” Randall’s book is a novel set in this hopping neighborhood before the freeway came through. The “Saints” include boxer Joe Louis, crooner Nat “King” Cole, and a slew of colorful local characters, artists, and performers. It looks to be a good one.

Let me know if any of these ideas make your gift list this holiday season. I would love to hear from you.

Giving to the World