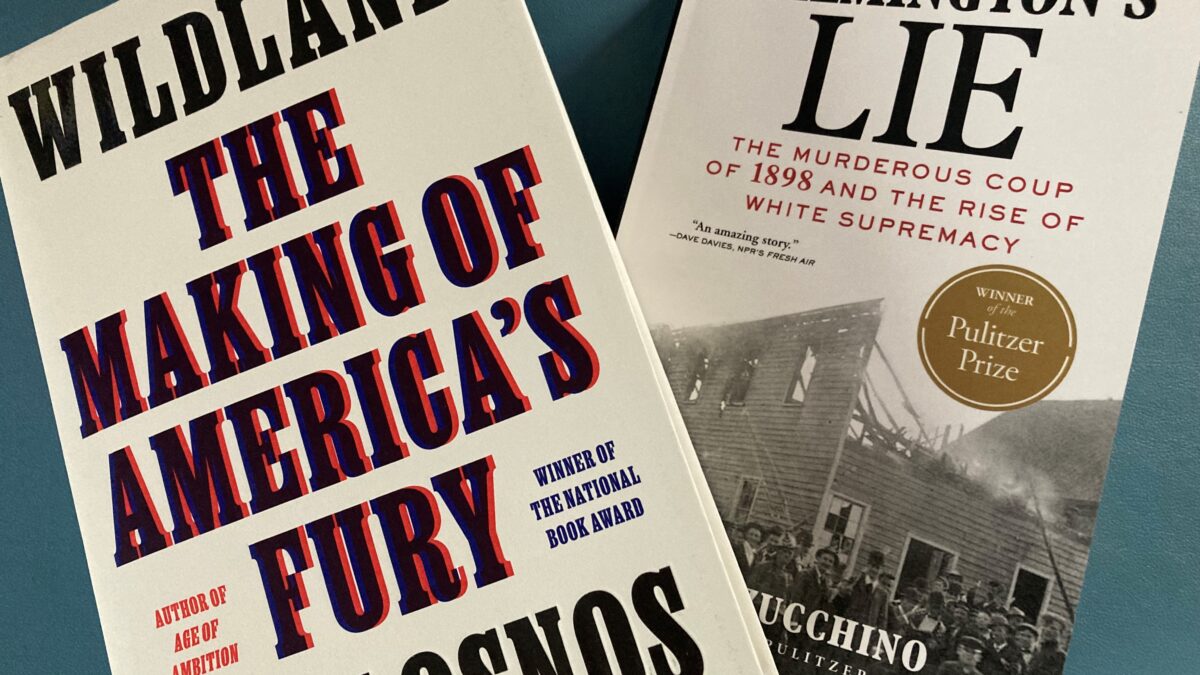 A history of the nineteenth century and another of the twenty-first, both inform the age in which we live.

In Wilmington’s Lie: The Murderous Coup of 1898 and the Rise of White Supremacy (2020), Pulitzer Prize winner David Zucchino illuminates history’s power to challenge the lies we are told.

A full generation after the American Civil War, the young men who defended the Confederacy in the 1860s grew up within a society transformed by the emancipation of some four million former slaves. In Wilmington, North Carolina – perhaps more than any other Southern locale – a thriving mixed-race community hinted at the possibility of American racial harmony.

Blacks were represented in local government and served in law enforcement and fire prevention. Others prospered in business while workers made wages that could comfortably sustain a family. In several instances, blacks and whites lived together as neighbors.

Threatened by the handful of blacks who had moved into a few positions of economic and political power, and obsessed with the implausible notion of “Negro domination,” white supremacists in Wilmington engaged in a months-long public campaign to incite whites and terrorize blacks in the lead up to local elections in November 1898.

With strong implications informing current efforts to suppress the black vote, whites in Wilmington engaged in a brazenly open crusade extolling the virtues of white supremacy while stoking fears of a “black rebellion.”

On the eve of the election, a Confederate veteran known as Colonel Waddell urged a throng of cheering and heavily armed men to “[b]e ready at a moment’s notice. Go to the polls tomorrow and if you find the negro out voting, tell him to leave the polls. And if he refuses, kill him! Shoot him down in his tracks!”

Two days after staging a thoroughly corrupt election, and under the preposterous pretense of preventing black violence, scores of blacks were gunned down in acts of cold-blooded murder. Offices of the black-run newspaper were burned to the ground and thousands of Wilmington citizens were compelled to flee for their lives.

For more than a century, the white victors held history’s pen; characterizing these events as part of the righteous struggle to restore Wilmington’s natural social order. It was as if the Civil War had never happened. Honoring themselves, statues and other memorials were erected in Wilmington – and throughout the South – to celebrate the enduring and widely propagated myth of “The Lost Cause.”

As much as we would like to move on from these darker chapters of our shared history, there are many obstacles to overcome before we can do this with a clear conscience. An example is found in David Zucchino’s 2018 interview with Lewin Manly, Jr., a descendant of the editor of Wilmington’s black newspaper, Alex Manly.

Lewin was 11 when Alex died in 1944; a reminder that these seemingly dusty old stories are often not as distant as they sometimes appear.

In an age when white supremacists are once again on the march, Lewin says he has “no hope for them,” as he told the author. “You’re never going to change them.” Given that similarly-minded white men destroyed his grandfather’s newspaper offices and printing press, we can hardly blame Lewin for his bitter outlook.

While Manly’s lack of faith is a bit disconcerting, learning that many historically oppressed people may feel this way seems a step in the right direction.

Bookended by September 11, 2001 and January 6, 2021, Wildland takes us from the potentially unifying moment following a foreign attack upon our institutions to a day of domestic terror which exemplifies how divided we now are.

Before being posted overseas for roughly a decade, Osnos had lived and worked near each of these three cities. Upon his return to the country, he was shocked by their transformation. In Wildland, he vividly and personally documents their rapid decline as an interconnected illustration of the moral and spiritual decay of the entire nation.

Clarksburg is witness to the disintegration of the blue-collar middle class and the devastating long-term environmental consequences of unregulated coal mining. Greenwich stands as a grotesque testament to the immorality of unfettered capitalism and the curious way in which massive wealth encourages the building of higher fences. Chicago represents the bloody repercussions of a dis-compassionate and corrupt government wracked with the raw pain of burying children.

Set during our own time, the temporal reality of Wildland is both benefit and hindrance. Recent history such as this is rife with personal accounts and supported by massive amounts of readily-accessible documentation. On the down-side, writing about an age one has personally experienced is prone to unseen biases and omissions whose discovery will be the work of those who come later.

I would like to think that these future historians won’t be too harsh with us although I don’t have much hope in that direction. Perhaps one thing they might note is that historians Zucchino and Osnos did their part to reconcile our past with the present.

Given that there are those among us who wish to maliciously manipulate history in their favor, we should be grateful for those who call them out on it.