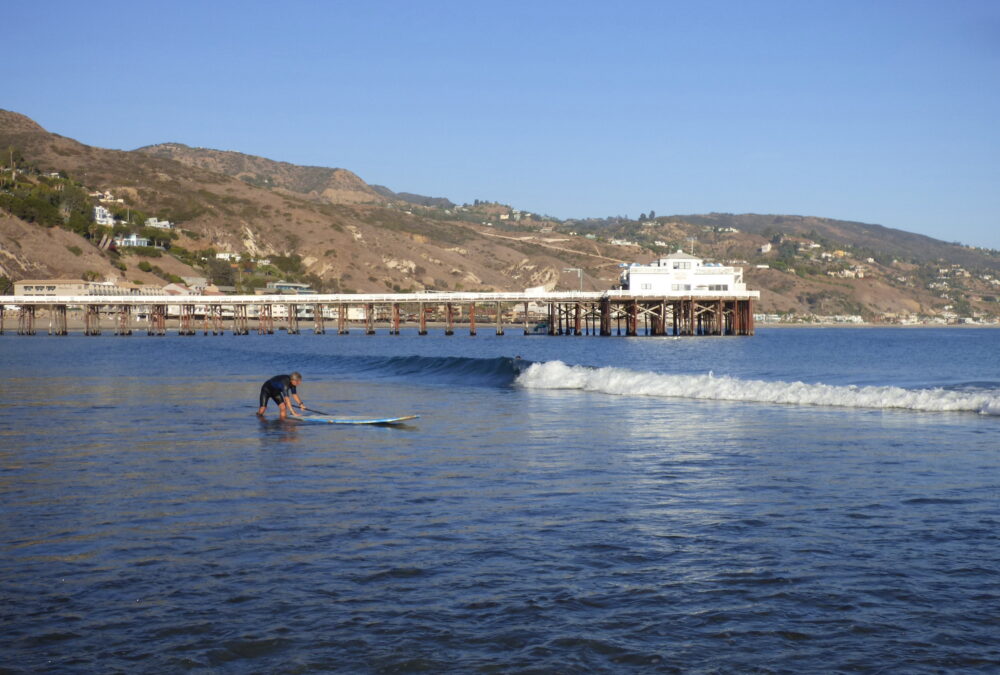 The Malibu Pier was built in 1905 to help the Rindge family bring in supplies to build the Hueneme, Malibu, Port Los Angeles railroad, and to transport ranch products like cow hides and grain to Los Angeles. It remained a purely utilitarian structure until the 1930s. The pier first opened to the public in 1934. A bait shop was built at the end of the pier in 1936. The military took over the pier in 1942 and used it as a Coast Guard lookout. The U.S. Coast Guard commandeered the Malibu Pier, using the bait shop at the end of the 730-foot-long structure to house the men assigned to the lookout station. A storm in the winter of 1943-1944 damaged the end of the pier, but after the war, the pier’s owner, William Huber rebuilt, replacing the modest bait shop shack with the fanciful twin buildings that are now a local landmark.

The Wall, synonymous with surf culture, was built in 1932, to fence off the Adamson family’s property from newly opened Pacific Coast Highway (Roosevelt Highway, in those days)—the driveway into the Surfrider Beach parking lot is actually a fragment of the original coast route. The Wall is decorated with tiles from the Malibu Potteries factory, which was located just east of the pier.

May Rindge gave the land on which the Adamson House stands to her daughter Rhoda and her husband Merritt Adamson as a wedding present. The Adamsons’ hired architect Stiles O. Clement to build the Spanish-Moorish revival beach house. The house is decorated throughout with custom Malibu Potteries tile from the family factory, as well as Arts and Crafts-era wrought iron, stained glass, and hand-carved and painted woodwork.

The building was acquired by the State of California in the 1970s and nearly razed to make way for a parking lot. Activists rallied to save it. It is now a museum and public garden, and a California Historical Landmark that is also listed on the National Register of Historic Places.

The adjacent Malibu Lagoon Museum is tiny, but it houses some fascinating relics of Malibu history. Tours of the museum and house are offered on Fridays and weekends, and the gift shop sells a selection of authentic and reproduction tiles and a one-of-a-kind selection of goods. The garden is open daily, and offers a pleasant walk through a tranquil landscape and a great look at some of the beautiful Malibu Potteries tile installations. Visit the website for hours and reservations. http://www.adamsonhouse.org

Like the Adamson House, the Malibu Lagoon came perilously close to being bulldozed. Plans to channelize the creek and build a yacht harbor and marina were only dismissed once the state acquired the wetlands in the 1970s, and even then, much of the estuary was filled with construction debris from Pacific Coast Highway and neighboring residential and commercial development. Despite the environmental damage, and some serious water pollution issues, the lagoon was recognized as an important ecological resource, one of the last natural estuaries in Southern California.