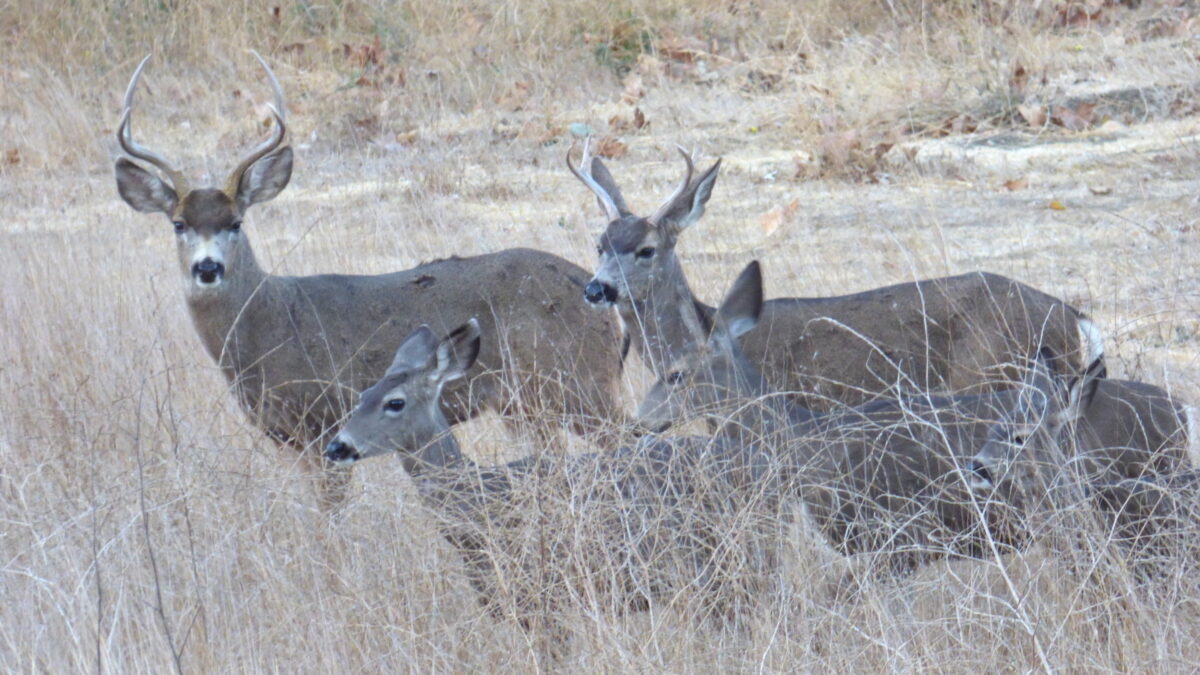 Mule deer are the largest native herbivores in the Santa Monica Mountains. These beautiful, graceful animals live among us, appearing along roads and trails and even in our gardens, but surprisingly little is known about them. That’s about to change, as genetic research begins to offer new insights into their lives. Photo by Suzanne Guldimann
Discover

Once upon a sunny morning a man who sat in a breakfast nook looked up from his scrambled eggs to see a white unicorn with a golden horn quietly cropping the roses in the garden.

—James Thurber, “The Unicorn in the Garden”

The mule deer buck was in the garden, attracted, like humorist James Thurber’s unicorn, to the last of the summer roses. We only have one species of deer in the Santa Monica Mountains: Odocoileus hemionus californicus, the California mule deer—named for this animal’s enormous, sensitive ears. The mule deer is the largest native herbivore in our area, and a frequent sight in Topanga, but a full-grown buck crowned with majestic antlers is almost as incongruous in the garden as a unicorn would be, and just as beautiful.

There’s a good chance that the buck in the garden, the one glimpsed by the side of the road on Topanga Canyon Blvd., the does and fawns passing silently along the dry creek bed of Garrapatos Creek behind the houses, and the family of does and yearlings in the meadow at Topanga State Park are all closely connected, but despite this species’ year round presence among us, surprisingly little is known about the local deer population. This species has only recently begun to receive the attention given to the other large native mammals that live in the Santa Monica Mountains.

A team of researchers, including biologists from the Natural History Museum and the USGS, is currently studying mule deer in Los Angeles and Orange County. Part of the study involves collecting and analyzing the genetic material in mule deer droppings to determine how barriers like roads and development impact genetic diversity. We’ve recently spotted a few deer in the Santa Monica Mountains that are being monitored with radio collars.

This species is directly connected to the health and well being of the area’s other big mammal, the mountain lion, the mule deer’s main predator.

Remote cameras have offered a unique and detailed look into the lives of mule deer. In 2013, National Park Service cameras documented deer passing through the Springs Fire burn zone in the western Santa Monica Mountains just days after the fire swept through.

Mule deer travel along a network of wildlife routes, unseen except when they face the hazards of crossing roads or are tempted into the garden for a drink at a convenient pool or fountain or a food source, like those last fragrant, golden Julia Child roses in the garden of TNT’s publisher.

Sightings and interactions become more common in late summer when water and food resources are harder to find in the wild. Smaller families of deer come together in the fall for mating season. Bucks battle each other in a ritual that suggests a cross between medieval jousting and a sumo match. The winner of this contest of strength and endurance earns the opportunity to pass on his genetics to the next generation of deer, and he will usually mate with many females.

Mule deer are experts at hiding in plain sight. Their coloring enables them to blend in with the vegetation and this animal’s power of stillness is remarkable. Humans may pass within feet of a deer and never notice its presence. Usually shy and gentle, bucks become fearless during rut and aggressive towards each other. When the breeding season is over, they shed their antlers and go back to a peaceful life. Herds tend to stay together through the winter, when food is more abundant, and separate into smaller family groups in the spring, when the new generation of fawns are born.

Gestation lasts about six and a half months. Fawns are born in late spring or early summer, Does usually have one or two fawns, although triplets are also sometimes born. A doe may leave fawn hidden while she forages. This can cause problems, when well-meaning humans intervene on the assumption that the fawn is abandoned or orphaned.

The California Wildlife Center is the only facility authorized to care for orphaned, sick, or injured mule deer fawns in Los Angeles County. Every spring, they report receiving numerous calls about fawns that appear to be abandoned. They report that, “in most cases they don’t need to be rescued as the finder is not aware that the mother is simply grazing nearby, and the fawn is not abandoned.”

There’s an important reason why CWC is the only one facility authorized to care for deer in the area. This is an extremely challenging species to treat, requiring special training and special care.

Fawns are weaned in the fall, when breeding season arrives, but they will stay with their mother for their first year.

Mule deer are browsers, not grazers. When conditions are good, they are selective eaters, preferring the tender shoots on select shrubs and trees—ceanothus and mountain mahogany are often among their favorites. During the dry season and in times of drought, mule deer are forced to forage on things they would otherwise not choose to eat. That’s usually when they overcome their fear of humans and browse in people’s gardens, where they run the risk of encountering cars, dogs, and fences—serious hazards.

The local mule deer are lucky: they are protected from hunters in most of the Santa Monica Mountains National Recreation Area—hunting is only permitted on private land—but they still face many challenges. Drought, climate change and habitat loss are serious threats to this species, and vehicle strikes are a major cause of death. Striking a deer can be devastating for the driver and passengers of the vehicle as well. Slowing down, especially at dusk and dawn, and staying alert can help prevent vehicle strikes.

Making sure gardens are either securely fenced—fencing around a vegetable garden or orchard needs to be covered on top or at least eight feet tall to keep deer out—or else wildlife permeable, to permit deer to pass through safely, can help keep this species safe. Keeping dogs on leash while walking and staying on trails while hiking also helps to protect deer from us.

Where there are deer, there may also be mountain lions. Staying aware is important. Deer and mountain lions are interconnected, each species needs the other—the lion eats the deer for survival, limiting population growth, and ensuring that the deer have enough resources to thrive. It’s a brutal but essential cycle.

Topanga’s deer are part of what makes this community special. Their presence among us is a blessing, well worth a forfeit of roses.