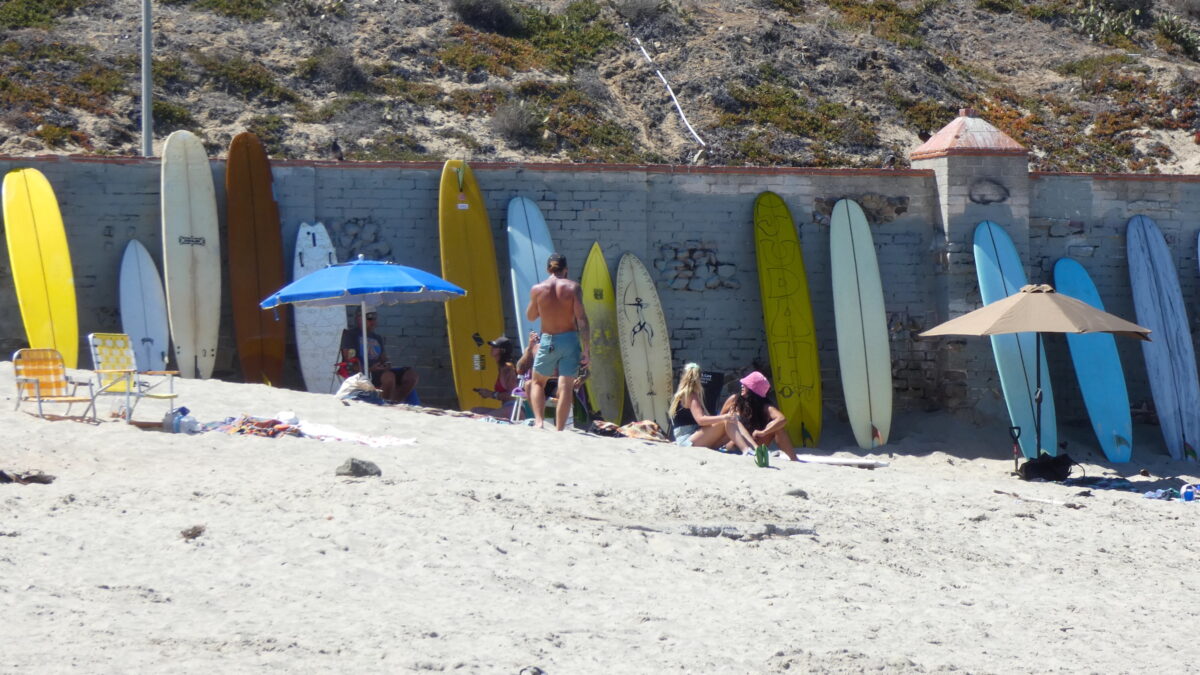 The Wall may not be much to look at, but it’s a surfing landmark. Built in 1934 to keep the public off the beach when Pacific Coast Highway was new, it’s now the backdrop for one of California’s most famous public beaches, Surfrider. All photos by Suzanne Guldimann
Discover

Malibu Lagoon State Beach encompasses just 110 acres, but it’s a distillation of the California dream and it’s one of our favorite winter destinations in the Santa Monica Mountains National Recreation Area. It’s easy to spend an entire day here, and still not fully explore everything this park has to offer.

Located where Malibu Creek flows into the ocean, this state park was the location of Humaliwo, the Chumash community that gives Malibu its name. The name is said to mean “where the surf sounds.” The village has vanished but the surf still sounds at Surfrider, one of the world’s great surfing beaches. This iconic stretch of coast, with its three storied surf breaks, is sandwiched between the Malibu Pier and the Malibu Colony. It’s also the location of the historic Adamson House and Malibu Lagoon Museum, with its treasure trove of arts and crafts era Malibu potteries tiles; and the Malibu Lagoon, a biodiversity hotspot that attracts more than 200 species of bird and is a top destination for birders.

The main route through the lagoon is wide and offers plenty of room for social distancing. A couple of short side trails provide a closer look at the birds that are a big attraction. The trail ends on the beach at Third Point, a surf break that is no longer what it was a couple of decades ago, but still breaks when conditions are right. Most of the surfing action takes place at First Point, near the pier.

When conditions are right, south-facing Surfrider Beach generates one of the world’s great waves—a perfectly formed barrel that rolls smoothly from First Point to the Pier.

The first surfers arrived in Malibu the 1920s, when the Malibu Movie Colony was constructed. May Rindge, who owned the entire 17,000-acre Malibu Rancho, needed money to fund her increasingly costly and protracted fight with the state over an easement for a coast highway. She initially leased the land on the spit of land west of Malibu Creek rather than selling it outright. Real estate developer Art Jones divided the beach into 30-foot-wide lots and advertised the property as a “movie colony,” successfully attracting silent era film stars, who paid $1 a month for each foot of ocean frontage. Today, those same 30-foot-wide lots sell for upwards of $10 million. The quaint cottages and bungalows have ballooned into mansions in a mad smorgasbord of architectural styles.

Early Colony residents included Ronald Colman, who built a cottage (#16) in 1926. Local legend says he often invited his friend and colleague David “Duke” Kahanamoku, who rode the waves on a massive redwood longboard, but he wasn’t the only one. Actress and colony resident Myrna Loy was also an early Malibu surfer.

In the years before WWII, the beach attracted surfers from Santa Monica, who had to climb through a hole in the fence. In the years after the war, the beach became world famous not because of the surf but because of the novel written by Frederick Kohner, about his daughter Kathy, the original surfer girl Gidget. Gidget: The Little Girl With Big Ideas was published in 1957. It would generate a tidal wave of spin-offs, surf movies, TV shows, memes and an entirely new lifestyle aspiration.

A new group of surfers took the spotlight in the 1980s, when pollution became a serious health concern. The Surfrider Foundation was founded by surfers Glenn Henning, Lance Carson, Tom Pratte, Chris Blakely in 1984 to protect surfers and the environment.

Today, Surfrider Beach’s popularity sometimes makes it too crowded to actually surf, but water quality has improved, thanks to the continuing work of activists and organizations like the Surfrider Foundation, and it’s still one of the great waves.

First Point, Second Point, and Third Point surf breaks, the Malibu Pier, Surfrider and Malibu Lagoon State Beaches are so important to surf culture that as of 2018, this area is the first ever surfing area to be listed on the National Register of Historic Places.

In winter, when Malibu Creek breaches the sand berm and empties the lagoon into the ocean it isn’t possible to walk from lagoon to the pier without getting wet feet, but it’s easy—if noisy and slightly nerve-wracking—to walk over the bridge on PCH, and the bridge provides a great view of the lagoon. On the east side of the creek one can explore the Adamson House and gardens, walk to the end of the Malibu Pier, and explore Surfrider Beach. The west side of the creek offers a tranquil walk through the Malibu Lagoon to Malibu Lagoon Beach. A winter low tide walk opens up the option of exploring extensive tide pools or taking a stroll along the oceanfront at the Malibu Colony, where an insane array of architectural styles crowd the land side. This is some of the priciest real estate in Malibu, but at low tide, the beach belongs to everyone.

If you linger long enough, this is an ideal beach to watch a winter sunset, but keep an eye on the time—this stretch of coastline disappears underwater during high tide with only shorebirds for company. Like the song says, California dreamin’ on such a winter day.