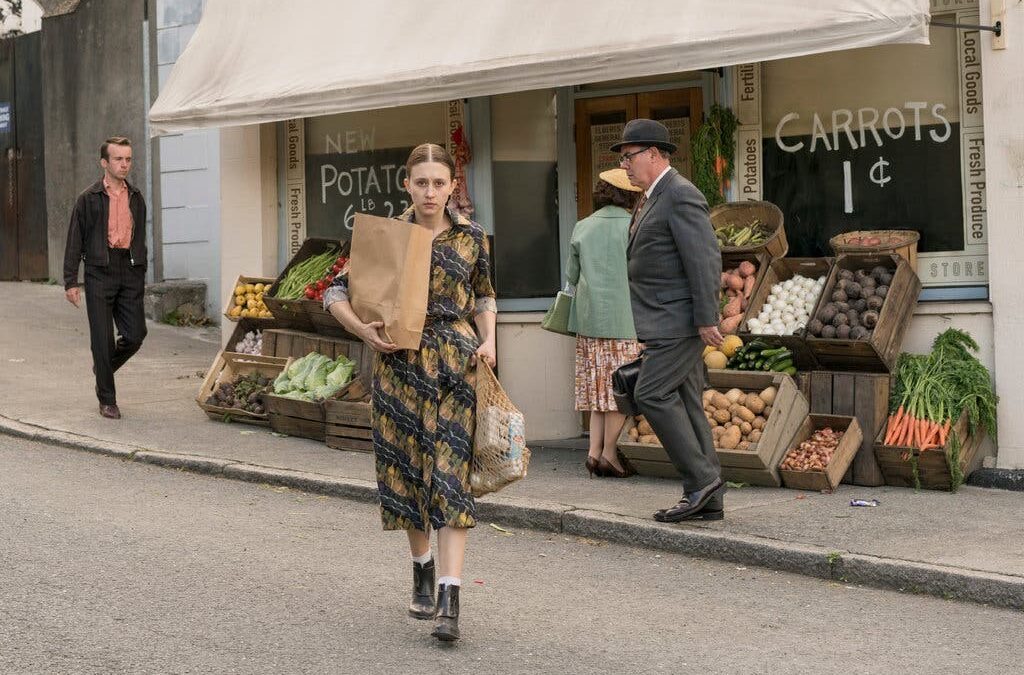 Merricat Blackwood played by Taissa Farmiga in a scene from We Have Always Lived in the Castle, 2018. Directed by Stacie Passon
Feature

We Have Always Lived in the Castle

We Have Always Lived in the Castle is a highly stylized mystery/thriller film, adapted by Mark Kruger from Shirley Jackson’s 1962 novel, and directed by Stacie Passon. The film follows Mary Katherine “Merricat” Blackwood (Taissa Farmiga), an 18 year old who lives in a large, family house with her sick uncle, Julian Blackwood (Crispin Glover), and older sister, Constance Blackwood (Alexandra Daddario).

Through Merricat’s narration, and Julian’s obsessive recounting of the events for his memoir, viewers are able to gather that six years before the start of the film, Constance was tried for the murder of her parents by way of arsenic poisoning. She was eventually acquitted of the crime, but villagers in the town nearby are still convinced she is guilty. Constance now seems to suffer from extreme agoraphobia, and has not left the house in six years—her life consisting solely of caretaking and housekeeping. She is a shell shocked shell of a woman; a pretty, perfect and plastic doll. She smiles persistently, despite challenges and criticism, and attends to the house, the needs of her uncle, and never strays farther than her garden. Daddario plays this character exquisitely, with hauntingly vacant eyes, only ever aiming to please.

Merricat is an odd and anxious girl who flits about casting spells of protection on the estate to keep her beloved sister safe from the wrath of the outside world. Every week, on her designated day to go into town to get groceries—Tuesdays—Merricat is subjected to the townspeople’s open hostility, thrown at her from all sides. She is convinced that one day, someone will penetrate the safe seclusion of her family’s home, and she does absolutely everything in her power to prevent that day from coming.

One day, Constance asks Merricat to go to the village on a Thursday, for she’s run out of sugar and wants to make a pie. Merricat protests; she feels unprepared—she hasn’t gotten a chance to set her usual precautionary spells and tokens in place before leaving the house, but Constance insists. Merricat rushes into town, intent on completing the errand quickly to get back to the house as soon as possible, but when she does arrive home, she finds she is too late. Their cousin, Charles Blackwood (Sebastian Stan), has come for a visit.

Merricat is instantly set on edge. She does not like Charles, and aims to get him out of the house as soon as possible. But Charles is intent on staying, and he seems to be forming a special bond with Constance, who has offered up their late-father’s bedroom for Charles to sleep in. Charles makes himself at home quite quickly, bringing a forceful cheeriness to the gloomy, unsettled house, which Merricat and Julian despise.

Six years prior, at that fateful dinner where the poisonings occurred, Uncle Julian had ingested the arsenic as well, but managed to survive. Julian is now fixated on the events that took place that night, and is constantly immersed in transcribing them for his memoir. Charles does not like Julian’s ramblings of the deaths in the family, and attempts to put a stop to them. Things begin to change in the large house as the newcomer gleefully takes over with dangerous narcissism and male entitlement. And Constance, excited by the new and confident visitor, falls under his spell.

We Have Always Lived in the Castle is a beautifully shot, artistic film that won’t be for everyone, due to its over-the-top “fairytale” style. An example of this is the moon, which is shown in the film about three times larger than it should be, sticking out from the screen like a sticker placed on a photograph. The film was shot in Ireland, and the scenery is stunning, vibrant and green. Visually, the film is almost too cookie-cutter-crisp, which adds to the glistening, “fairytale” feeling. Despite the film being stylistically overt, its unsettling and eerie feeling is conveyed mostly through the score (by Andrew Hewitt) and the acting—not necessarily through the plot or visuals. The characters are almost caricatures of themselves. Farmiga introduces viewers to Merricat right away, letting us into her head with every word, thought, and facial expression. But Daddario gives us Constance hesitantly, inviting questions about her insides, for she shows no raw emotion, only habitual politeness. Constance is who provokes the unsettling intrigue that viewers are bound to feel.

Passon has created a piece of artwork as well as a film, with brilliant colors and picturesque people. She seems to have executed her vision boldly, and chosen her cast extremely well. We Have Always Lived in the Castle is a captured moment in the Blackwoods’ lives—an important moment—maybe not the most important one that’s ever existed for them, but a striking, intriguing, and magical one, nonetheless. We Have Always Lived in the Castle (2018)—87% on Rotten Tomatoes. Watch now on Netflix!

COVID UPDATE: Masks Are No Longer Required but Are Still Recommended

The Power of Silence