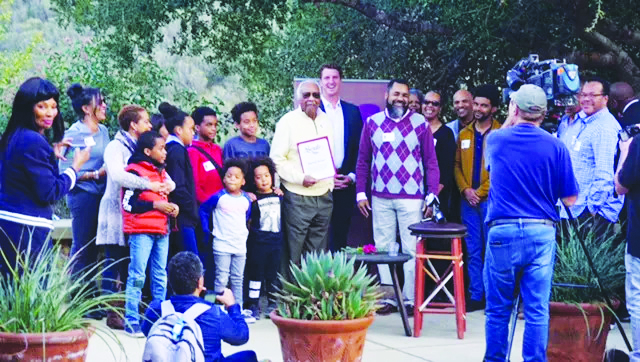 To Right a Wrong: The Story of Ballard Mountain

The new 13-minute film called To Right a Wrong: The Story of Ballard Mountain, documents a community effort to change the name of a local peak in Santa Monica Mountains National Recreation Area (SMMNRA).

Previously known as a racial slur, the mountain was renamed in 2010 to honor the first Black family to homestead in the Santa Monica Mountains.

The short documentary details the efforts of area residents and historians to remove the offensive name from a local mountain, located south of the cities of Thousand Oaks and Agoura Hills, California. Their actions reverberated across the region and ended up reaching the modern-day Ballard family, descendants of John Ballard for whom the mountain was eventually named. The inspirational, heart-wrenching film chronicles the resiliency of a family who overcame incredible hardships.

“So often people will give attention to something because it’s media worthy, but this was something that a group of folks thought was worthwhile,” said great, great grandson Ryan Ballard referring to the renaming effort. Ryan’s father, 96-year-old Reggie Ballard, was also extensively interviewed for the film.

Local historian and Moorpark College history professor Patty Colman and residents Paul and Leah Culberg were instrumental in making the name change happen. They chronicle their recollections in the film, along with SMMNRA park superintendent David Szymanski.

“Ballard Mountain is the untold story of an African American family’s experiences in the Santa Monica Mountains and the City of Los Angeles,” Szymanski said. “It is important because it reminds us of the unrecognized people who passed our cities and parks down to us.”

To view the film go to https://www.nps.gov/samo/learn/historyculture/ballard-family.htm

A Touch of Brightness in the Canyon

Sophie & the Baron Accepted as a Disney Documentary