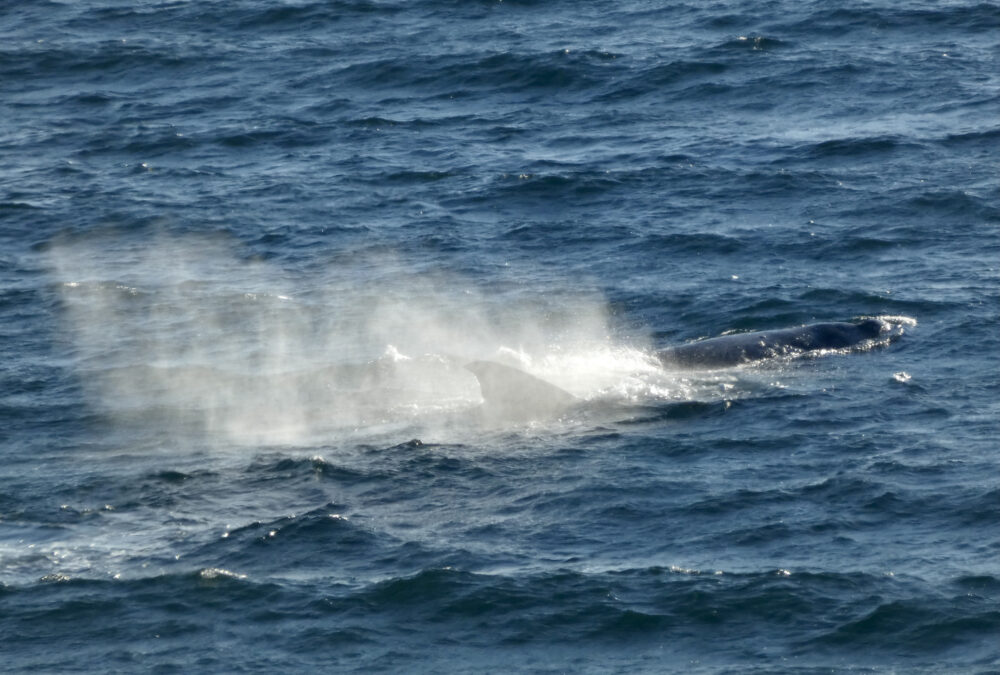 The fluke, or tail, of the gray whale can be 15 feet across. It’s this powerful tail that creates the whale’s “footprint” as it submerges. It’s rare to see a gray whale breach—leap entirely out of the water—but one can often catch a glimpse of the dorsal ridge, the backbone of the whale, which may have distinctive knobs that suggest a sea monster, or be almost completely smooth. Distinguishing marks like that can help researchers identify individuals. Photo by Suzanne Guldimann
Discover

The gray whales are back! Every winter and spring, California gray whales take part in an epic migration from the Arctic to the warm waters of the Sea of Cortez in Baja, and back again. It’s a 10,000 mile round trip. On the way south, whales are in a hurry to reach their breeding lagoons. They rarely linger or come near the shore. On the journey north, females with calves stay closer to shore, sometimes traveling in small groups made up of adults, calves and young whales. They are much easier to spot during the return trip.

March is usually the peak time to look for northbound gray whales, but the migration runs through the end of April, with some stragglers heading north as late as May.

California Gray whales were nearly hunted to extinction by the first decade of the twentieth century, when protections were passed in an effort to save the species. The population rebounded, but still faces major challenges, most of them man made. Warming ocean temperature caused by climate change is forcing whales to travel farther north in search of the tiny shrimp-like invertebrates that are their main food source in the summer. That means a shorter feeding season, and longer journey south to the warm water where they give birth. Ship strikes, water pollution, trash, ghost fishing tackle and noise pollution from cargo container ships, military vessels and even cruise ships impact all whales.

The American Cetacean Society’s Los Angeles Chapter runs a gray whale census from December  through late May each year. During the migration, trained volunteers keep watch from Point Vicente on the Palos Verdes Peninsula. That program, like so many things, went on hiatus during the height of the coronavirus crisis, but the volunteers are back.

The ACS volunteers regularly update their daily totals, and their observations help give whale waters at this side of the Santa Monica Bay a good guide for when to look for whales here. Gray whales travel at a speed of around five miles per hour and average around 75 miles a day. Whales sighted in the morning at Point Vicente will be passing Point Dume, approximately 45 miles up the coast, by late afternoon.

Project coordinator Alicia Sculman-Janiger states on the census website that the whales observed represent only a portion of the total number of migrating whales and that the study is not intended to be a measure of population, but it does provide important data on the whales’ nearshore migratory route and how it changes.

Gray whales can grow to be more than 45 feet in length and weigh up to 40 tons. They are mammals that must come to the surface to breath, but they spend most of their lives underwater, and only a small part of the whale is visible, even when they come up for breath.

Binoculars are helpful for whale watching, as is a telephoto lens, but they aren’t necessary. The key to seeing whales is making the time to go look for them.

There are plenty of good options for whale watch cruises out of Ventura, Marina Del Rey and San Pedro, but there is also a good chance of seeing whales from the shore. Corral, Zuma, Leo Carrillo and the small pocket beaches along PCH between Malibu and Point Mugu beaches are all good spots for whale watching, but the best spot is Westward, where the whales come close to shore just off of the Point Dume headlands and along Westward Beach.

The first thing to look for is any kind of disturbance on the water: a gathering of gulls; ripples on the surface of the water; a band of darker or lighter water. All of these can be signs that whales and other marine mammals like dolphins and sea lions are present.

Often, a gray whale sighting consists of just a distant spout or puff of breath, and they can hold their breath for a long time, so it’s easy to lose track of them before they surface to breathe again. Other tell-tale signs include the whale’s “footprint’—the mark on the surface of the water made when the whale submerges, and sometimes a quick glimpse of a back, fluke (tail) or flipper.

Occasionally the whales pause for a break. They may roll or spy hop—poke their heads out of the water. Gray whales can also breach—leap almost entirely out of the water in an athletic display that seems to defy gravity.

Sometimes the best way to spot a whale is to keep an eye on humans. A group of people pointing at the water is a sure sign something is going on. It’s also a good idea to take off the headphones and listen—if a whale is close enough to shore, sometimes you can hear it breathing before you see it.

There is free parking on Westward Beach Road, although it fills up fast on weekends. It’s worth paying to park in the Westward Beach lot at this time of year. Bring a chair and an umbrella and picnic and make a day of it; or walk up to the top of the Point Dume Nature Preserve and watch for whales from above.

There are no guarantees in whale watching, whether on a boat or on the beach. There may be a dozen whales or none at all, but an hour or two spent watching for whales is never time wasted. In its own way, it’s a form of meditation.

Vita is a Star!