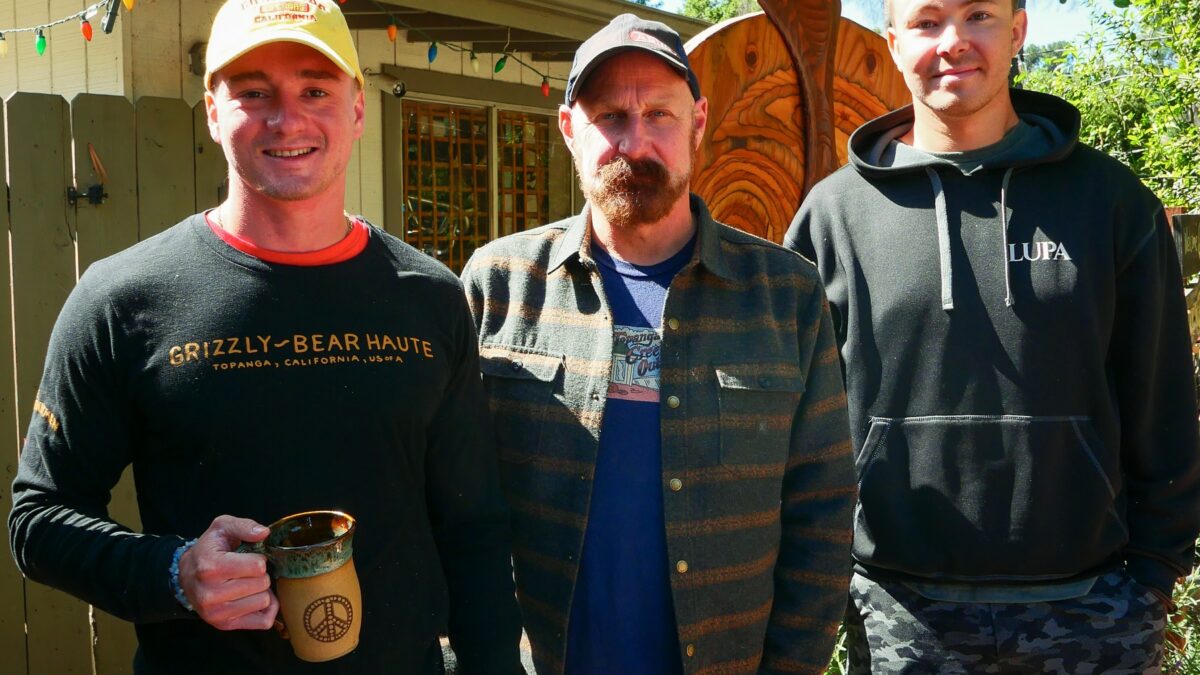 Chris Kelly and two of his Outpost team members Christian Harrison, Tucker Ambrose photographed in the garden at Topanga Creek Outpost. The garden is where bike repairs, recharging with a cup of joe, or burgers grilling on the bbq often took place. Photos by Saori Wall
Feature

Chris Kelly, founder of Topanga Creek Outpost and Rogue Journeymen, has decided to sell the creekside cabin that is home to his bike and leather goods shop.

“I have been at it 22 years, I’m ready for a new adventure,” he told me. “My mom passed away last year and I have started to realize if I don’t change it up now, I may never change it up.” There is an introspective softness in Chris’ demeanor, when he humbly shared, “I am not intimidated by becoming my own destination.”

We met as he was preparing for a 100 mile bike race. His pup Rover sweetly napped in the sun. A copy of Kay Ryan’s book of poetry Say Uncle rested on a coffee table nearby.

“I built up a good brand, I didn’t anticipate it but some people are interested in buying the business as well,” Chris says. He is currently contemplating his next move. It could be 1,200 acres of maple trees or an old fire station in Flint, Michigan. “They’ve had a bad wrap and they’re trying to flourish. People thought I was nuts when I moved here and they probably think I’m nuts to leave it.”

Chris makes a circle with a piece of chalk to a flat piece of stone  and fills it in, “I want to make people’s lives better,” he says. He makes a larger circle around the first., “Next, I want them to have a really good experience.” Making another and larger ring, he says, “Then I want them to have the best product that I can offer them; whether that  happens to be, say, Surly bikes, leather goods or maple syrup. There are some businesses that are trying to make lives better and the world a little better.”

I mention the book of poems and Chris shares that he picked up a practice of reading poetry on the trail after a rafting trip down the grand canyon. “Our guide, at the beginning of every day, would start by reading a piece of literature or poetry.”

“Do you know, The Wind and the Willows? Mr Toad’s Wild Ride is based on it. There is this part in the story where a mole is running through this field, the rabbits or townsmen are questioning why he’s in the field. He yells, “onion sauce, onion sauce!”

They were so confused by him yelling those words, that by the time they were done discussing what it meant he had already made his way through that field and gotten away.

So many times in my life I just want to shout, ‘Onion Sauce!’ and just go off to do my own thing. It really resonated with me. I thought to myself, ‘I need to do what that guide did before every ride.’ Now if I forget to bring poetry, people will have something they’ve brought. We’ll read Robert Frost, ‘Stopping by Woods on a Snowy Evening’, on a cold cold ride. When we stop a ride for poetry sometimes they’re shocked. To stop at a mountain lookout, take out an index card to write a haiku and read it.”

Chris has been in the bike industry for 22 years. He started in Hollywood in 1999 and moved up to Topanga in 2008. There is no question that he will have a positive impact on his next community.