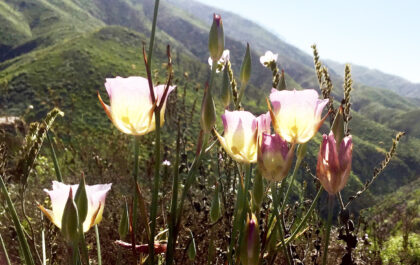 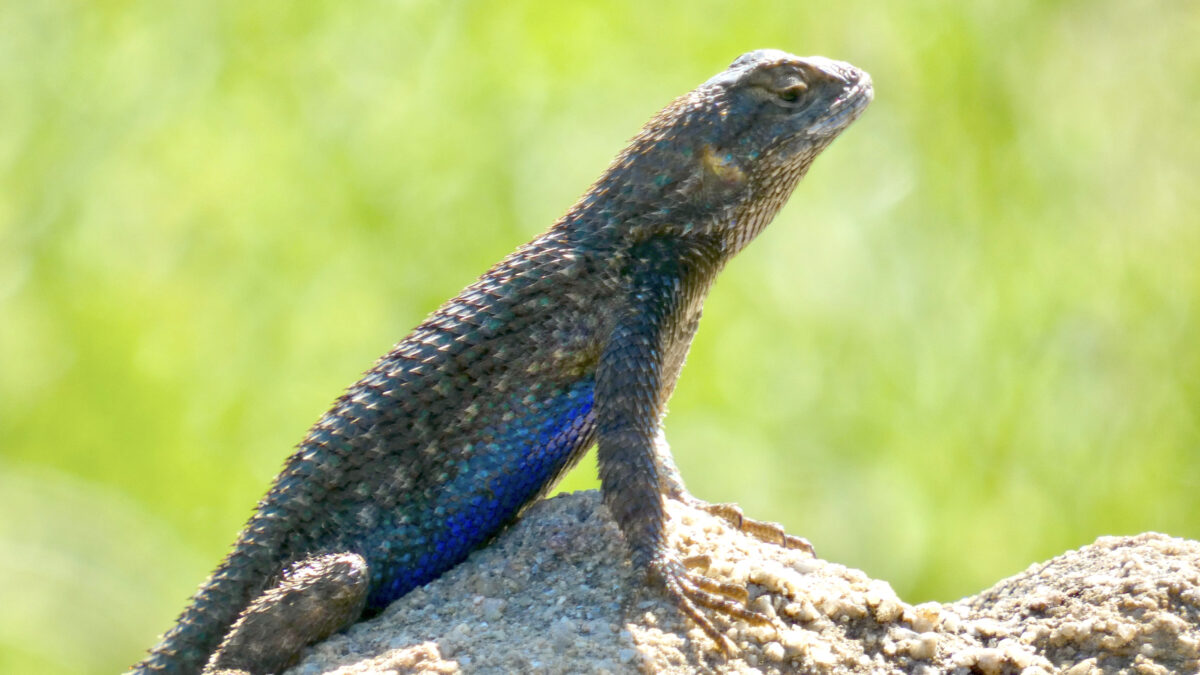 A regal Western fence lizard shows off its iridescent blue belly that gives this species its other common name. Photos by Suzanne Guldimann
Discover

I see him every day: busy hunting bugs among the potted plants on the patio, sunning himself on the warm bricks, regally perch atop a stone surveying his small kingdom from bright, inquisitive eyes no bigger than sesame seeds: a miniature monarch, unafraid of humans or the dog.

Anyone who lives within the boundaries of the Santa Monica Mountains has lizards among their nearest neighbors. They are a constant presence in the garden. Sometimes they show up uninvited in the house where they may end up mummified under the couch or on the cat’s menu, but mostly the lizard and human worlds coexist, although that coexistence has a troubled history.

There are seven lizard species in the Santa Monica Mountains: four can be found in even urban gardens, three are special concern species, at risk for extinction. Our resident lizard is a Western fence lizard, Sceloporus occidentalis, also known as a blue-belly for its iridescent belly scales. This species is far and away the most commonly seen reptile in our area. S. occidentalis is a small cousin of the iguana. It has adapted to urban life and lives alongside humans, successfully surviving in even the smallest gardens and yards, but also abundant in the wild.

Fence lizards are beneficial garden residents. A 2006 study in the Journal of Parasitology found that levels of Lyme disease are lower in areas where Western fence lizards are abundant. When ticks that carry Lyme disease feed on fence lizards, a protein in the lizard’s blood neutralizes the bacterium that causes the disease. Fence lizards also eat ticks, and other creatures humans regard as pests, including mosquitos, scorpions, centipedes, beetles and spiders. Fence lizards are, in turn, a key food source for everything from hawks and roadrunners, to gopher snakes and larger lizards.

This little lizard can live for as long as five or six years, so that fearless reptile that suns itself on our back step could easily be the same lizard, year after year.

Males are territorial during mating season in the spring, but seem to coexist with each other the rest of the year. This species, like many native reptiles, bromates during the coldest days of winter, becoming active only when it’s warm enough to thermoregulate, but it doesn’t hibernate and it is a year-round presence.

Some local gardens are also home to another iguana relative, the side-blotched lizard, Uta stansburiana. This small, elegant lizard comes in a surprisingly wide range of colors and may have spots, stripes, or no markings at all.

U. stansburiana is about the same size and shape as S. occidentalis, but its scales are smaller, not as rough and usually more colorful.

Like the fence lizards, they eat insects, and are in turn an important food item for numerous other species of birds, reptiles, and mammals. Unlike the fence lizard, they are not strong climbers and prefer to stay close to the ground.

Fence lizards and side-blotched lizards are active, lively lizards. They dart around the garden in pursuit of insects, squabble with their neighbors, and often lounge in the middle of the driveway.

The fourth common garden lizard is the fierce and robust Southern alligator lizard, Elgaria multicarinata. Alligator lizards are not closely related to true alligators, but apparently no one bothered to explain that to them. They are fierce, grumpy and aggressive. They swallow other lizards whole, devour mice and small birds and have a remarkably painful bite for something that doesn’t have teeth.

Alligator lizards can grow to be a foot long, and make their presence known in the garden, and they’ve given plenty of gardeners a fright because their undulating movement is distinctly snakelike. This feisty and aggressive lizard can live to be as much as 15 years old, and while it can be a slightly alarming neighbor, it also eats pest species, including slugs.

The Western skink, Eumeces skiltonianus, is the antithesis of the alligator lizard, so secretive that many residents have never seen one, although it also lives in our gardens. This sleek, shiny lizard that stays close to the ground and out of sight. It hides under rocks and dead leaves, where it hunts for sow bugs, crickets, beetles and moths. Skinks tunnel underground when the soil is moist, and females construct a tunnel for their eggs.

Adults are a sedate but shiny brown with darker stripes; juveniles have a bright blue tail.

Western skinks are relatively long lived, surviving for as much as 10 years when conditions are right. Our fifth native lizard may also be at home in the garden, but it is even more secretive than the Western skink.

The legless lizard, Anniella pulchra, spends its life almost entirely underground, tunneling through sandy soil for grubs and worms. It is almost never seen, and when it is, it gets mistaken for either a small snake or a large earthworm.

In the last decade, new subspecies of A. pulchra have turned up in unexpected places, including an empty lot in Bakersfield, and near a runway at LAX. It’s a distinct possibility that this small secretive lizard is quietly living its life just a few feet away from where I sit writing this post, but I’ve never yet seen one.

The remaining two local lizard species are increasingly rare and far less common to turn up in the garden than they were just a generation ago.

The coastal whiptail, Aspidoscelis tigris stejnegeri, is still fairly abundant in the less developed parts of the Santa Monica Mountains, but its numbers are declining and it is a California Priority 2 Species of Special Concern.

Despite its dramatic scale pattern of dark spots or checks this is a secretive, swift and wary species that is rarely seen except in late spring, during mating season. Like the Western skink, young whiptails have a blue tail that fades as the animal matures. The whiptail can grow to be 13 inches long, from snout to tail tip, making it our biggest lizard.

The seventh native lizard species is currently the rarest. Phrynosoma blainvillii, Blainville’s horned lizard, or the coast horned lizard, has suffered dramatic population declines from habitat loss, poaching for the pet trade, and the mass invasion of the tiny Argentine ant, which displaces the native ants this lizard feeds on. This small but charismatic lizard that was once common is now in trouble, and like the coastal whiptail and the legless lizard, is on the California Species of Special Concern list.

Seen or unseen, native lizards are an important part of the Santa Monica Mountains’ unique biome, but the fact that three of the seven are state listed special concern species is deeply troubling, a reminder that these remarkable animals are fragile, and their fate is directly tied to our own.

There are a few easy steps everyone can take to help lizards survive and thrive.

1. Avoid pesticides. All of our native lizard species depend on insects and other arthropods for survival. Insecticides can leave them without a source of food.

2. Plant native plants in the garden. Native plants attract native pollinators that are a food source for lizards, but they also provide cover and shelter.

3. Add some rocks to the garden. Whether it’s a rock border, or just a few decorative stones, adding rocks can help improve lizard habitat, especially if the rocks are grouped together.

4. Leave a lizard ladder. Lizards can drown in pools and fountains. Consider adding an escape route to help lizards and other wildlife climb out of a water feature. Commercial versions for swimming pools are readily available for less than $20. For a small pool or birdbath, a couple of bricks, some flat stones, or a piece of bamboo or other wood will work.

5. Make sure doors have screens to keep unwelcome visitors out of the house—it’s a lot easier to keep lizards out than it is to get them out once one wanders in.