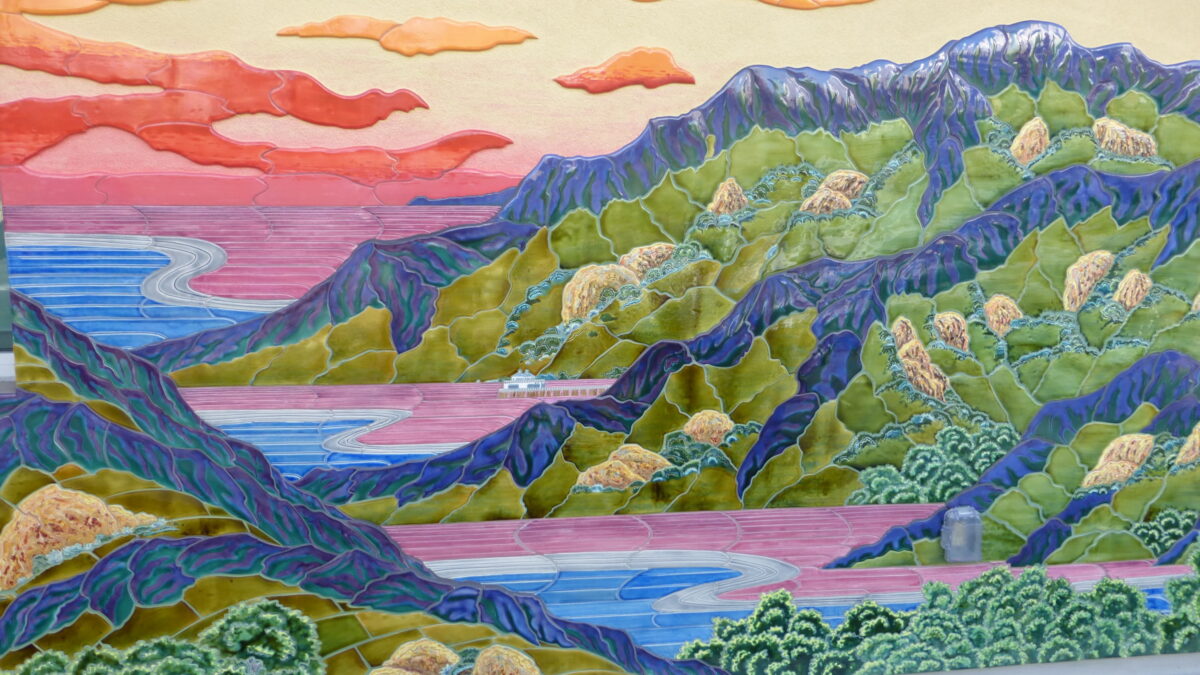 A detail of Matt Doolin’s 45-foot-long mural “Tapestry of Dreams” reveals how the individual tiles are shaped and put together to create a seamless landscape. Photo courtesy of Topanga Art Tile
ArtBeat, Shop Local, Topanga Life

An Ancient Art Is Alive and Well at Topanga Art Tile

The art tile tradition established by factories like Malibu Potteries in the early 20th century is alive and well in Topanga, where for more than 40 years, the Doolin family have designed and crafted tile artwork.

Leslie Doolin founded Topanga Art Tile in the 1970s with her sons Matt and Paul Doolin. Leslie has retired but her sons continue to collaborate and innovate. Their custom designs include entire landscapes made from hand-carved and glazed tile. Schools of local and tropical fish swim through mosaic seas of vivid blue tile, there are gardens of tile flowers, panels depicting surfers and famous surf scenes, geometric patterns that suggest mandalas or Celtic knots, and tile pools filled with jewel-bright koi that swim among tile waterlilies.

Topanga Art Tiles are used by designers everywhere, and are for sale individually as art objects at the Topanga Art Tile showroom. Many customers enjoy collecting them or giving them as gifts, but the duo’s main work is outside of the shop.

The brothers work together and on individual projects, designing and installing tiles and mosaic at local homes and businesses. Their projects range from tiled mirrors and framed scenes that can fit the smallest apartment, up to entire swimming pools, kitchens, patios, and the sides of entire buildings.

Paul, a gifted painter as well as a ceramicist, is currently creating a Tara shrine that combines a hand-sculpted image of Tara in a setting of mosaic tile and painted murals. He also has commissions for hand-carved and hand painted tile pet portraits.

Matt is completing an elaborately tiled pool for a Topanga family. While much of his work is in private homes, Matt says he especially enjoys creating installations for the county’s art in public places program. Many Topangans are familiar with the Doolins’ circular tile mural depicting an idyllic Topanga landscape complete with oaks, yuccas, and a canyon coyote, but there is a second major Doolin mural in Malibu.“Tapestry of Dreams” is 45 feet long and eight feet high. The mural was commissioned by the County of Los Angeles for the newly rebuilt Fire Station 71 at Point Dume in Malibu. It took Matt Doolin eight months to complete.

“Public art reaches a wider audience,” he said. “Tile creates an emotional connection. It’s a connection so strong that many clients become friends. And that is helping Topanga Art Tile survive the current crisis.

“It’s a tough time but we are still alive,” Paul told the Topanga New Times. “We totally rely on the Topanga community to keep us alive. Right now things are OK. At the beginning of the COVID crisis it was scary, but we just kept going. And now that people are spending more time at home, they want to make that space more beautiful.”

“Tile has a place in people’s hearts,” Matt said. “It’s an ancient technology in many cultures and it resonates in a special way.”

The shop opened in 1999, but the business began more than 20 years earlier, when Leslie Doolin and her friend and collaborator, potter Rebecca Andrews began experimenting with tile techniques,  drawing inspiration from the old Malibu tiles and other Arts and Crafts-era designs. Leslie’s sons, who studied art and design in college, were involved from the beginning, and the family worked together to develop their own unique styles and techniques.

Early experiments, including Matt’s picture tiles featuring surf scenes and local surf landmarks like the Malibu Pier, were well received. Today, Topanga Art Tile has an extensive catalog of tiles that include sacred geometry, abstract and art deco, and recreations of historical motifs, in addition to the fish, flowers and surf culture tiles that helped Topanga Art Tile earn its reputation. Many of their custom tiles are freeform—each fish or shell or flower cut out of the wet clay by hand.

Leslie eventually retired, but her sons continue not only to keep the business alive but to innovate and create new designs.

“We really respect and appreciate the support of our Topanga community that has carried us through the years,” Matt said.

Many clients are repeat customers, and tile is an enduring art form—it can last for centuries or even millennia, with its colors remaining bright and vivid. One client recently brought in a handful of brightly colored tiles that they salvaged from a home that was lost in the Woolsey Fire. It was an emotional moment.

“The tiles were already fired to 2000 degrees,” Matt said. “They survived.”

For the wildfire survivor and for the artists who designed and created the tiles, those fragments are a precious link to the past. They can also live again, phoenix-like in a new form. The brothers often use broken or imperfect tiles to create colorful mosaics. “We don’t waste anything,” Paul said. “That’s part of the beauty of tile. It’s timeless, and it lasts almost forever.”