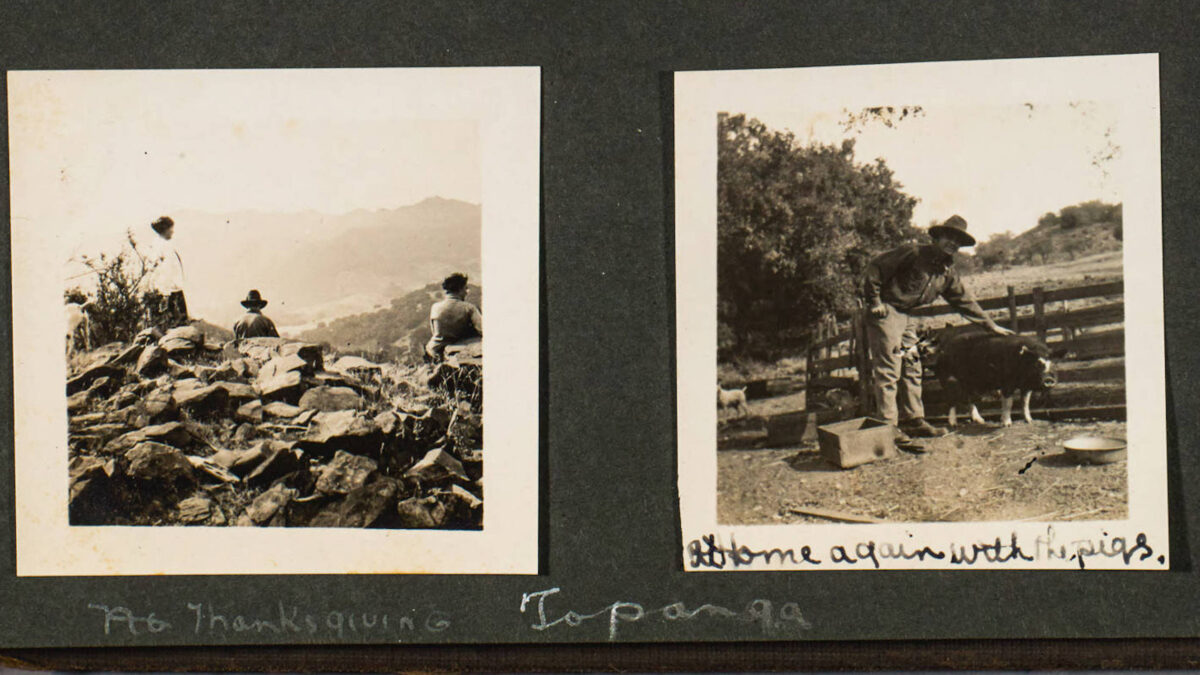 A Topanga Canyon hike followed by a visit with the ranch animals wrapped up Thanksgiving Day in 1917. It’s a good model for Thanksgiving 2020, a year when the coronavirus crisis is forcing families to rethink how they to celebrate the holiday. All photos: Robert Hutton, Ernest Marquez Collection, Huntington Library
Topanga Life

Photo Album Preserves Memories of Thanksgiving in Topanga in 1917

We are on our own this Thanksgiving holiday. Los Angeles County health officials, concerned with the recent increase in COVID-19 cases, are cautioning against having even small gatherings this year and are recommending that holiday festivities, like everything else these days, take place virtually. This isn’t the time for flights home or family reunions. It isn’t even the time for having a few friends or a favorite grandparent, aunt, or cousin over.

The official advice for Thanksgiving in the time of COVID is to celebrate only with one’s housemates, or if guests are essential, to host them out of doors, six feet apart, masks on except when eating, and no guests in the kitchen or even the dining room.

In a way, this year is like stepping back in time a century, to an era in local history when travel was a lot more time consuming and complicated, and holidays like Thanksgiving, while a highlight of the year, where homemade and celebrated on a more modest scale.

We have a glimpse of what that was like thanks to a photo album that belonged to longtime Topanga resident Robert Hutton that is part of the Ernest Marquez Photography Collection, now owned by the Huntington Library.

Bob Hutton’s father, Superior Court Judge George Hutton, purchased the original 40-acre homestead of the Torres family in Topanga Canyon in the 1900s, and built a mountaintop cabin that the Hutton used on weekends and for vacation. Robert loved the land and would later build a home there for his family. He was a senior at Santa Monica High School in 1917, the year he snapped photos of himself and his friends and neighbors on Thanksgiving Day in Topanga.

The people he photographed include Stella McAllister—known as “Mrs. Mac”, who may have cooked Thanksgiving dinner for her canyon neighbors that year. Stella homesteaded a claim near Cheney Road in 1905. She had already built a reputation as a superlative cook when her husband died not long after they moved to the canyon. She established the Topanga Tavern in her home to support herself. The tavern offered home-cooked meals and tent cabin rentals for the new influx of automobile-owning weekenders and day trippers. It also served as a boarding house for Topanga residents, including some of the canyon’s school teachers.

Her dinners were legendary, and the tavern was a local institution for more than a decade. It would have been at the height of its popularity in 1917.

We have a good idea of what might have been on the menu. One of the photos in Hutton’s album shows a beach picnic and fishing party with a fantastically impressive catch on display. Another shows members of the Greenleaf family, close friends of Bob Hutton at work in their orchard. The image is titled “the pear pickers.”

A 1907 article on Topanga life in the Los Angeles Times written by Cloudsley Johns, states that “almost everyone” in the canyon raised chickens, ducks and turkeys, some also kept goats, and others tended bees and sold honey.”

The Thanksgiving holiday spirit captured in Hutton’s photos is low-key—an after dinner stroll in the canyon; a hike among the canyon’s boulders; a peaceful afternoon spent with beloved dogs—or in one photo, with the ranch pigs; and the cycle of choirs that had to be done by his homesteader neighbors—holiday or not.

Hutton’s photos are bittersweet, a moment of peace and contentment among people who would soon face the horrors of the first World War and their own pandemic crisis: the 1918 Spanish Influenza, a pandemic caused by a virus now known as H1N1.

This pandemic killed an estimated 50 million worldwide, including as many as 700,000 in the U.S. It arrived in Los Angeles in September 1918. On October 10, 1918, the Los Angeles City Council passed Ordinance 38522, which closed schools and prohibited other public gatherings. That ordinance is credited today with limiting the impact of the pandemic in the area. Even so, it is estimated that 26 percent of all deaths in Los Angeles County during 1918 and 1919 were caused by H1N1.

Robert Hutton couldn’t know it in 1917, but there would be empty places at the Thanksgiving table when the war and the pandemic were over, even in remote and peaceful Topanga.

Many 21st century Topangans will be spending their Thanksgiving this year in much the same way Robert Hutton and his family did in 1917. This year, even these low-key activities require keeping friends and family members six feet apart and wearing face coverings, but the spirit of Canyon peace and tranquility captured on film more than a hundred years ago by 17-year-old Bob Hutton will still be present. In 2020, as in 1917, we have a lot to be thankful for.

Learning to Express Our Feelings Needs to Be Taught At Home