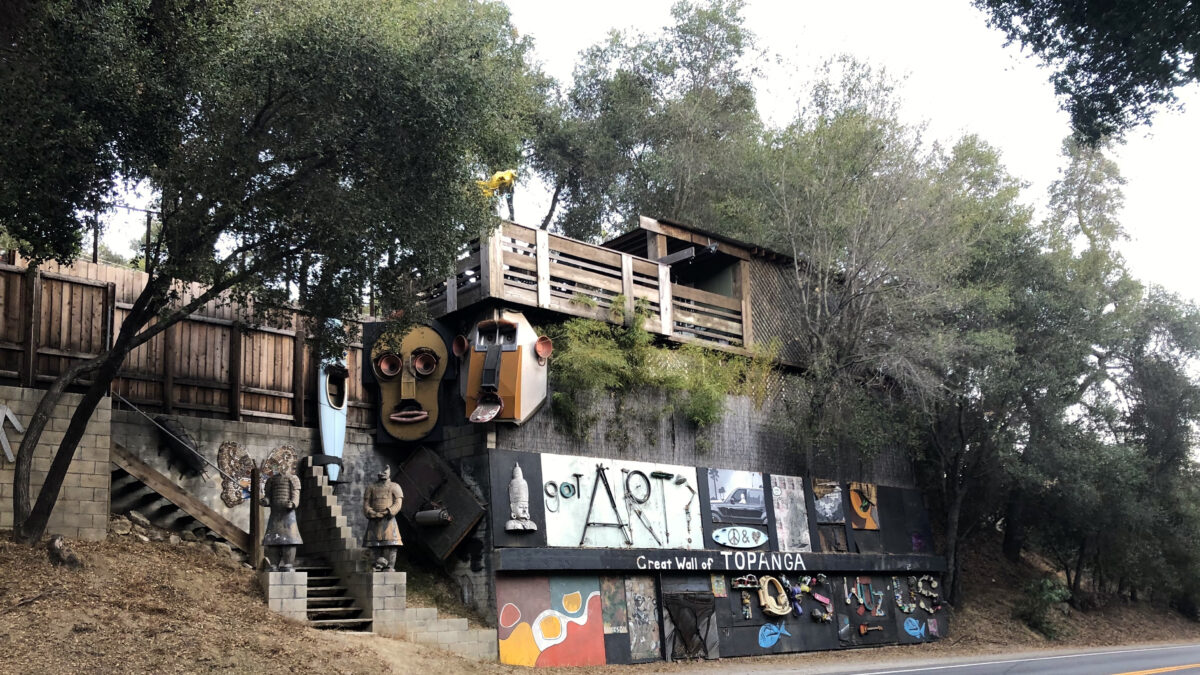 If you ever liked to play I Spy with My Little Eye or loved Hidden Pictures in Highlights magazine, you will appreciate gazing at the visual riddles embedded in the kitschy façade of the Great Wall of Topanga (but not while driving!). From the eight-feet-tall faces of “Mount Rush Hour” to the weathered murals, giant creatures, and messages composed in oversized Tinker Toys, you can pick out an eclectic array of everyday objects. Find three push brooms, two baby dolls, a pair of crutches, a barn, a tractor, Mickey Mouse, the Eiffel Tower, a bed frame, a surfboard, a shower head, a kayak, everything but the kitchen sink—oh wait, there is a kitchen sink. A double-bowl stainless steel sink forms a set of sunken eyes that knowingly watch tens of thousands of vehicles traversing the boulevard.

The Great Wall of Topanga, located north of the corner of Hillside Drive and Topanga Canyon Boulevard, is the creation of Rick Denman, a resident of Topanga Canyon and Cambria. Rick bought the property in 1998. The retaining wall itself was first built around 1960. It failed, and was rebuilt of poured concrete anchored to deadman plates, presenting an irresistible blank canvas. Rick began filling it.

One morning in 2011, Rick learned from a neighbor that during the night the image of an Indian had been stenciled on the wall, with the word “accountability” written in loopy spray-painted cursive. His neighbor speculated it was a Banksy (whom Rick had never heard of), a notion echoed in the March 2011 issue of the Topanga Messenger. The notorious and secretive British street artist had recently been in LA to promote his Oscar-nominated documentary Exit Through the Gift Shop. Banksy had tagged a white, cylindrical water tank with a spout like a “trunk” on Pacific Coast Highway in Pacific Palisades in precise block letters that read: This looks a bit like an elephant. Within a couple of weeks the tank had been hauled away by art collectors (evicting a man who dwelled inside). In London, a Banksy street mural had been extracted from a concrete wall and sold for £750,000.

Rick Denman’s retaining wall was in peril of being jackhammered by rabid collectors. He learned it was not a Banksy, however, but the work of an artist going by the tag Accountability. Rick met Accountability when the artist stopped at The Wall to chat. When he saw that Rick was not angry about the graffiti, he confessed to painting it.

Not only was Rick not angry, he offered Accountability better material to paint on—HardieBacker Cement Board, which doesn’t rot or mold, and installed Accountability’s next painting, “Woman with Backpack and Dollar Sign”, higher on The Wall, to better display the work.

At around that time, as a father of two, Rick was overloaded by the plastic toys that are the jetsam of a typical American family. Giving them “a last gasp at life before the landfill,” he mounted “the terrible waste that is plastic toys” on pegboard and bent conduit, making a collage that takes a poke at the nation’s leading toy retailer in “Toys Wuz Us”.

“The art on that wall is trash,” people have told Rick. “Yes,” he says. “That’s the point. I never claimed to be an artist.”

The giant rat trap baited with a can of spray paint is another nod to Banksy, who often portrays himself, the street artist, as a rat (an anagram for art).

Rick’s original intent was to rotate the art showcased on The Wall, which currently displays an abstract by neighbor Lili Sigal; the hand and footprints of his young son, Erickson; among the works of many other artists.

Robert Hill of Woodland Hills contributed the butterfly, and the gecko on the south wall.  His medium is beer bottle caps, brightly colored discs from bottles of Samuel Adams, Becks, and 805. Time and the elements have mellowed Hill’s colorful creatures to a pleasant, rusty patina.

On the northern section of the wall basic wooden figures, static in play, commemorate the twenty kindergartners slain in the 2012 shooting at Sandy Hook Elementary School.

“It was a rainy Saturday, and so depressing,” Rick says, “I just wanted to say something.” Observing his rule to not purchase material for The Wall—to only repurpose found, discarded and extra stuff, he went to work on the woodpile. Rick installed simple figures that evoke the feeling of children playing under the oaks, along with the statement: 20 KIDS! Somebody, apparently holding the false extremist claim that the Sandy Hook shooting was a hoax, reshaped the boards to read 20 LIES! Rick fixed it back. He later modified the words to read simply KIDS, to accommodate a friend who got depressed facing a reminder of the massacre on his daily commute.

Another neighbor donated two life-sized terracotta Chinese warriors to The Wall, reproductions of two of the 8000 the clay soldiers discovered guarding the tomb of Emperor Qin Shi Huang. The sentry sculptures graced that bend of the road for years, until this March, when their heads and a hand were smashed off.

Beside The Great Wall of Topanga, Rick Denman’s credits underscore his discontent with a “throw-away society.” He fabricated a sculpture from discarded bicycle forks and soda cans, with wheels spinning in the wind, which was installed at the Cambria Bike Kitchen (a non-profit that provides kids with bikes and takes them riding.)

Rick has raced bicycles, coached velodrome bicycle racing, and worked as a technical coordinator and stunt cameraman specializing in bicycles and rollerblades for films including American Flyers, and Quicksilver, and the television show Pacific Blue. He rode his kids to Topanga Elementary School on a tandem bike, sometimes passing as many as 240 cars stuck in traffic en route. Formerly an ardent Topanga Trash Warrior, Rick is the founder and organizer of Bicyclean! a crusade to clean up the roads.

Bikes are a super efficient means of trash pick-up and, “No one else is gonna do it.” Bicyclean! was featured on Velo News when the pandemic quashed racing, and earned Silicon Valley Bicycle Coalition’s Program of the Year award in 2020. Check out Bicyclean! on Facebook.

Anybody experienced in ceramics, who can help restore the terracotta warriors’ heads and hand, is urged to contact Rick Denman. He has the broken pieces. Rick is open to speaking with artists interested in displaying on The Wall or inventing the fourth face for Mount Rush Hour. Contact Rick through The Great Wall of Topanga on Facebook.