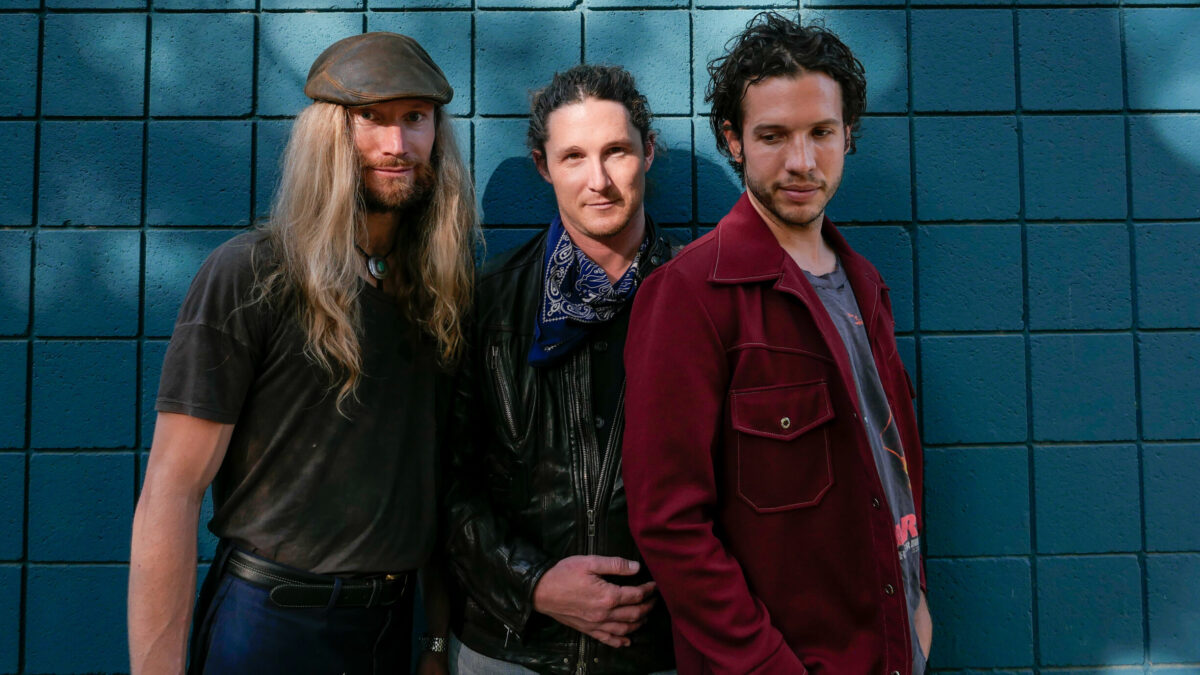 The Rackets quietly glide onto the stage, over dozens of entangled cables and patterned rugs likely as old as the venue: Del Monte Speakeasy, or Townhouse in Venice, California. During prohibition one would appear to merely be shopping for groceries, perusing the shelves, when in fact it was a front, and if you knew how to ask, you’d be snuck in and crammed into a small pulley system in the wall that no claustrophobe could bear, no matter how thirsty. They’d lower you into the basement where forbidden spirits were slung from risky barkeepers. Luckily now there are stairs. Del Monte Speakeasy’s drinks are an homage to that era.

The three musicians who comprise the band Rackets are so tall their heads almost reach the ceiling. The room full of chatty revelers falls silent, heat complaints become whispers, the stuffy air, the wait, all worth it. Within minutes, the entire floor is dancing and thankfully, we’re crammed in the basement so there is little chance of collapsing through century-old floorboards.This performance took place a year before the pandemic and, oh, what so many would do to be in a sweaty venue, shouting, “Want another drink?!” at one another, spilling cocktails onto a sticky floor. The Rackets 2019 single ‘Ooh Aah’ feels jubilant, reckless and meticulous all at once. Harrison describes their sound as, “The same feeling you get from standing next to an oak tree and a squirrel drops an acorn on your head.”

Before sharing a stage, Harrison Kipner met Dane Sandborg playing in the mud in a playgroup at Topanga Elementary’s Kindergarten and it was Dane who introduced Harrison to their percussionist, Aaron Westine, who draws from artists like Rubinstein, Babatunde Olatunji and Art Tatum. Dane and Aaron were neighbors in Malibu West and started collaborating on music together in 2005. The three first played together as a band in 2012.

Harrison and Dane describe their childhoods growing up in Topanga as wild and free. “There’s a golden shine to all of those memories,” Harrison says. “Everyone’s parents did different things, so everyone’s houses we would play at were different experiences. I loved that.” Like most musicians, Covid shifted their trajectory significantly.

“We had tons of shows planned, and that’s all we had on our mind. The time to ourselves became a reminder of why we were even doing it.”

Harrison is a third generation musician. His father and late grandfather Nat are his biggest mentors. “I have a vivid memory of my dad dropping me off at Topanga Elementary pointing at the stereo as we listened to the radio saying, “What section is this? Is it the verse or the pre?” I was in the hot seat when he’d drive me. I learned how to be in a studio, and how to let songs happen. All of these wonderful tricks for working through musical, melodic, or lyrical problems.”

Dane holds the calm of the canyon while being so close to a city close to his heart. “We got to be kids running around exploring without too much censorship. My parents were very attentive but it felt safe enough to allow me to explore outside so long as I was home by dark. Presently I feel like Topanga’s community is getting even stronger and feeling like what it once was.”

“We hadn’t gotten together at all during the pandemic really”, says Dane. “We kept in touch and were planning things but for the most part we were all on our own individual journeys which I believe inspired us all deeply. We just recently got back into the swing of things this last March and we fell right back into it. It feels great.”

Their first album, Red Flag Days, was recorded in about a week. “Our new EP is really exciting for us,” Harrison says. “We weren’t limited by the thought “could we do this live?” Instead it was just, “Do we like this or not? Each song is completely different. We also sought out and found a producer. We’ve been huge fans of Stefan Macarewich, and he’s really making it all possible.”

Harrison describes their sound as pop first, “because at the end of the day I always see my dad pointing to the stereo. Dane and Aaron make it so wild and unkempt that it brings it somewhere new. It becomes rock, alternative and indie. Dane always lets ideas be entertained, he’ll smile and say, “ok, ya let’s try it” but I can usually see in his eyes that what we are doing is lame. When he’s right he never boasts, it just drifts by and we keep going.”

“He knows when things will land in real life where I can just float away. Aaron is even more subtle still. I don’t even know how he got this instinct for wholeness, but he just has it. Sometimes he just knows something before everyone—it’s crazy. We’re actually in the studio now, did a bunch of takes and after one of them he said, “I’m at peace with it”, and we all knew we were done.”

The band is looking forward to live shows. “I’m just excited to remember that buzz when you get up on stage and the air is thick with anticipation,” Harrison says. “It’s like everyone’s on this bus and you look at everyone in the rear view mirror and they’re saying with their eyes, “where are we going driver?”