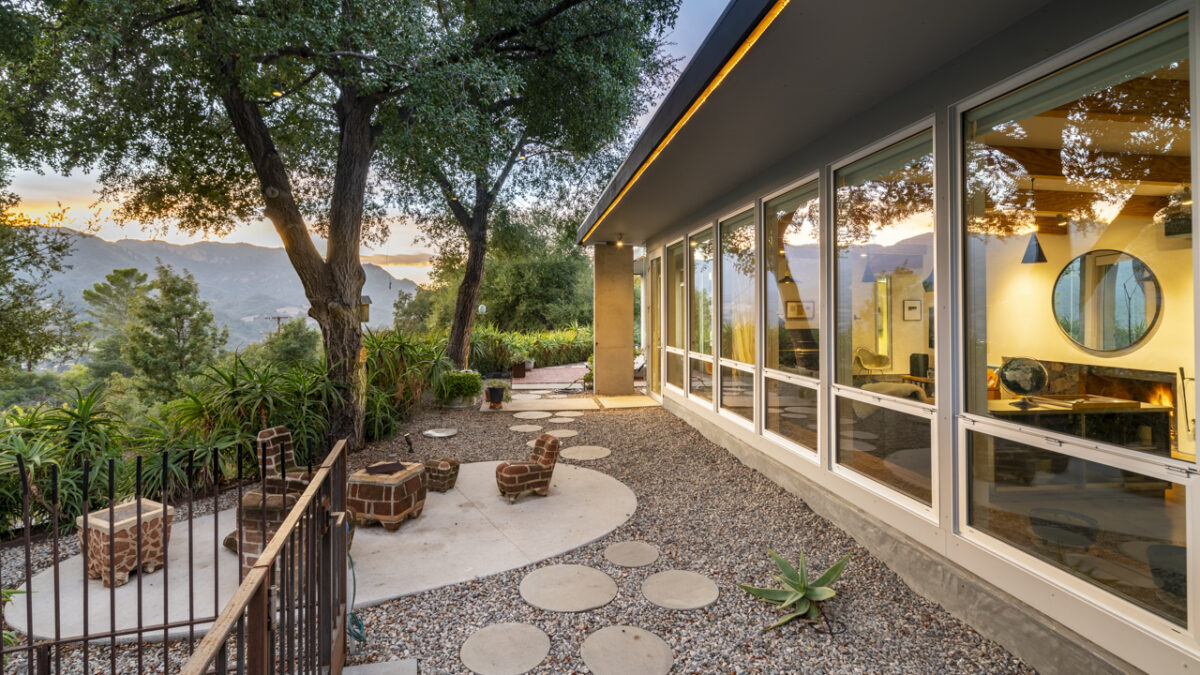 Architects and Topanga residents John Jennings and Sasha Tarnopolsky designed a home with Midcentury aesthetics and 21st century technology that embraces its views of the canyon while integrating into the environment. Photo by Jason Christopher
Engage

John Jennings and Sasha Tarnopolsky, husband and wife, architects, and founders of Dry Design, reinvented their former home in Topanga Canyon. Sasha from Canada, and John, born in South Africa and raised in Botswana first met when his family moved to Canada and in 1991, the pair moved to the US. Walking through the home they designed together I’m overcome with feelings that reverent attention was paid to the space and how it’s situated in the canyon; to the gifts and demands of living adjacent to nature — weather, flora, fauna and yes, wildfires.

The design duo originally purchased the home in 2007; construction began when in May of 2008, “with two children and one dog” they moved onsite into two small cedar wood cabins for the entire construction process. “It was amazing and something we’ll never forget,” John shares. “When the girls were sleeping I would sit on this little deck at night and work from my computer. We had an outdoor wood stove so if it was cold I would sit close to the stove to stay warm.” The home was completed in 2009.

John received his BA from the University of Toronto, studying English literature. “My last year, I took a course called Architectural History and discovered a passion of mine I didn’t know existed,” he says.

After a summer program at Sci Arc (Southern California School of Architecture) he applied and got his Masters. “In my second year of grad school I went to Japan for a semester, and it was without a doubt the most influential experience of my architectural career. I was inspired by both the traditional and modern; you have Buddhist architecture that dates back to the fourteenth century and earlier as well as contemporary structures.” Something he learned from Japanese architecture was implementing a three-volume structure that staggers in to allow much more surface area for light and air. “The plan sophistication they figured out 800 years ago is still far better than most today,” he says.

After graduating Sci Arc, John and a handful of colleagues started a design collective called Hedge. For 12-14 years they shared space, ideas and projects. “It was a non-traditional way of getting to your practice,” John explains. “Traditional ways are all getting turned on their heads and in a lot of professions I think this is true.” Within Hedge design, Dry Design was born.

“When I was a teen I didn’t have a linear path to university,” Sasha shares. “I was always a very practical minded person. In grade 13 I looked through a binder and discovered something called Landscape Architecture that was creative, mathematical and professional. It all appealed to me. It was a practical decision that I really grew to love so much.”

Sasha got her degree in landscape architecture from the University of Guelph, and undertook a professional development period at a local landscape company in Santa Monica, Pamela Burton and Co. (the pair married at Pamela’s Ojai property) “[Pamela is] an amazing person and I learned a lot there,” Sasha says. “Landscape design is fun, challenging; it’s rewarding.”

Many aspects of the couple’s Topanga home reflect Sasha’s interest in landscape architecture and especially firewise, Topanga-appropriate landscaping. The exterior and landscape reinforce a gentle footprint as well as survivability to fire threat; the home’s construction includes Hardie paneling, lots of gravel in the landscaping, not much vegetation up against the house, and intentionally planting burn resistant native flora. “It’s as firesafe as you can get.”

Walking through the home for the very first time is a multisensory experience; soft light trickles in with views overlooking the canyon. “The view from here has such personality, sometimes hazy, changing every day,” says Sasha.

The structure reflects a balance of opposites. As you move through the home, the concrete on the floor changes between a sand finish and smooth. “Where people walk, we did non-slip sand finish,” John shares. “All the rooms have smooth trowel finish.” The floor’s finish is complemented by ceilings of 350-year-old cedar wood sourced from a friend in Idyllwild.

The private rooms are on one side of the house and the public shared spaces on the other side. John and Sasha’s daughters’ bedrooms are separate spaces divided by built-in bookshelves.

“The rooms were porous to each other but it still felt like a defined space,” says John. “It was good for their relationship, it was nice.”

“They learned to depend on each other,” Sasha adds.

John describes the home’s design as “California modernism meets Japanese architecture.” The master bedroom has a pocket door that opens fully to a daybed and garden. Their original design changed slightly during construction.

“We learned the main heat gain is the western sun and it blasted through our bedroom,” John explained.“The daybed outside our bedroom would need a canopy or shade to reduce heat in that part of the home.

Sasha’s love of cooking was an important element in designing the kitchen, with a door over the counter that opens completely to an outdoor space. “If you’re serving your guests the plates can slide right through. “If you think about it, this kitchen space, you have exactly the same volume mirrored in the indoor and outdoor living space. Half the year you are living in the outside living room and the other half, you’re living in the inside living room.”

They both loved the idea of reclaiming water and claiming electricity. Sasha mentions that wherever they’ve lived, they’ve always had a general awareness of rain. “It’s an incredible feeling when it rains to watch the water pour into these tanks.” 4800 hundred gallons of rainwater can be collected into three 1600 gallon tanks on the property, harvesting all the roof water from the home. “In two inches of rain they’re full. We designed them so firefighters can use them as a fire hookup, with a regular hose bib which can also irrigate the garden,” says John. “All winter we are able to water with the residual rainwater that they store.”

Under the box gutter drain there is a galvanized metal conduit, placed there for any future solar panels installation. Panels can be fed directly into the conduit that can drop photovoltaic power into the meter. “If you had a situation with the Woolsey Fire where power goes down, batteries can be set up to run the house. Your fridge, alarm, the internet can still function. We left room for it to be implemented one day. It was a lot of design work to figure out how to have the roof drain to one single point, mostly roofs drain to seven or many different downspouts. We had to consider how to capture the most water and electricity.”

The family also kept bees on the roof, never harvesting the honey. “Bees are vulnerable,” Sasha shares. “To wasps, scrub jays, ants, wax moths. You are battling so much and it’s all microscopic and small.”

“It’s all the females that have to do everything too” Sasha says and they both laugh.

They divulge that not every home project is going to be a success. “We did try to grow vegetables and that was a complete disaster. Gophers, woodrats, deer, coyotes in the strawberries. It has to be completely enclosed.”

Before I leave they take me to a back corner of the property and point out a wooden notch built connecting two properties. Their daughters Josie and Anna are 16 and 18 now but when they were three and five years old they would play beneath the trees there. All summer their daughters would visit neighbors their age and build forts together. Over time, Sasha and John noticed deer were deterred by fences from crossing there, so they designed and installed a wooden notch for deer to walk through to avoid jumping onto Entrada. “We decided to try and see if they would take the shortcut if we gave them an easier jump and sure enough.” The mini wildlife crossing in their backyard was a success.

Over the driveway to the property on Entrada Road is an iron stone arch built by mason Bill Kneen in the early 1900’s, a continuation of the property’s history.

Now Is the Perfect Time for Native Garden Plants