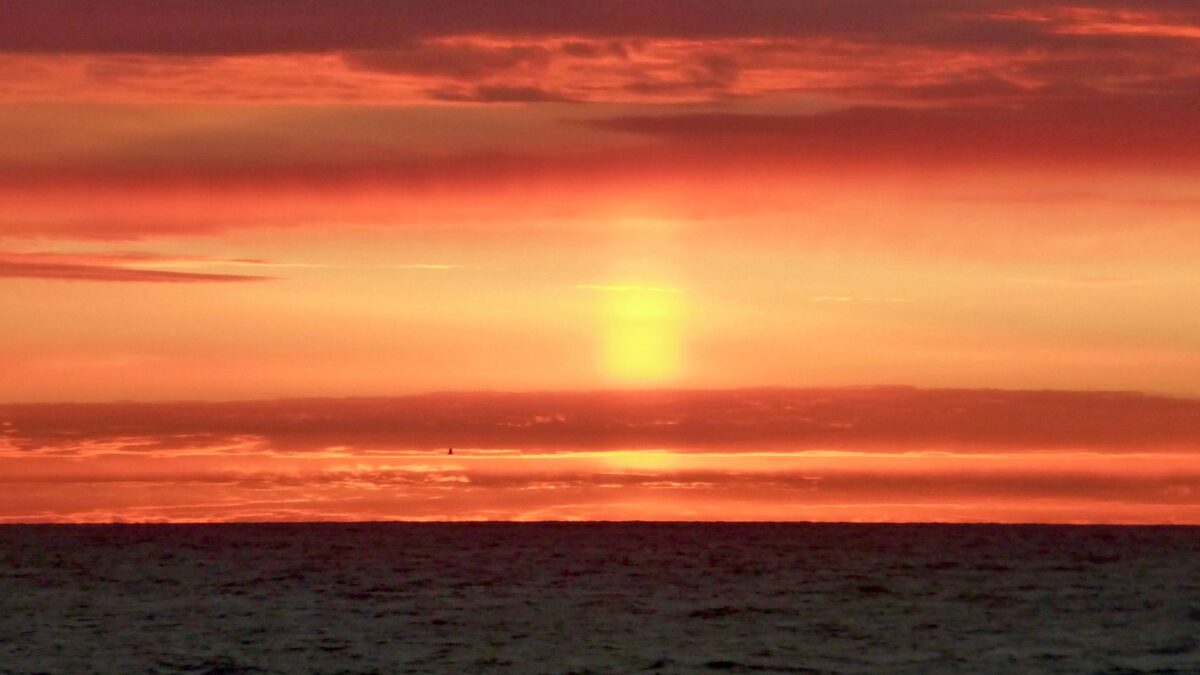 Jules Vern’s “Le rayon verte” is the rarest green flash phenomenon. This is as close as this photographer has ever come to capturing it, and she’s only seen it twice in a lifetime of watching the sun set over the ocean. Photos by Suzanne Guldimann
Discover

Looking for a bit of magic this holiday season? The beach at sunset is a good place to find enchantment. Autumn is the season of illusion on the local coast, when the weather conditions align to cast a strange spell. When conditions are right, the Palos Verdes coastline across the bay is stretched into monstrous cliffs and strange spires; the Channel Islands appear to float like UFOs or schools of vast fish; container ships become the towers of imaginary cities, and clouds are transformed into forests of impossibly giant trees.

This type of mirage is named “Fata Morgana” for the sorceress Morgan le Fay from Arthurian legend, and not even the sun is immune to her spell. It may appear to float like a ship on the horizon, or to be stretched and squashed  into the shape of a balloon, a heart, or even a top hat.

These illusions are generated by an inversion layer of heavier, cooler air that is trapped between the ocean and warmer upper air, creating a lens that generates fun-house mirror effects on a grand scale—stacking inverted projections of an object, one on top of the other, and then warping them into unrecognizable shapes.

Weather conditions have to be just right to create these mirages. A clear, warm Santa Ana wind evening after the wind has died down is ideal. This is also the ideal time to look for the elusive green flash.

“…A green which no artist could ever obtain on his palette, a green of which neither the varied tints of vegetation nor the shades of the most limpid sea could ever produce the like! If there is a green in Paradise, it cannot be but of this shade, which most surely is the true green of Hope.” That is how the writer Jules Verne described “Le rayon vert.”

The flash occurs just before the sun appears to vanish below the horizon. It only lasts for a second, but it’s a real phenomenon, one that before the advent of cameras was so seldom seen that it became almost mythical. The first color photo of the phenomenon was taken at the Vatican observatory in 1960. Today’s digital cameras enable almost anyone with patience to catch a glimpse.

As the sun moves below the astronomical horizon, the atmosphere works like a prism, separating the colors in the sunlight. The most common type of green flash turns the disappearing edge of the sun green, giving it the name “Neptune’s wink.”

Technically, the green flash occurs at every sunrise and sunset, but it requires the right conditions to be visible to human observers. This phenomenon gets a boost from the same inversion layer that generates the Fata Morgana mirages. The lens of cooler air that generates weird mirages on the horizon becomes a magnifying glass, increasing the density gradient in the atmosphere, and intensifying refraction.

Green and blue are weaker wavelengths than red and orange. They are only visible to the human eye under special conditions. With the help of the inversion layer, the green flash can appear as a zigzag of green above the edge of the sun, or more rarely, as a ray—Verne’s “rayon vert.”

The green flash can also sometimes be seen at sunrise, when the process is reversed and the flash appears immediately before the sun begins to appear above the horizon. In the Santa Monica Mountains an east-facing view where the sun rises from behind a mountain ridge offers the best chance of catching the phenomenon at sunrise. At sunset an unobstructed view of the horizon at the beach is the best vantage point.

Even the diminished light of the setting sun can damage the eye’s retina, so it is important not to look directly at the sun until the final moments of the sunset, just before the disk slips out of view and what is visible is the mirage, not the actual sun.

Mariners once feared the mirages named for the sorceress Morgan Le Fay, but tradition says that seeing the green flash brings good fortune. The opportunity to look for these optical illusions at sunset on a winter beach is in and of itself fortunate, regardless of whether or not one catches a glimpse of Verne’s “true green of paradise.”