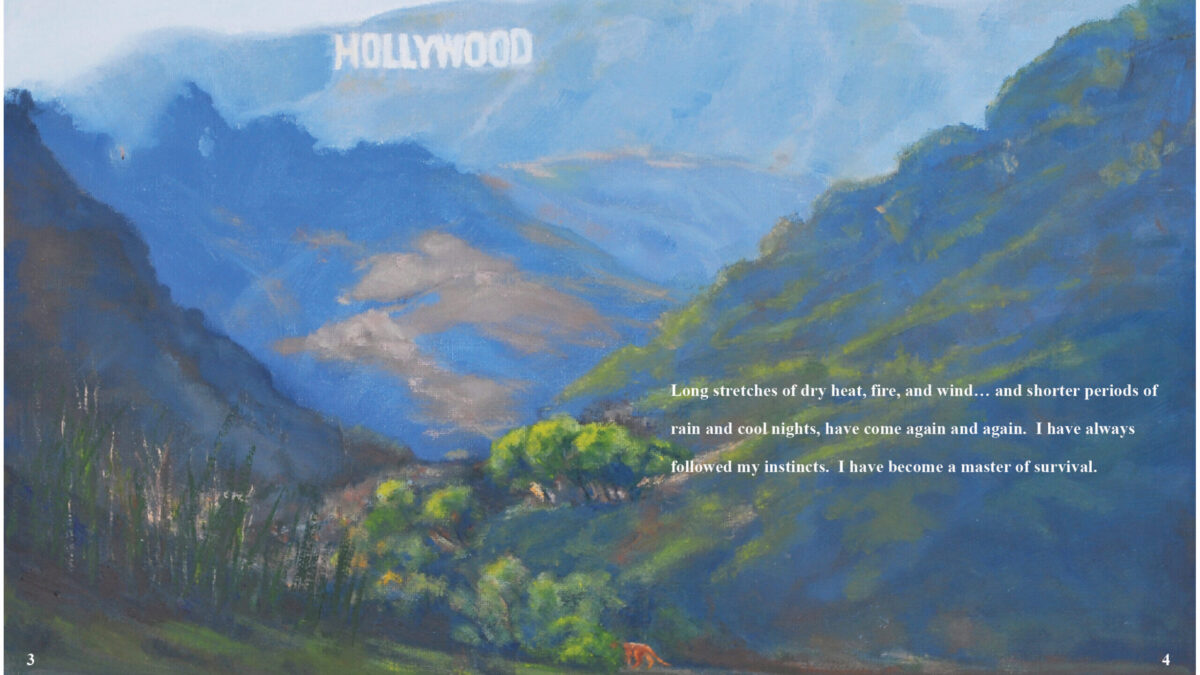 Mountain lion P-22 was catapulted to fame in 2012, when Griffith Park ecologist Miguel Ordenana first captured the big cat on film with a remote camera. Genetic testing revealed that P-22 was born in the Santa Monica Mountains, and that to reach his current home in Griffith Park he had to successfully cross two deadly freeways and some of the most densely developed parts of urban Los Angeles for almost a decade.

The Cat That Changed America

British-born author and filmmaker Tony Lee Moral is an authority on the films of Alfred Hitchcock and writes novels of mystery and suspense, including a recent supernatural thriller—Ghost Maven: The Haunting of Alice May—set on California’s Central Coast.

Moral is also a passionate advocate for the environment and the natural history of the Santa Monica Mountains. In 2017, he took time out from his favorite genre to make a documentary about P-22. The Cat That Changed America. The film explores the plight of the increasingly threatened local lion population, highlights the need for wildlife crossings like the one planned for the 101 at Liberty Canyon, and profiles the activists who are fighting to save the big cats from rodenticide, habitat fragmentation, and barriers like freeways.

Moral’s newest book is based on his documentary and shares the same name. The Cat Who Changed America book introduces young readers to P-22.

Moral turns the big cat’s journey into an exciting adventure. This is a chapter book written for elementary school readers, but is also an ideal story time book for younger children, although some of the content may be frightening for very young children.

Moral anthropomorphizes the animals in his story, sharing their thoughts and giving voice to their interactions with each other, but he deals realistically with how the big cats hunt, their territorial behavior, the hazards of crossing roads and highways, and with death.The darker aspects are tempered with compassion and a bit of humor in the form of a rough and ready raccoon who aids the protagonist on his dangerous quest for a home of his own.

The book features mountain lion facts and information on the National Park Service ecologists studying the big cats and the activists working to protect them. Moral also provides information on Poison Free Malibu, the local non-profit seeking to protect wildlife like P-22 from toxic rodenticides.

The Cat That Changed America is a fun and entertaining way to introduce young readers to P-22 and ignite an interest in conservation and natural history. The book is illustrated throughout with whimsical pen and ink sketches by artist Louise Goves.

The Cat That Changed America book is available from Amazon.com and Barnes and Noble. For more information on the book and on the film that inspired it, visit https://thecatthatchangedamerica.com

This is a poetic and beautiful account of P-22’s life in Griffith Park. It’s a gentle book, but it doesn’t shy away from serious issues, like the rodenticide that nearly killed the big cat in 2014.

In a special section at the end of the book, the authors introduce many of P-22’s defenders, including the Friends of Griffith Park, Poison Free Malibu co-founders Joal and Kian Schulman, Cougar Conservancy co-founder Korinna Domingo, and camera trappers Joana Turner and Roy Dunn, whose photographs have revealed the secret life of this and other Los Angeles-area “ghost cats.” Those photos provided the inspiration for Barbara Freund’s illustrations, which are painted in the artist’s luminous plein air technique.

This is an ideal bedtime book for young children and an excellent introduction to mountain lions, urban wildlife, and conservation for beginning readers, but it is also an attractive and meaningful coffee table book for adults.

P-22: The Park is available at Amazon.com, and at the local Malibu store Toy Crazy, in the Malibu Country Mart—23410 Civic Center Way, www.gotoycrazy.com

Combine one or both new books with a stuffed P-22 toy, mountain lion mask, or t-shirt from the savelacougars.com shop, where a portion of the sale will go to help conservation efforts, for the ultimate P-22-themed holiday gift.

Philip Daughtry: Runaway Angeles. Daughtry’s poetry is sparse and thoughtful. Each word is carefully chosen, smooth and well rounded as a pebble shaped by the tide, tough and durable as an old root. Runaway Angels is a collection of poems honed by a lifetime as a poet. This is a powerful and moving collection of poems. Available on Amazon.com.

Jane Marla Robbins: Poems of Covid: Stuck in Lockdown, the First Three Months. Topanga poet Jane Marla Robbins reflects on life during the first three months of the coronavirus crisis in verse and photographs. Robbin’s poems recount everyday joys and sorrows as she grapples with the new normal we all are facing. Despite the uncertainty of the time in which the poems were written, this is ultimately an optimistic and uplifting collection. https://janemarlarobbins.com

Claire Fullerton, Little Tea. Malibu resident Claire Fullerton’s latest book is set in a small town in Arkansas, where three childhood friends have come together again as adults to reconnect and to put the hurts and traumas of past into perspective, The 2020 International Book Awards named Little Tea a finalist in the Women’s Fiction category, and the 2020 Chanticleer Reviews gave the book first  place in the Somerset Awards for Literary Fiction. https://www.clairefullerton.com

Douglas Woods: Ladies of the Canyon. Douglas Woods is a longtime film industry writer and producer who published his first novel this year. Woods lives in Topanga, but as  the title taken from the song by Joni Mitchell suggests, the eponymous canyon in the title of his book is Laurel Canyon. This is a well-crafted thriller. https://www.writewoodink.com/novel

Matthew Leising: Out of the Ether: The Amazing Story of Ethereum and the $55 Million Heist that Almost Destroyed It All. Matthew Leising’s new book is nonfiction, but the story it tells is a real world thriller that reads like a 1990s sci-fi bestseller by Michael Crichton. @MattLeising

Emeran Mayer: The Mind Gut Connection. Topanga resident Emeran Mayer is Distinguished Research Professor of Medicine at the G. Oppenheimer Center for Neurobiology of Stress and Resilience, and an authority on the connection between stress and digestive diseases. His book on the subject is fascinating and timely during the current increase in stress related health issues stemming from the coronavirus crisis. Look for his new book, The Mind Immune Connection, in 2021. Emeranmayer.com

Lara Clear: Dakota The Therapy Dog Goes to the Airport. Actor, filmmaker, and Topanga resident Lara Clear’s three-year-old “Bernedoodle” therapy dog Dakota is the star of this picture book, illustrated by Katie Watts. Dakota travels with Clear to visit children in hospitals and at schools. The idea for a series of children’s books featuring Dakota came to Clear while she was recovering from COVID-19. This first installment in a proposed 10-book series helps young children get comfortable with the idea of traveling by plane. It’s a gentle, sweet book. @laraclear

David Dayan Fisher: The Bu Ddhas. Once upon a time there were three little dogs named Bu, Monkey and Mika. Since Bu was the oldest and also very wise, Monkey and Mika watched him and followed his lead. And they came to be known as the Bu and Ddhas. This charmer of a story is best read out loud and will entertain young and old alike. www.daviddayanfisher.com

Sue Ganz-Schmitt: Now I’m a Bird and The Monster on the Block. Topanga resident Sue Ganz-Schmitt published two delightful picture books this year. Now I’m a Bird, illustrated by artist Renia Metalinou is a gentle story about being different and fitting in with autumn-themed images; The Monster on the Block, with illustrations by Luke Flowers, shares the theme of acceptance and tolerance, but in a colorful town inhabited by monsters. Both books are delightful bedtime stories and equally fun for early readers. www.sueganzschmitt.com

Let There Be Light: A Drive-Thru Holiday Celebration