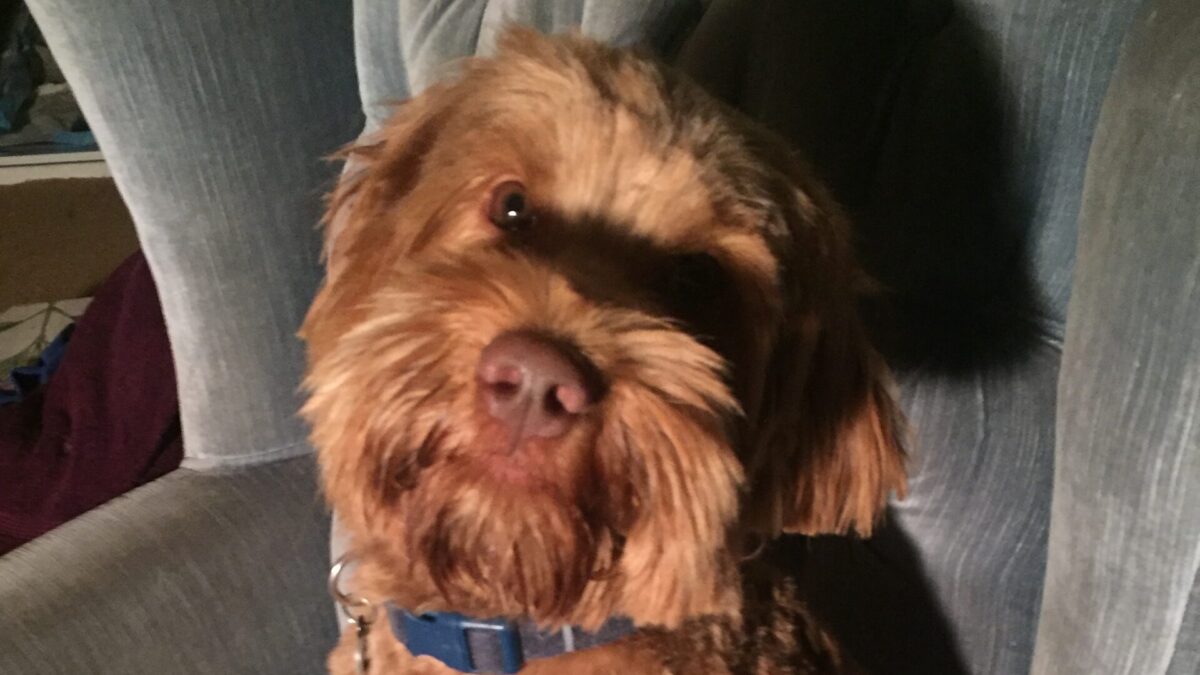 A couple of years ago on Christmas Eve morn, I was on my way to work at the Winter Sports School at Mountain High, the closest ski resort to Topanga Canyon and the Santa Monica Mountains. It was early and frost crystals sparkled on the black road that cut through Lone Pine Canyon. Since Lone Pine is a shortcut used mainly by locals to the mountain village of Wrightwood, there were no other cars. I was nearing the top of the grade, where high desert chaparral meets alpine forest. In the middle of the road, catching a few warming rays, sat a dog. Or perhaps, so shaggy was he, a small wookie. As my car approached, the creature loped away – a jaunty skip to his step. The two of us were miles from anywhere. A dog out there alone was just wrong. I pulled over and got out to investigate.

I climbed the rocky embankment and scanned the foothill of manzanita and sagebrush. There he was. I called, Here, Scruffy! But the rogue kept his distance. Late for work, I snapped his photo, and also took a picture of a distinctive roadside boulder, so I could find the place again. I left my sandwich and drove on.

I arrived late at the teaching slopes, apologizing to my supervisor Terry, a former air traffic controller, as it was a busy holiday. Between classes, I showed the picture to my cohorts at the instructor yurt. Only the dog’s shaggy copper-colored head could be seen, looking sunlit and tiny against a vast gray wilderness stretching to the horizon. The instructors looked at the picture and turned solemn. How could the pooch survive when we, layered in Gore-Tex and SmartWool, were freezing? We were in the grips of a severe polar system.

After work I bought kibble and pull-top, canned dog food. I drove out of town, descending into the canyon and looking for the landmark boulder. The location was confirmed by two unwanted tomato slices lying where I’d left the sandwich.

I ambled, looking under creosote bushes and behind spires of yucca, and scanning the stony, snow-patched panorama that turned to steep alpine walls in a hundred paces. I set out bowls of food and water, and called “Scruffy” to dinner in a high, shrill voice, muted by the icy wind. It was nearly dark by the time I got back to the car, sad at my failure to find the dog. As I pulled onto the highway, I glimpsed in my rearview mirror. A shaggy head poked out from the roadside bushes watching me drive away. My heart leapt. The rascal was there. He was skittish and had no intention of coming near, or letting me near him. At least he would have a full belly, I thought, dreading the freeze coming down with the setting sun. The dog’s lonely plight was a stark counterpoint to the festive Christmas Eve dinner where I was headed.

I said a prayer for Scruffy, wondering if it was okay to pray for a dog, with so many un-housed people.

Next morning I was driving up the canyon with prime rib leftovers, having allowed time to befriend the pup. I parked near the boulder. The food bowl was empty. The water had frozen to a solid block of ice. I called, striding deeper into the scrub brush landscape. Thirty yards away, a head like a copper mop popped up. Delighted, I knelt. Who’s a good boy? Scruffy’s a good boy! I took a step forward. He trotted back. I stopped. He stopped. We repeated the wary dance steps until the dog lay down under a mesquite tree, a safe distance away, smiling at me. There was no way he was going to let me catch him. And I didn’t want to chase him away. I had to get to work. So I left fresh food and water, promising to return. This was a good first step. It took time to build trust.

But a storm was coming, threatening record low temperatures. Even seasoned ski pros and the gnarliest of snowboarders were darting inside the yurt to hold their hands and faces to the heater. We instructors were treated to fancy roast beef dinners in to-go cartons – because that’s how we roll at Ski School on Christmas. The merriment was dampened, however, by my thoughts of the dog, alone and fending for himself, and his unlikely chance of survival.

My colleague Frank gave me a dry cardboard box, saying, “If he can hold a little body heat …”

Inspired by that, I snagged a large rubber trash can and headed off to the dark canyon. Trying not to think about zombie “walkers” and vampires, I put the box in the trash can, dragged it to a ditch, covered the whole thing with a camo tarp, and weighed down the edges with rocks to hold it down during the storm. I dribbled a trail of roast beef and gravy leading into the (relatively) warm, insulated trash can interior. I yelled the ritual Scruffyyyyip! before driving to my warm cabin.

Next morning the roast beef was untouched. Scruffy hadn’t found our provisions. The water was again solid ice. My heart felt just as heavy.

I don’t remember where I got the idea for a trap. It seemed so over-the-top at first. Then I learned humane traps are routinely used in stray dog care, and kicked myself for not setting one before the storm had hit. I couldn’t find a rental, and the trap I wanted cost over $100. I asked my supervisor Terry if he had a trap, because I knew he lived on a remote property that had been a zoo in the 1930s, and had remnants of odd contraptions. He did not, but rubbing his beard, Terry said, “I must know fifteen women in the village who rescue dogs.” Phone calls were made, which resulted in Corina lending me a 36-cubic-foot humane trap. It barely fit in the back of my Subaru.

My son Wes helped set it up, using hot dogs for bait. The covering tarp and a towel over the trip-plate would keep our quarry warm.

An active trap must be checked every two hours. I took the day off to monitor it, staked out in my car on the canyon road in high anticipation. But there was no sign of Scruffy. I went back to work, and my husband Kris assumed the vigil, always finding the trap empty. The little dog hadn’t been seen in days. Hope dwindled. Face it, I thought, the mutt was just one among millions of doomed dogs.

New Year’s Eve was celebrated with friends from Austria. We went to the slopes to watch the torchlight parade snake its way downhill. Back at the cabin Franz performed a tap dance and I, an Egyptian cabaret number with a cane. Kris spewed high-proof flaming rum from his mouth. With all the diversions, I hadn’t checked the trap in six hours. But I’d refrained from drinking, knowing the last thing I wanted to do that year was look for the dog.

At 11:30 p.m. I left the party and drove into the canyon. Though just a fifteen-minute drive, it felt like travelling to a distant galaxy, stark, solitary, inky and frigid. I parked and climbed up the embankment. Right away I sensed the trapped animal, though I couldn’t tell whether the tarp concealed a mountain lion, bear, coyote, raccoon or dog. I could smell him. (Not – as the kids accuse – that I was now such a trappeur I could ferret out beasts with my keen sense of olfactory. The creature reeked!) I lifted a corner of the tarp. A silhouette of matted, ragged fur cowered inside. I dashed back to the cabin for help. As Kris and Franz lifted the cage into the car, there was a bark. “Your life just got a whole lot better,” Franz answered.

On New Year’s Day a groomer spent five hours cutting badly matted fur. The coat had hardened practically into a horn, tight and unyielding, and squeezing circulation to the growing legs. Snipping the dreadlocked face revealed frightened, chestnut-colored eyes taking in light and the wide world of vision. A bath revealed a shy, skinny labradoodle. Judging by the leathered fur, the vet estimated that the dog had spent a year in the wild – most of the dog’s life.

Once his coat was coiffed to red-gold waves, and sporting a teal bandana and sweater over his bony frame, the name Scruffy didn’t suit. Lucky seemed an apt name, but didn’t give deserved credit to the dog for surviving his puppyhood in the wild. His name is Bosco.

I made half-hearted attempts to place Bosco in a good home, finding a reason to back out of every offer. His home is with us. Though skittish at first, Bosco is a snuggler, a tail-wagging ball chaser, the Scooby Doo of the Ski School yurt, with a penchant for hilarious antics. Bosco has found his pack.