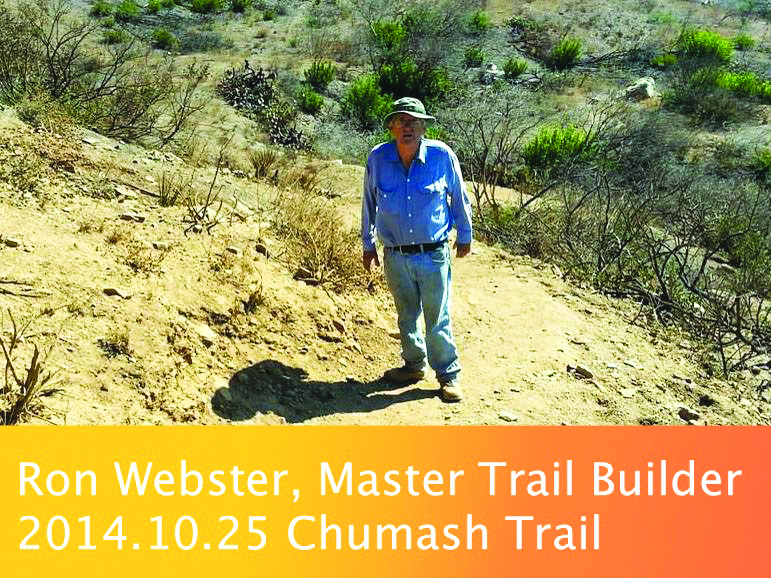 On behalf of the National Park Service (NPS) at Santa Monica Mountains National Recreation Area, we would like to offer our condolences to the family of Sierra Club Trail Builder Ron Webster, who passed away on January 7, 2021.

We owe a tremendous debt of gratitude to Ron who built 31 miles of the 67-mile Backbone Trail (along with most other trails in the Santa Monica Mountains). For more than 40 years he designed and built trails as the leader of a volunteer trail crew for the Sierra Club’s Santa Monica Mountains Task Force. He also trained countless youth corps who assisted with trail construction. The first trail Ron and his crew built was the Dead Horse Trail in Topanga State Park.

Ron went about trail-building with great passion, enormous energy, and a keen eye for aligning the trails. His philosophy was that a trail offers a glimpse into the wilderness and that it should “lay lightly on the land.”

In 2017, the NPS nominated him for the Lifetime Volunteer Achievement Award at the California Trails & Greenways Conference. Ron received the award and accepted it at the conference that year.

Today, his trails do, indeed, afford that glimpse of spectacular natural resources and inspiring views to be found in the Santa Monica Mountains, and they are incredibly popular.

When asked what it was like for him seeing so many hikers taking pleasure from trails that he built, Ron responded, “I kind of enjoy seeing people walk all over my best work.”

Ron Webster’s eternal legacy is the many trails in our local mountains that people tread on every day. We thank Ron, and his wife Mary Ann, for this enduring gift to the American public.