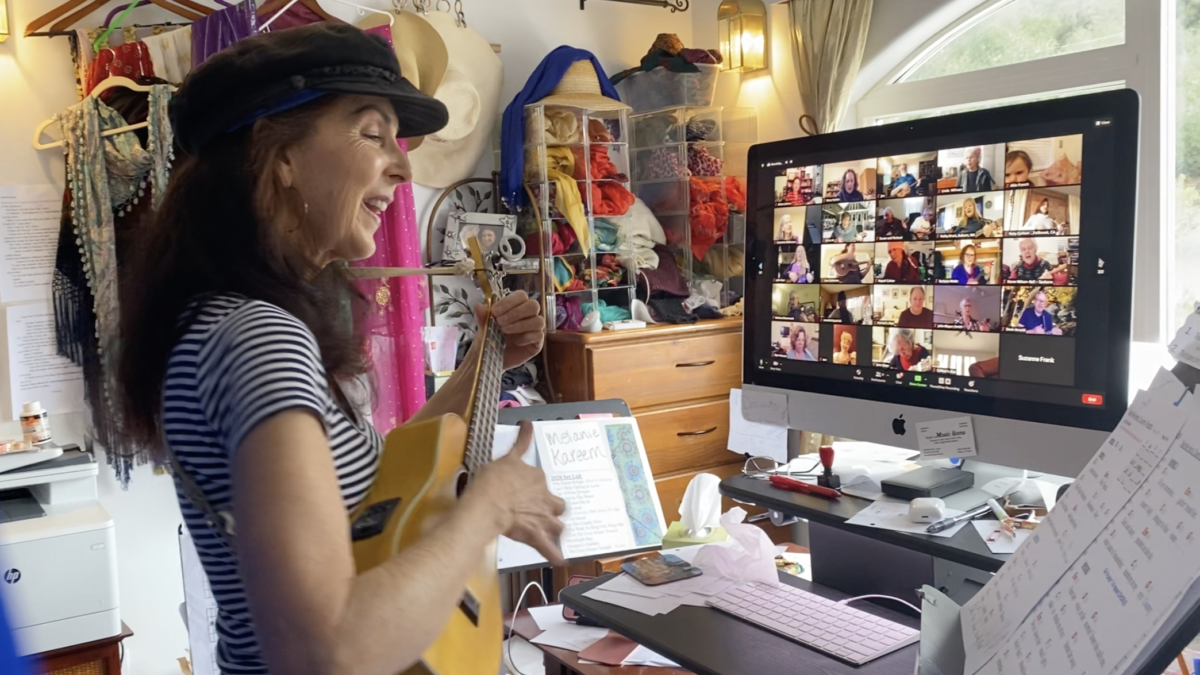 Look all around, there’s nothing but blue skies.

Look straight ahead, there’s nothing but blue skies.

Welcome to Melanie Kareem’s virtual ukulele group, where Johnny Nash’s lyrics are accompanied with an “island strum,” and the participants have found a daily blessing in the middle of the coronavirus crisis.

These new ukulele players have counted the last 303 days straight —not of quarantine, but of musical sessions via Zoom. They’ve learned to play ukulele, sing, and process the disruption of the past year in fellowship. The sciences may end the pandemic with precious vaccines and treatments, but the arts make it survivable, and even, in the case of Melanie’s classes, a blessing.

Born in Pasadena, into a family of international folk dancers, Melanie Kareem established her first School of Middle Eastern Dance in Arcata, California after a year at Humboldt State University. For the past twenty years, her snake-charming, silk-swirling, cymbal-ringing tribe of dancers has been a hallmark at Topanga Canyon festivals; as well as at professional performances, including many with her husband, renowned drummer, Jamie Papish.

Belly dance in Melanie’s studio (which is temporarily “on hold”) is known as a transformative exercise, engaging all generations in personal growth, world culture, and acceptance of one another and of self. Melanie Kareem herself has metamorphosed, bringing the qualities of her dance studio to new daily Zoom music lessons called Get Started Playing Ukulele.

Melanie branched into music in homage to her late father, Charles Lawson, who was a mathematician, world-class folk dancer, and a “Johnny Appleseed” of ukulele mirth.  In 2015, she founded the Topanga Ukulele Revival, which struck an enthusiastic chord among local players of all levels. Sixty or so members between the ages of 6 and 85 cycled in and out of the open-invitation, musical hee-haw. The Topanga Ukulele Revival performed at the Pierce College Swap Meet, Earth Day, four Topanga Days Festivals (2016 -2019); both Topanga Literary Festivals, and Fourth of July at the Theatricum Botanicum. The group’s last performance was a year ago at the memorable Flying Pig Supper Club, hosted by Michael Anapol and Kathie Gibboney, at the Topanga Community House. The Topanga Ukulele Revival was going gangbusters until the pandemic struck. Last March, they had to abort their Topanga Day’s practice at the library for safety’s sake, and practiced instead via Zoom (back when nobody knew how to work it).

“I’m not doing anything tomorrow…” each realized, meeting again the next day. Once the group got going they couldn’t stop, having cast emotional lifelines to one another, and the habit has not been broken for 303 days straight (except for a smattering of days due to threats of wildfire, power outage, and major holidays), sustaining these kindred spirits through the nightmare of 2020. This is the origin of Melanie Kareem’s “Patron group,” named for the core group of patrons who have kept the program going with their contributions and participation.

Today the Patrons are international, including ukulele players from Vancouver to Topanga Canyon, and points far-flung and in between. The group is private, and donation-based on a blind honor system. Twelve to fifteen or more players sign in daily for the Help Session, Beginners Class, and the Intermediate Collaboration Session, which also includes experienced players. New songs are learned, and mastered, and old favorites are revisited. Chords and transitions are drilled. Every voice is pedestalled. Eminent guest instructors drop in just for love of being with the group. To the Patrons, the daily gathering is much more than a music lesson.

Lisa Solomon of San Diego calls the lesson “happy medicine,” and “a blessing of the coronavirus, because I absolutely never would have tried out ukulele without the pandemic.”

Ron Fomalont of Topanga Canyon attends to learn a new skill, an activity he can share with other Patrons in his family, including a daughter in New York.

For Joe Croco of Redwood City, California, the lesson is a high point of every day for he, his wife and their cat Sophie, who snuggles atop the contours of Joe’s ukulele, against his flannel shirt, purring as Joe strums in the rocking chair.

Julie East credited the group’s cohesion to Melanie’s personality, saying, “There’s not many people who I’d want to spend an hour with every day.”

As each new singer takes the next verse, a different frame on the Zoom screen enlarges, switching from an older woman in her kitchen to a hip college kid in his bedroom. Relationships have grown close as together the Patrons helped each other digest the miserable events of last year. They eulogized singer-songwriter John Prine’s death from Covid-19, by playing “Paradise.”

After the George Floyd murder, they sang Sam Cooke’s “A Change is Gonna Come.” The session is a place for discussion and to air opinions, and delve deeper into songs.

Class is long over and the Patrons are still on-line, talking, filling the joy cup.

Barbara Webb, aka “Babsi,” has buoyed the Patron group since its inception as scribe and co-curator of the group’s direction. (Babsi and her husband, Oscar, led the tango movement in Topanga until the pandemic hit.)

Newcomers to the Patron group are personally vetted by Melanie, not for ukulele experience, but for fitting with the group’s focused yet supportive culture; and feathered in so as not to dissipate the energy created by the original members.

The good news is that the same attentive teaching approach and snappy materials, the same welcoming space and shortcuts to joy that Melanie Kareem employed to develop the Patron group will soon be available to everybody who wants to Get Started Playing Ukulele (as the program is called.)

Thanks to an SBA loan, part of the pandemic stimulus package of last summer, Get Started Playing Ukulele has been able to increase computer capacity, improve production equipment, and engage the expertise of digital media and marketing specialist Jazmyn Whitman (who can also balance a sword on top of her head while belly dancing,) and administrative assistants , Sierra Friday and Mia Klemp (Topanga teens.)

As a result, aspiring ukesters may subscribe to Get Started Playing Ukulele at www.SeeUZoom.com, and join a 45-minute daily lesson for $30/month. Students will also need wifi, a computer with Zoom, and a ukulele. A beginner may expect to spend $150 for a (large sized) tenor ukulele. The program is geared mainly for adults, and seems especially appreciated among seniors and homeschoolers, and anybody stuck in their homes.

One challenge will be to scale up to potentially hundreds of new students, while maintaining the personal and supportive charm of the Patron group. But Melanie’s a community-builder with a bright philosophy:

Instead of, “I can’t do this,” her students will tell you that Melanie’s maxim is, “This is a struggle for me now, a challenge that I’m excited about being able to accomplish.” For more information on the Ukulele Patrons and Melanie Kareem, visit https://www.melaniekareem.net/ukulele-patrons

The Power of Clarity