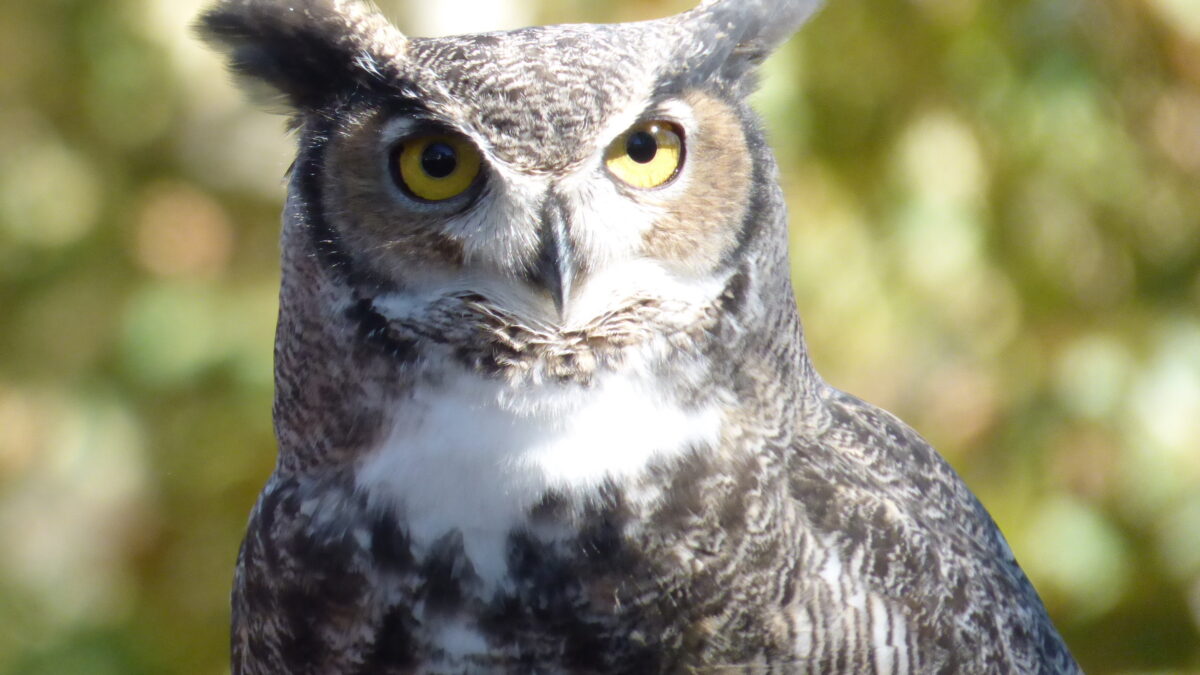 Portrait of a great horned owl. These intelligent, long-lived raptors are an important part of the ecology of the Santa Monica mountains, and a much loved presence in Topanga. All photos by Suzanne Guldimann
Discover

Every winter, canyon residents are treated to what sounds like a treetop woodwind concert, but the music isn’t intended for a human audience, instead, it’s the love song of the great horned owl.

The male great horned owl usually begins singing his song in early January. The love duet between males and females only occurs for a few short weeks in late winter, but the males continue to vocalize: the conversation switching from romantic to territorial, once a pair mates.

The male great horned owl guards his mate and hunts food for her while she incubates the eggs. He also provides food while the chicks are too young to be left alone. Later, both parents share the task of feeding their chicks, and continue to keep a watchful and protective eye on fledgelings as they leave the nest during the summer, coming together again in winter to mate and cooperatively raise the next generation of owlets. They can potentially spend many years together, because this is a long-lived species.

The average life expectancy is five-15 years, but at least one wild owl is documented to have lived to be 28, and a captive owl at the San Francisco Zoo lived to be more than 50.

We have four owl species in the Santa Monica Mountains: the great horned owl and its smaller “horned” relations, the Western screech owl (Otus kennicottii), and the long-eared owl (Asio otus) (those “ears” are actually tufts of feathers). The barn owl (Tyto alba) also makes it home here, often right among humans in old sheds and outbuildings. It doesn’t have head tufts, but its pale feathers make it easy to spot, and it can sometimes be seen hunting in the early evening before it is fully dark.

Great horned owls are the biggest owl species in the Santa Monica Mountains. Adults can have a four-and-a-half-foot wingspan. This species is widespread and distributed throughout much of the world, but we have our own special subspecies in California: the California Great Horned Owl: Bubo virginianus pacificus.

This is a formidable hunter that can tackle prey that weighs more than it does. Powerful claws give it a vice-like grip comparable to some eagles and much stronger than that of a human’s hands. Their size, hunting skill, and striped feathers have given them the names “cat owl” and “tiger owl”.

Great horned owls were hunted aggressively throughout the early 20th century. They’ve made a strong recovery and have adapted remarkably well to urban life, frequently making their home near humans and nesting in garden trees and even sometimes in buildings. This species doesn’t build its own nest, preferring to repurpose hawk or crow nests. They also take advantage of the crooks of large trees and flat places in an attic or abandoned building. Nest boxes usually work better for barn owls or screech owls, but a big enough nest box or a nesting platform may attract great horned owls.

Feeding young owls is a full time job. Great horned owls will eat almost anything they can catch—insects like grasshoppers and “potato bugs”; other birds, including some surprisingly large waterfowl like ducks and coots; frogs and snakes; and even skunks. In fact, sometimes that smell in the air isn’t a skunk at all, it’s an owl that has been hunting skunks flying silently by.

Rodents are the most common menu item, and one of the reasons great horned owls are able to thrive in urban areas. Anyone who has ever dissected a great horned owl cough pellet—the fur and bones that the owl can’t digest—is familiar with the jigsaw puzzle pieces of mouse, rat, gopher, and ground squirrel bone contained within.

A great horned owl in the neighborhood means human neighbors are blessed with an expert, all-natural rodent elimination service, especially during nesting season, but the owl’s dependence on rodents puts it at risk from rodenticide poisoning. As successful as this species is, it is also fragile.

Rat poison has taken a heavy toll on all raptors, but species that prey primarily on rodents are especially at risk. Great horned owls are also frequent victims of vehicle strikes. Young owls are vulnerable to losing their nests during tree trimming.

Humans can help their owl neighbors by eliminating rodenticides, using care when cutting trees, and slowing down on the road at dusk and before dawn, when owls are most active.

Great horned owls are silent fliers—the velvet-like surface of their feathers help them fly with minimal noise. It’s always a thrill to see them gliding on silent wings at dusk, but most of us would never know they were present without hearing the distinctive call of “Who, who.”

This time of year, that call becomes an elaborate conversation or concert of hoots, cackles and shrieks, with a surround-sound effect as owls engage in this amazing musical performance from treetops all over the neighborhood. It’s an ancient song of love, a private conversation between intelligent beings entirely unrelated to humans that we are privileged to experience—something rare and wonderful to hear.